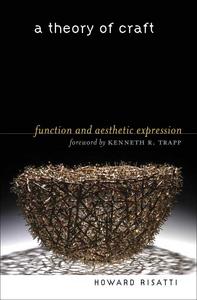 ~ by Jenn Craft and Anna Blanch

In part I of this post, we looked briefly at the way in which subsuming craft into a definition of art or imbuing craft with a lesser aesthetic value is problematic. This post offers an examination of a theory of Craft that takes a different approach. In order to do this, we will look closely at Howard Risatti’s defense of craft in his A Theory of Craft.*  Indeed, Risatti’s theory of craft suggests craft is something slightly different, but no less valuable, than art. It is a theory which privileges the process of making as a fundamental aspect, but does not do so at the expense of the finished work.

A Theory of Craft:
Risatti’s main contribution to the discussion is his attention to what exactly craft objects are along with what it is they actually do. While his theory may not be the defining word on the subject, he makes some helpful points for the discussion at hand.

First, rather than looking at the materials (glass, wood, clay) or technique (quilting, smithing, weaving), Risatti focuses on the function of the objects, that is, what they are actually made for. This is to be differentiated from “use.” While an object may be used in any number of ways other than what it was intended for (for example, a cup could be a paper weight or a painting could be a doormat), the function of the object describes the original intention. A cup was made to function as a container for liquid. Risatti divides craft objects into three main categories: containers, covers, and supports. By defining craft objects by their applied physical function, we are saying something basic about craft that is different from art. Mainly, craft objects, Risatti maintains, are universal to all cultures in the sense that they are made to help us physically interact with the world. Art objects, on the other hand, are specific to the culture in which they are created, so the symbolism invoked in a painting may not be comprehensible to someone outside of that specific context. So regardless of the specific design and aesthetic of a cup, all cultures need something to drink out of. But not all cultures will use or value a painting in the same way.

This is related to the intention of art and craft. Intention is one of the main ways Risatti differentiates art from craft, and he centers his discussion on craft’s physicality and objecthood. While he defines the intention of art as “communication,” the intention of craft is, first and foremost, to make real functional objects. For Risatti, art is first created within the realm of the conceptual and is only incidentally physical, but craft is first physical and then signifies additional meaning and concepts. This is one of the main places where some might take issue in his art/craft distinction. While craft is easily identified first by its physical function, we might ask whether art is only “incidentally” physical? Does an emphasis on physical objecthood really differentiate craft from art in the way that Risatti supposes? He at least makes a valid point: an actual bowl is different from an image of a bowl. The conclusions we draw from this fact are up for discussion, though.

Furthermore, he argues that all craft objects must be handmade. Mechanization takes away the connection with the physical, bodily action of making; “craft” then becomes “product” and no longer serves to connect people with the world around them. This is not necessarily relevant to his distinction between art and craft, since most art is also handmade, but it is important to note in Risatti’s theory since it plays a prominent role in the way he believes the making of craft objects connects people with the world around them. The process of making cannot be separated from how we understand the finished product and the role it plays.

Finally, in craft, function is related to aesthetic, utility with beauty. Aesthetic concerns aren’t taken away in craft production; they are just seen in close kinship with applied functionality. Risatti still wants to claim that just like you can make value judgments about art, you can make value judgments about craft. But generally, this is tied up in both the aesthetic aspects of the piece and the technical process. So if we judge a craft object to be “good’ or “valuable,” as it were, it will be well-made and beautiful.

Much more, of course, could be said on the matter of craft. What is perhaps most beneficial to note here is the distinction Risatti makes about intention in craft. He accepts the intention of art to communicate, though he does not deny the possibility of craft communicating; he simply suggests it is a secondary concern to function. In fact, the main value he finds in craft objects is that they merge the practical/physical with the conceptual/symbolical. In this way, the making of craft objects is related to Aristotle’s poeisis, knowledge that comes from making or producing something. Through craft, we simultaneously gain knowledge about the material world and are able to “place” ourselves conceptually within it. One might argue, however, that art does this in another, albeit slightly different, way. But even if we maintain that the process of making art fits within Aristotle’s category of poeisis alongside craft, we still have to ask the question whether the physical object and process of art is different from craft, and if so, what this suggests about their relationship and roles.

Despite these further questions, Risatti helps us identify some of the major things about craft objects that make them so important and special. In this way, he has contributed something valuable to the discussion and elevates craft once again to an arena of dialogue with, rather than subservience to, the arts.