[EDITOR’S NOTE: As our series on The Art of Church Architecture  continues, Taylor Morgan reflects on the unique design of Saint John’s Abbey Church in Collegeville, Minnesota. For more information, see our Series Launch.]

When I moved nearly 1,000 miles north across America to attend Saint John’s School of Theology and Seminary in 2009, I felt as if I were driving off the edge of the earth. The land was strange and beautiful to my southern eyes, but also silently foreboding.

Greatest among my fears was the looming prospect of the long, cold and dark Minnesota winter. Temperatures, I read, would push 40 degrees below zero, and by the winter solstice the days would get dark by 4pm. In an ill-fated attempt to convince myself I could survive there, I sought out writings of other daring travelers who had braved the great North.

Now, my small two-door car packed tightly with professional mountaineering parkas, wool socks, and a UV lamp, I approached the campus of Saint John’s University, home to the graduate theology program I’d attend as well as Saint John’s Abbey, a large monastic community that had chosen this place of cold and darkness as its members’ communal penance.

It was in the monastic rhythm that I found solace those first few weeks. With classes still a month off, I had nothing but time on my hands and knew no one. So, I began attending the public Liturgies of the Hours held by the monastic community. Three times a day — 7am, 12pm, and 7pm— I joined the monks and a handful of other adherents to pray in the quiet, cavernous, and strangely compelling Abbey Church.

In entering a building one also enters the historical context, themes, and imagination of those who designed it, and, in the case of a monastic building, the community that calls it home.

I had read of the building’s history but could not have imagined the experience of it. I knew, for instance, that it was built in 1961, designed by Marcel Breuer to accommodate the growing monastic and academic communities. A guiding theme was that of participation: members of the diverse communities which intersected here should be brought close into the services, a foreshadowing of the Second Vatican Council’s Sacrosanctum Concilium which was only a few short years away. 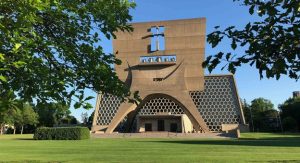 Yet, knowing history is far different from experiencing it made manifest in architecture. In entering a building one also enters the historical context, themes, and imagination of those who designed it, and, in the case of a monastic building, the community that calls it home. 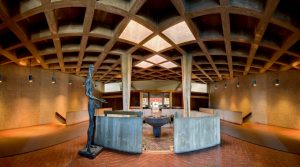 At Saint John’s, one begins this entrance from far in the distance, for the church’s wide bell tower is set on a hill and rises above the trees. It is a proud banner, like those set out before the tents of ancient times to mark the dwelling as special. Even before its bells are rung it invites the visitor to draw closer, to enter, and to join.

Upon entering the building, the sense of scale immediately begins working on the visitor’s imagination. The entry chamber is low and dark, with natural light settling from above into a large, recessed baptismal area below (the chamber, in fact, is called the ‘baptistery’). The stillness evokes a sense of waiting, and looking up at the ceiling one might feel they are standing beneath a chiaroscuro painting. 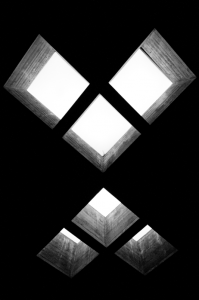 Then one passes beyond the baptistery and out into the main sanctuary, where the light and scale dramatically reverse. Leaving the low ceilings behind, the sanctuary is vast and open. No tall columns obstruct views of the altar. Instead, deep buttresses of formed concrete climb the walls and continue across the high ceiling, enclosing the space with a quiet show of strength.

The stillness evokes a sense of waiting

While the baptistery is bathed in darkness interrupted only by a single pillar of light, here the light rushes forth and fills the room. The chief source of illumination is provided from behind by one of the Abbey Church’s most striking features: an entire wall of vivid stained-glass hexagons.

Individually the hexagons are abstract, yet viewed together the abstract colors coalesce and form the window’s theme of sursum corda, or ‘lifting of the heart’ to God.[1] The light of God shines in the middle like a meteor, reverberating outward in streaks of red and orange against a blue sky. Yet the ripples of color also draw the eye inward toward the center, an image of returning and giving praise to God. Staring at the window, one almost sees real movement, as if the stained glass depicted not a moment frozen in time, but rather an active rhythm of God’s love and humanity’s response. 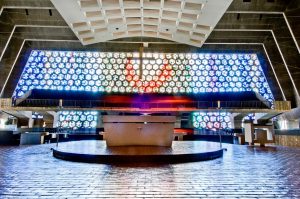 The hexagons themselves are also meaningful. Each ‘cell’ in the honeycomb-like structure supports and gives definition to the others, yet retains its own individuality. If each hexagon represents a member of the monastic community, the entire wall is an image of the Spirit shining forth through the diversity of the Church.

Directly above the altar is a skylight, a larger sibling of the one from the baptistery. It, too, sends a shaft of light down upon the sacred scene below. The light falls upon the altar and spreads outward, joined by illumination from the sides. Clear glass windows line the walls, but only along the base, drawing the rest of the ceiling into shadow. One can’t help but think of a waterfall, cascading down and outward, filling the empty chamber.

If each hexagon represents a member of the monastic community, the entire wall is an image of the Spirit shining forth through the diversity of the Church.

Between the skylight and the altar tables hangs a floating white ceiling, a baldaquin, with curved geometric lines and an array of downward firing lights. It hangs in the air like a layer of incense settling above the altar. One might feel they have stepped into the Old Testament, where ‘a cloud filled the house of the Lord’ (1 Kings 8:10).[2] In winter, when there is no daylight to be found in the early morning and evening services, the lights of the baldaquin shine down on the altar, setting it as a stage framed against the darkness.

Initially, I was taken aback by this stark, shadowy sanctuary, for it was nearly the opposite of what I expected a church in the far north to be. I had imagined a place of bright, warm, embellished beauty; an act of defiance against the stark reality outside. Yet here there was beauty amidst cold concrete and dark shadows. The sense of the sacred was undeniable and hit me on a deeper level than a church of overt beauty could have.

Standing in the choir stalls around the sides and back of the altar, where those who attend the daily liturgies are invited to join the monks in prayer, I couldn’t help but find solace. Rather than ignoring the cold and darkness, this place invited them in and transformed them. Its very character was composed of a contrast between light and dark. The sanctuary seemed to say to me, ‘be not afraid’, for the Christian story had always been one of contrast: of emptiness and darkness that is filled by Christ alone.

The Bible is overflowing with imagery of light. From the first creation account, when darkness covered the face of the Earth until, ‘God swept over the face of the waters…and said, “Let there be light”’ (Genesis 1:2-3); through the Exile when Isaiah tells us that, ‘those who lived in a land of deep darkness—on them light has shined’ (Isaiah 9:2); and in the Gospels where the prologue of John boldly declares that, ‘the light shines in the darkness, and the darkness did not overcome it’, (John 1:5), the theme is echoed without restraint.

Here I stood in the Abbey Church, surrounded by cold, dark concrete forms, with light sweeping in and breathing life into the space, and saw salvation history portrayed in a more tangible way than stained glass ever could. I was inside an exegetical work of art. I was part of it.

As I waited for the academic year to begin, I returned again and again to join the monks in prayer, our voices filling the quiet space just as the light illuminated the darkness. It was a place built for the rhythm of liturgy. Between services the sanctuary was quiet, still, and waiting. Yet the expectant emptiness was itself sacred.

I was inside an exegetical work of art. I was part of it.

This rhythm was mirrored by that of the seasons, and on a smaller scale, of each night and day. My fear of them was replaced with an appreciation of the contrast they drew out in my own life: the play between darkness and light, solitude and community, need and fulfillment that would always be a part of me.

It was not until the heart of winter that I could see the Abbey Church in all its glory. The snow stacked up and climbed against the ground-level windows, a counterpoint to the strong buttresses directly opposite them. It was a sanctuary that, together with the world beyond it, told the story of our expectant emptiness and how God’s light illuminates and transforms it.

[2] Scripture quotations are from New Revised Standard Version Bible, copyright © 1989 National Council of the Churches of Christ in the United States of America. Used by permission. All rights reserved worldwide.