[EDITOR’S NOTE: This week Karen McClain Kiefer reflects on the antiphon ‘O Root of Jesse’ and the icon The Tree of Jesse. Gustav Klimt’s Tree of Life is also brought in for consideration. For more information on this series, see our Series Launch.]

O Root of Jesse, standing as a sign among the peoples;
before you kings will shut their mouths,
to you the nations will make their prayer:
Come and deliver us, and delay no longer.

When I consider a painting of the root of Jesse, I’m inclined to think of some sort of soft watercolour piece with a little green sprig sprouting from a stump in a peaceful grassy setting.

In the past few weeks, I have had the opportunity to consider two images in connection to the antiphon ‘O Root of Jesse’, both representing a significant tree: the icon titled The Tree of Jesse, selected by Jane Williams in The Art of Advent for her reflection on this antiphon, and Gustav Klimt’s Tree of Life. Both are far cries from that little sprig – both are quite gilded and not the kind of images I would naturally connect to the season of Advent. The first thing I notice about both is the gold, and then the busyness, especially in Klimt’s work.

In the icon, the entire tree is gold, from the roots through the trunk to the branches and leaves which envelop and support twelve figures. Williams observes that Jesus is a continuation of the trunk, which clearly looks like an intertwining of major shoots from the roots, consistent with his being ‘the Vine’ as proclaimed in Greek at the top of the icon (ἡ ἄμπελος). [1] 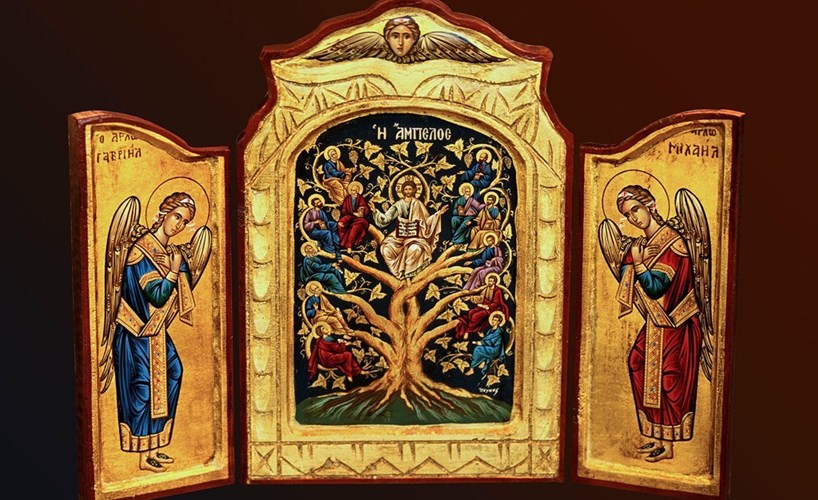 Indeed, Jesus’s position seems to be the heart of the tree where all things come together, which I find a very satisfying portrayal, especially given the connection of the tree to the earth beneath it. The roots are impacting the ground and earth. The glow from the contact indicates significant transformation of the earth, giving a sense of the inbreaking of Emmanuel and ushering in a satisfaction for an Advent connection to this gilded piece.

Ultimately, I reached a similar sense of Advent satisfaction with Klimt’s piece. While not a direct portrayal of the root of Jesse, or an intentional portrayal of the Tree of Life in the Garden, there is a great deal of symbolism of both through a Christian lens.

Klimt’s Tree of Life is a veritable feast for the eyes… almost to the point of overwhelm. This painting is from Klimt’s Golden Period late in his career, when he painted other well-known works like The Kiss and Woman in Gold. Tree of Life is a study for a series of three mosaics in a frieze for his 1905-1911 commission at the Palais Stoclet in Brussels.

Because of the bold colours and profusion of images of all sorts, Klimt’s painting may seem questionably suited for the liturgical season of Advent, given its summons to slow down and its invitation to contemplation. It seems ostentatious, incompatible with the quieting that Advent entreats, possibly even pandering to the glitz of Christmas consumerism and chaos to which Advent stands in stark contrast. 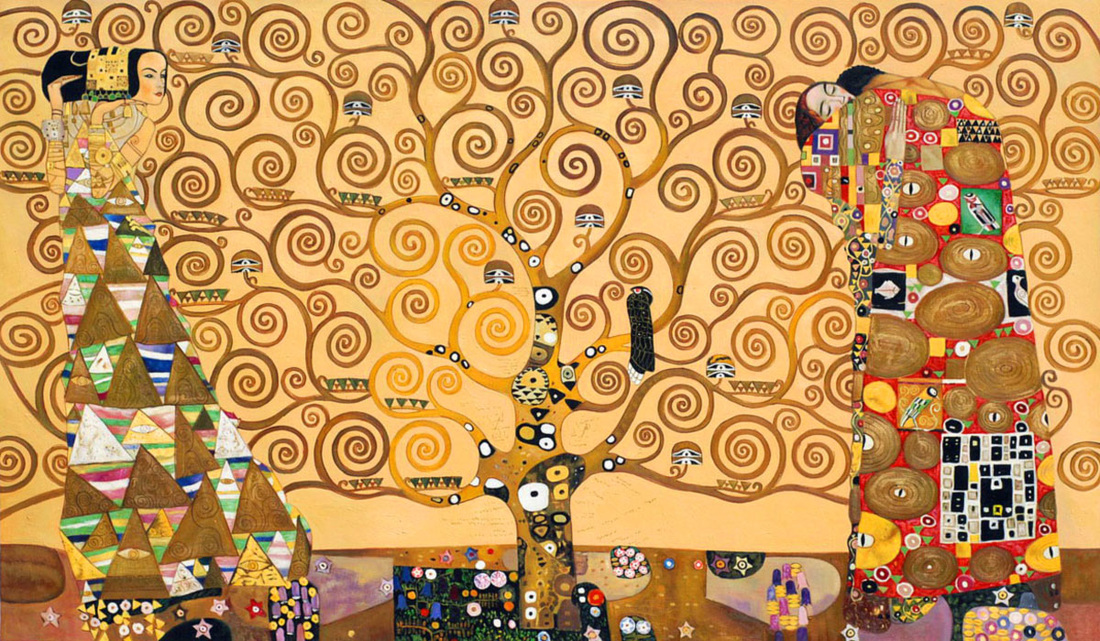 Yet, any doubt about this painting’s suitability for an Advent reflection is dashed upon discovery of the names for the two seemingly opposed images at either edge. On the left, the woman with Egyptian features and an associated gesture is called Anticipation or Expectation. On the right, the embracing couple is called Fulfilment. Between them is The Tree of Life. It is hard not to see some profound Incarnational symbolism there, especially as we enter into the season of Advent and wait in anticipation of the fulfilment of the promise of Emmanuel.

Once the eye settles in, this beautiful painting offers many gifts: there is a ‘horizontal’ temporal sense of anticipation and fulfilment, and a vertical sense of connected worlds which the Tree of Life spans, which also suggests ancestry or inheritance. As in the icon, the tree here is prominent, taking up most of the piece, especially with its many swirling branches. Consistent with the name, Tree of Life, I see the swirls as numerous pathways in life, not always direct, and likely with many tangents. I am drawn to the odd juxtaposition of the gilded-ness of the painting and the stark image of a stump in Isaiah’s proclamation which spawned the ‘O Root of Jesse’ antiphon (Isaiah 11), and I see in that contrast Advent notions of both remnant and icon.

An icon, usually gilded, is generally considered a visual representation that points beyond itself and the viewer to God, whereas a remnant contains and conveys something about what came before – the ‘prior’ or origin. In the context of this reflection and the Incarnation which Advent anticipates, a remnant also points to God as THE Origin. The Tree of Jesse image that Williams selected is an icon, and I believe that Klimt’s image is as well, even if not his intention – although his Golden Period is said to have been at least partly inspired by the gold-infused Byzantine mosaics of San Vitale in Ravenna, which he visited twice. Through a Christian lens, God is revealed in just about every image.

Klimt was inspired by Egyptian mythology in painting this piece, and some say he saw the couple on the right as Isis and Osiris, intimating his own search for love and eternity. However, through a Christian lens, we can see embrace, love, and union – perhaps God and Israel, God and creation, Christ and his Church, a new Adam and a new Eve, or the perfect Love of God embodied in an embrace.

Between them on the tree is a black bird usually representing death or forewarning it. We might see it as a symbolic reference to both the Tree of Life in the Garden, from which humanity fell through disobedience and was exiled, and the tree of the cross, through which humanity was redeemed through the obedience of Jesus, even to death.

In the vertical aspect, Klimt connects three worlds of concern to humanity: life, death, and eternity. He portrays a symbolic union of heaven and earth with the tree reaching upward from its roots in the soil from which we came and will return, which carries a genealogical connotation.

Isaiah proclaims that ‘a shoot shall come out from the stump of Jesse, and a branch shall grow out of his roots’ (Isaiah 11:1 NRSV). It was not out of abundance and thriving that this shoot emerged but from a remnant – and not a particularly attractive one – a stump… although it is consistent with promoting growth in a garden by pruning, sometimes cutting away all but a remnant.

Hope springs from the devastation, not separate from it.

The prophets often speak of a remnant – a remnant of Israel – a testament to both the devastation of Israel and its hope. In the devastation, something remains. This word ‘remnant’ and related images are found all throughout Isaiah. The prophet speaks of this remnant again soon after his initial proclamation: ‘the root of Jesse shall stand as a signal to the peoples… On that day the Lord will extend his hand yet a second time to recover the remnant that is left of his people’ (Isaiah 11:10-11). Out of desolation – comes life and abundance. After the fall of Israel, after the disobedience and fall of humanity, comes a shoot, which Isaiah prophetically saw grow into a mighty tree – that tree is Christ, come to dwell among us and to restore us from our exile to the Garden, to a place where everything finds it proper meaning and symmetry, just as Isaiah lyrically describes the world put right by God. All hope is not lost. We are grafted into the remnants deemed worthy by God of saving, even in our current fallenness.

Hope springs from the devastation, not separate from it. The remnant to which Isaiah and other prophets refer is also a kind of icon – it points beyond to the hope of the Incarnation and new creation with a restored relationship with the Creator and Master Gardener. Williams reminds us that Christ is both the root and the remnant into which we are grafted: ‘The Advent acclamation calls Jesus “the root” of the tree; he is not just its product but also its source’. [2]

Rooted in Christ, we have an organic connection to him, and therefore to each other as well, as fellow graftees. And since, as Isaiah proclaims, the Spirit of the Lord rests on him who is the shoot from the Root of Jesse in whom we are grafted and for whom we wait with anticipation, we too receive inspiration and can participate in the gifts of the Spirit. As someone who is increasingly reminded of my remnant status among new shoots, this participation is encouraging. Through the inspiration of the Spirit, thoughts, ideas, innovations, and creativity continue to spark, which I believe is true for all of us no matter how ‘stump-like’ we feel.

May we look with hopeful anticipation toward the fulfilment of the promise of the shoot rooted in the Creator and Gardener of the Tree of Life, recognising that we are also grafted in the remnant of what and who has come before, and especially the One who will come again. O Come, O Radix Jesse.