[EDITOR’S NOTE: As our series on The Art of Advent: A Painting a Day by Jane Williams continues, Tristan Cowell reflects on the Great Antiphon O Rex Gentium (King of the Nations) and William Blake’s painting Elohim Creating Adam. For more information on this series, see our Series Launch.]

William Blake’s painting titled either God Creating Adam or Elohim Creating Adam is one of a series of twelve large pieces done by Blake around 1795 using the same colour printing technique he employed for the illuminated books. None of the twelve are illustrations as such, but this one is likely a depiction of Genesis 2:7, ‘And YHWH-Elohim made the man out of the dirt of the ground and blew life’s breath into his face and he became man, a live thing’. Blake’s Adam is lifted out of the ground by his face and his eyes roll back towards it, and he seems to avoid the gaze of the one who has made him. Likewise, the one who has made him looks away into the distance. Both figures wear pained expressions. The dirt which has formed Adam’s leg holds a large earthworm still in situ, and his left hand and foot remain rooted in the ground. His foot resembles a hoof. 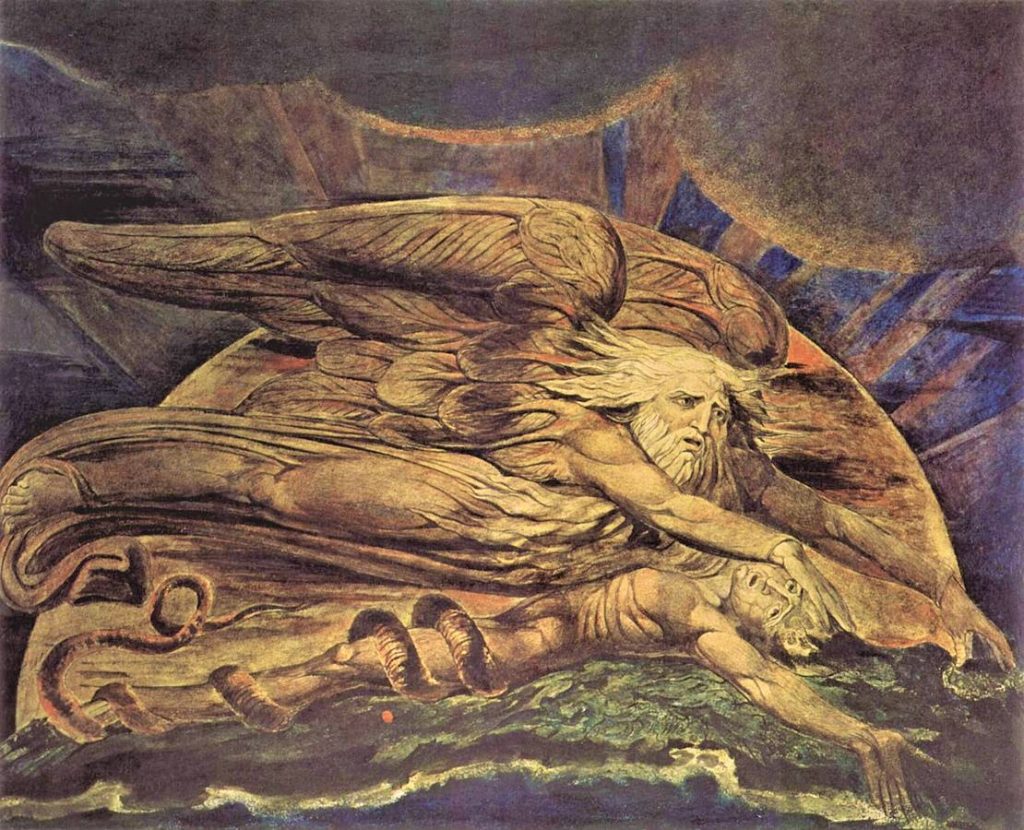 Certainly Blake’s vision of the Genesis 2 passage goes beyond the serenity of the biblical account. In emphasising Adam’s earthy matter, Blake seems to emphasise in the same stroke Adam’s wretchedness. Though a tempting interpretation of Gen 2:7, the text does not readily sanction the association of sinfulness and materiality. The whole of creation is material, but (even internally to the second creation account) it is never portrayed as other than good.

We should note that Blake implicitly appeals to the first creation account in this painting as well. There—and absent in the second account—humans are made in the creator’s image and likeness. Blake’s creator, though winged and lacking Adam’s hooves, appears basically to be a human.

That all humans are made in the image and likeness of God was a radical and liberating proposition for biblical Israel and remains so for the religions it generated. One of the most remarkable things is this—despite Israel’s awareness of being God’s chosen people, this Genesis text indicates that Israel understood all people, male and female, Jew and gentile, to be made in the image and likeness of their God. We must question, however, how radical and liberating that proposition can be if embedded in the kind of Marcionite framework of Blake’s personal mythology. ‘Elohim’ is the name of a figure in Blake’s mythology, the sub-ultimate creator of this material world and the judgemental deity of certain parts of the Old Testament. Now, it is not obvious whether this painting ought to be considered as a part of Blake’s mythology or as a straightforward biblical illustration. Regardless, his negative portrayal of Adam’s materiality betrays his unorthodox theology.

Another of the twelve large prints in this series, Christ Appearing to the Apostles after the Resurrection, depicts the risen Christ worshipped by his disciples; this scene appears to be based on Matthew 28:17, ‘And seeing him, they worshipped, but some of them doubted’. Perhaps the figure on Christ’s right in Blake’s print, who turns his eyes up to the Lord while his fellows look to the ground, is one of the doubters. Christ looks up to heaven. 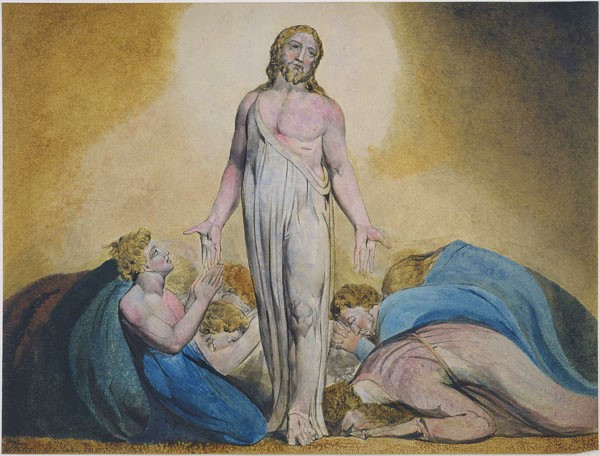 Blake, Christ Appearing to the Apostles after the Resurrection

Neither Matthew nor Luke mentions Thomas in reference to doubting the risen Lord, though both maintain that there were doubts over the risen Jesus’s materiality. John’s introduction of Thomas as the disciple who doubted at first but then believed may be a jab against gnostic groups who denied the risen Jesus’s materiality (amongst which groups the Gospel of Thomas was a favourite text). It is curious that Blake’s series of prints should include both the wounded and risen flesh of Christ, worshipped by his disciples prostrate on the ground from which all flesh is taken, and also the fashioning of Adam’s flesh from the ground cast as an inherently sinful beginning.

At what point in his life is Christ the king of the nations? Presumably when he is worshipped by his disciples after rising—and commissions them to spread the good news of his kingship—he is then the king of the nations. Earlier than that, the evangelists present Christ’s crucifixion as an enthronement (John 12:20-26).

It can be easy to forget that in the Gospel of Matthew, Jesus’s story is actually book-ended by people worshipping him. When the Magi come they fall and worship the baby Christ—and the same word for worship is used here as at the end of the gospel. Matthew, who is presenting a very Jewish gospel compared to those of John and Luke, nonetheless wants to emphasise that the gentiles worshipped king Jesus—and doubted not—even before his raising. Now this part of Matthew is embarrassing for a certain view of Jesus which wishes to see his passion and resurrection as the beginning of his lordship over the gentiles. In fact, for Matthew, neither Jesus’s enthronement on the cross nor his resurrection from the tomb is a novum with respect to his kingship over all the nations. Rather, all along, and eternally, Christ is the king whose image all his people bear. Let us end with an interpretation of Elohim Creating Adam probably quite opposite to Blake’s intention but more wonderful, namely, that the gospels warrant the identification of the winged figure in Blake’s Old Testament illustration with the man Jesus of Nazareth in his New Testament illustration.

Tristan Cowell is a research student in Divinity at the University of St Andrews. His research is in theology proper, especially relating to God the Father.