[EDITOR’S NOTE: This week in our series on The Art of Advent: A Painting a Day by Jane Williams, Regular Contributor Ewan Bowlby reflects on the Great Antiphon O Oriens (Dayspring) and the fourteenth-century painting The Harrowing of Hell. For more information on this series, see our Series Launch.]

O Dayspring,
splendour of light eternal and sun of righteousness:
Come and enlighten those who dwell in darkness
and the shadow of death.

It can often seem as if we live our lives under the oppressive gloom of the shadow of death, surrounded by the darkness of our mortality. So much time and effort are devoted to fighting off or evading death in modern society, as we battle to control and prevent disease, disguise the signs of ageing, or even seek to deny the reality of death. An awareness of our inevitable end hangs over us as a vague, threatening prospect, yet we choose to keep our eyes to the ground rather than face the looming presence blocking out our light. In the painting The Harrowing of Hell [1] the jaws of death lurk menacingly in the shady background as a terrifying vision of sharpened teeth, ferocious flames, and a glowering, malevolent eye. The hellish monster seems to be looking directly into our souls, easily penetrating the barriers we try to create between our own lives and the unsettling reality of human transience. 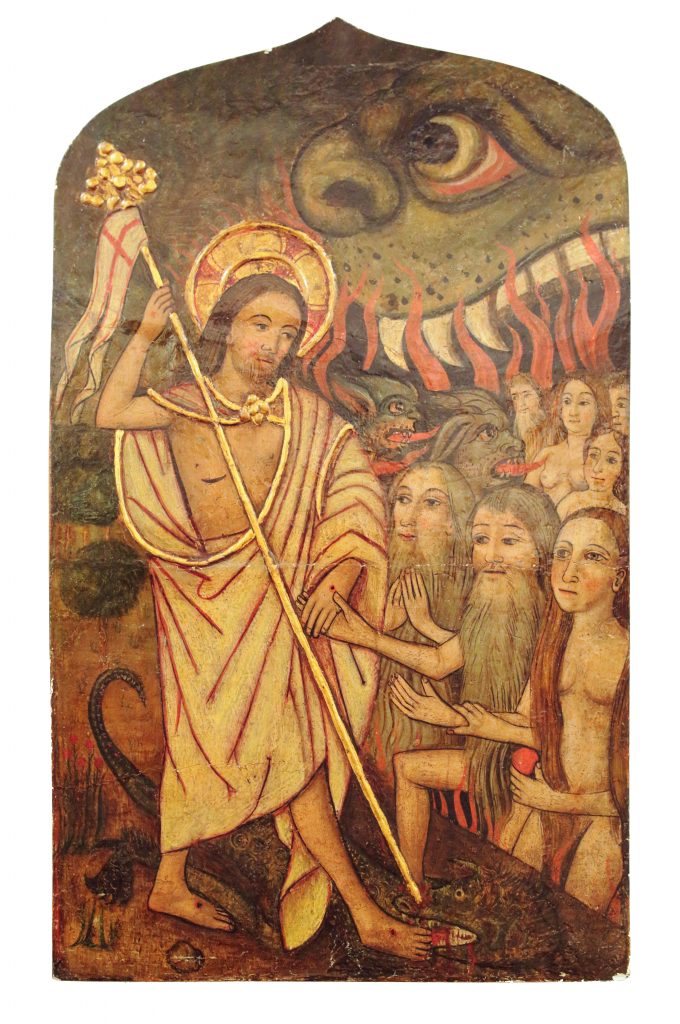 Yet the painting is not dominated by this embodiment of mortal dread but by the peaceful power of the Dayspring who illuminates the foreground: the ‘true light’ arriving in the world (John 1:9). The artist’s work turns the medieval tradition of Christ’s triumph over the forces of Hell into a luminous image of renewed hope. The Son of God who ‘cries aloud through death’s domain’ [2] brings a dawning light into the painting which spills out into the rest of its contents as it is reflected in the faces of those who have been freed from Hell’s deadly slumber. The image shows the darkness of death beginning to dissolve into the emerging dayspring light, melting into the awakening dawn of new life. We see in brilliant clarity that Christ is the coming light who has and will enlighten us when we cower in the darkness. The placid, serene demeanour of the Morning Star reminds us that the Son of God is not coming to fight with death or struggle against the encroaching shadows. His calm dignity asks us to recognise that death already has lost its sting and the grave’s victory is gone (1 Corinthians 15:55). Now, the absence of light behind the Dayspring only serves to accentuate the brightness his arrival brings to us, providing the contrast which draws our attention to the glowing splendour of the dawn.

Christ’s coming as the Dayspring is an invitation: an offer of life-giving light calling us to respond. The artist shows this in the faces of Adam and Eve as they greet the Incarnate Dawn. Each of the couple looks optimistic yet hesitant, unsure whether to embrace the arrival of the Light of the World. They remind us that when the shining Word of God first arrived to brighten the minds of believers, the world would not know him, and his own people did not accept him (John 1:10-11). As they shake off the sleep of death, the radiance of the Advent Christ still confuses and dazzles them. Eve clings to her apple and holds Adam back, whilst he reaches out tentatively and cautiously to take Christ’s hand, which is still marked by the wounds of the Cross. Those behind Adam and Eve are caught between the jaws of despair and the Lord of Life, balanced between light and dark as Satan’s minions seek to lure them back into the Valley of Death. The painting throws our choice during Advent into stark relief, illuminating the contesting forces which pull us in opposing directions during our journey into winter. It asks us if we will decide to step forward into the coming light or retreat into the familiar shadows of fear and doubt.

But how can we translate this cosmic struggle between light and dark, life and death into our own lives? What does it mean to await the advent of the Dayspring whilst winter nights close in around us? Perhaps it requires us to begin to see pitch-black despair as only a prelude to the brightness of joy. Romans 13:12 tells us that ‘the night is far gone’ and ‘the day is near’, enjoining the Christian to ‘lay aside the works of darkness and put on the armour of light’. In Harrowing of Hell, we see how darkness can be transformed into the advent of light, reimagined as an inexorable journey toward the dawn of new awakenings. In our own lives, the Advent season could become an opportunity to cultivate the kind of confident anticipation which can find the first fleeting glimpses of hope amid the unavoidable chaos of death and despair. The resplendent luminescence of Christ in this painting is already piercing the shadows of Hell. ‘Death has done all death can’, [3] so the victory is secured and there is no need to continue to fight against our approaching death. Instead, the artist depicts the fragile, hesitant smiles of those who have started to find their faith in the coming of a new dawn, expecting the breaking in of the Son which will flood the darkness of death with the Light of the World.

[1] Artist unknown. Painting is dated as the fourteenth century and is noted to be from Jerez de la Frontera, Spain.