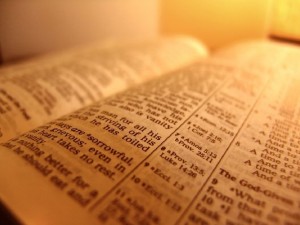 As I looked around my cottage-by-the-sea this week, I counted no less than five different English translations of the Bible with a German translation and Greek Interlinear thrown in for good measure. Those were just the hard copy versions. I’ve got the KJV, ESV, and NASB on my smartphone and about a dozen others available on my computer. If I wanted, I could access many many more through Youversion and BibleGateway.

So why is it that Transpositions, like so many others, is taking time to mark the 400th anniversary of the first printing of the King James Bible, an English translation authorised by the monarch of the same name?

In part, it is because of this translation’s legacy in the development of the literary and artistic imagination in the English-speaking world. The anniversary of the KJV also gives rise to questions about dialectic-specific translations, theology of communication and the artistic and imaginative handling of the Word as presented in and by this translation.

This is Transpositions’ first symposium on to a time-sensitive anniversary. In our own style, we’ve sought to approach this theme by seeking out a variety of artists, clergy, and writers who explore some of the ways in which the KJV can be understood in terms of theology, imagination and the arts.

The symposium began with Jim Watkins’ introduction of our featured artist, David Mach, and his KJV-inspired exhibition held in Edinburgh. Tomorrow, we’re pleased to welcome Professor N.T. Wright, who will be reflecting on the act of translation. Throughout the symposium, a number of posts will examine the various ways churches in the United Kingdom have marked the anniversary. We start with the installation work and participatory art facilitated by Carol Marples and Soul Marks. Rev Dr Joanne Cox will discuss a multimedia initiative by the Methodist Church that views evangelism as ‘sharing an old message’ in a language underst00d by ‘digital natives’. Rounding out the first week, Jennifer Allen Craft will review the play adaptation of The Cotton Patch Bible, a ‘translation’ of the Bible in a dialect from southwestern Georgia (USA).

Falling in the middle of this symposium is the 10th anniversary of the events of 11th of September, 2001. Writer and academic, Dr Greg Garrett, will be reflecting on this anniversary in light of the KJV. We’re also fortunate to have El Salvadorian composer Carlos A. Colón writing about music he has composed in response to the Bible, specifically the Book of Ruth. Richard Littledale will share details of a 24-hour Bible reading event, while I will write about The People’s Bible and the Viral Bible, two other participatory initiatives marking the 400th anniversary. Finally, we’re delighted to finish the week with a post by Makoto Fujimura that explores the gap between visual imagery and “word-based” theology.

We look forward to your comments, questions and discussion in what is sure to be a stimulating two weeks.