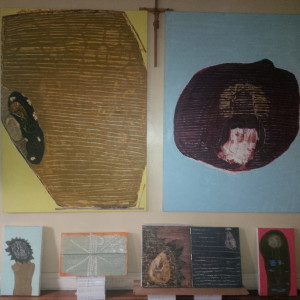 At my fidgety age I am less and less inclined towards spontaneity. I admit my guilt, though it may not be my fault. Ventures out into “culture land” can be dangerous to your health. But my wife Kazumi is persistent, planning all types of outings for us (and she is going whether I join her or not).

This past spring we went to The Cloisters museum and gardens, one of my favorite places. But I was in a bad mood by the time we reached the museum. Our uptown trip had been full of delays, the tourists were out in force and, before we went into this monastery, I took a short rest in the gardens with my pipe only to be accosted by a NYC parks worker informing me, rightfully so, that I was breaking the law by lighting up. Perhaps I should have stayed home with my pipe, paintings and books.

The moment you walk in – if you ignore the various smart phones and earphones – you can breathe that “age of faith” in all its glory. As we walked the cavernous galleries I became more aware; not so much of the art or relics on display, but of the way Kazumi was looking at them. Her gaze seemed so reverent compared to my strident attitude towards this whole adventure. She was unaware that I was watching her. Shockingly, I nervously took out my old BlackBerry, and took a few quick pictures of her gazing away (breaking my own rules of etiquette and snobbery). Of particular interest to her, and me, was a Retable with Scenes from the Life of Saint Andrew attributed to the Master of Roussillon (active 1385–1428). 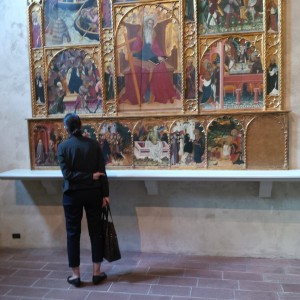 That image, the one of Kazumi looking at the Master of Roussillon’s retable, became my phone’s wallpaper. In order to scroll through the news, emails or texts on my phone I had to pass through this gatekeeper image: my wife, her gaze, the paintings and my gaze at her. The phone – which I am known to loathe – thus became a conduit. After a week or so I took some of my paintings and built some scaffolding out of them. Their themes, not of the life of St. Andrew, but of the life around me, the gift of summer creation: a hive, a pomegranate, sunflowers, a pear, etc. with a crucifix on top (from my seminary days).

My paintings have always played with external nature, that great cornucopia of allegory. Anthony Esolen informs us in his footnotes of his translation of Dante’s Inferno that “the universe itself is one great system of coruscating and interreflecting signs. It is not that, for example, believers found it convenient to compare the pelican to Christ, but that one of the reasons why God from all eternity created the pelican was precisely that it should be a sign of Christ.”[1]

When I see a pomegranate at the market, I see it as a visible sign of the resurrection of Christ; or a hive, the community of Christ. Gerard Manly Hopkins discovered more in nature’s grandeur, and with my wife’s help, so have I.

Alfonse Borysewicz (www.alfonseborysewicz.com) was born in Detroit, and engaged in seminary studies before attending the Museum School of Fine Arts in Boston. Borysewicz has received two Pollock-Krasner Foundation Fellowships (1987, 1992), a Guggenheim Painting Fellowship (1995) and has exhibited widely throughout the US, Europe and Japan.  He lives and works in Brooklyn, NY, and will be exhibiting at Judson Memorial Church (New York, New York) 8 October – 30 November 2014.