It’s 2018, and Star Wars: The Last Jedi has come and gone from theaters.

If, by some miracle of God, you have yet to discover the dark underbelly of internet journalism, new Star Wars movies are great paths to this underworld.

If you had spent the last year randomly googling Star Wars (I have done the deed for you; you’re welcome), you would find scraps of incredibly vague interviews broken up into seventeen articles (Mark Hamill Says There Is A New Ship!), followed by an article on the critics (they loved it!) and an article on the box office (should make money!), then an article on the fan reaction (wait… they don’t all like it!) and an alarming conclusion (is Star Wars still popular!?), followed by doubt of the fan reaction (it must have been the racists!) and thematic support (guys, it’s actually good), followed by more review of the fan reaction (maybe… it wasn’t the racists?), and finally some rational overview (well, the movie was pretty good and it still made money).  I’d love to see how much revenue a film like Star Wars: The Last Jedibrings into film sites like Collider and Ain’t It Cool News.

And yet, here I am, writing another article about Star Wars.  I do think, however, that any analysis of Star Wars should come with a few caveats. First, Star Wars movies are not based on a book or a board game or a TV show or a concept album or Hasbro action figures. They are, first and foremost, raw popcorn movies.

This claim is not to throw shade on its unbelievably likeable characters, vast worlds, effects, technical prowess, and glorious score.  And no matter how much I remind myself of its medium and limited reach, I can’t help but be deeply affected by these stories.But what this claim does mean is that Star Wars films are not about consistency or realism.  They are about big character moments and massive visual spectacle. Whatever it takes to get to those moments, Star Wars will employ.  In The Lord of the Rings, by contrast, if a group of travelers comes across an ancient cavern, it is because Tolkien mapped out that cavern, its people, and its culture thirty years before.  The characters go to the cavern because the cavern is in their way.  In Star Wars, ancient caverns exist because the story needed one.  Period.  (This is what makes conversations about consistency with the Force so ridiculous to me… once Yoda lifted an X-Wing with his mind, it seems like the Force was never thereafter appropriately utilized).

Second, no thematic analysis of Star Wars will ever be as important as understanding its function (and I am here liberally stealing from Charles Taylor).  Our modern culture generally allows for belief when you are a child but does not when you become an adult.  As a result, Star Wars movies serve most importantly as a link back to a time when people were allowed to have beliefs.  This is why the ‘Star Wars ruined my childhood’ sentiment is so strong when a new Star Wars movie is perceived as underwhelming or inconsistent. It didn’t ruin their childhood, it damaged their bridge back to their childhood and thus the bridge back to their world of belief.  I also think the reason we are in 2018 and still watching Star Wars has something to do with the need for the safely communal in a fragmented time (how many people have you heard saying ‘I’m so happy I get to take my kid to a Star Wars movie’?).  But that’s a conversation for another time. 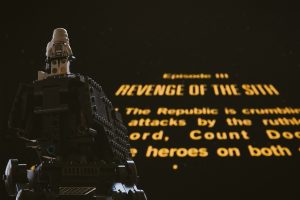 All of that being said, with Star Wars: The Last Jedi something interesting has happened with the themes of the Star Wars movies that is worth writing about.  A change that seems to appropriately fit the times and courageously moves the series in a direction away from the George Lucas-led films. Namely, Lucasfilm president Kathleen Kennedy and company have moved Star Wars from a ‘Messiah’ narrative to a ‘Follower’ narrative.

My childhood was spent enacting Luke’s adventures in the backyard, filling out the story after Return of the Jedi.  Luke would inevitably restore peace to the galaxy and bring around a new age of Jedi. I wasn’t the only one thinking this way, as the hundreds of novels about this time period would attest (particularly the Timothy Zahn trilogy).  The point is that there was never any doubt as to the final destiny of Luke.  He was the one who would make things right.

But The Last Jedi flips that script completely.  It has already accepted that Luke is not the messiah.  He tried to follow the storyline I played out as a kid, and it backfired.  As a result, he retreated and hid away in despair, simply waiting to die and allow the Jedi religion to die with him.  He looks back on his expectation that he could bring about a new Jedi order (and thus all my childhood Luke-fantasies) with disgust; to him, this expectation was a sign of pride (‘because I was a legend’).  It is a jarring and heartbreaking version of Luke to behold. Luke’s conflict in the new story is simple: will he train the new generation with hope?  Or will he simply give up?

The story is almost a direct retelling of Elijah’s story in 1 Kings 18-19.  Elijah believes that if God were to reveal himself in a powerful way, Israel would of course repent.  He gets what he wants in a classic showdown with the prophets of Baal.  God wins, the prophets are destroyed, and Elijah, the representative of God, stands triumphant.

Except, of course, Israel does not repent. Worse, they double their efforts to have him killed.  In raging disappointment, he disappears into the wilderness and asks if God will kill him. ‘It is enough; now, O Lord’, he says, ‘take away my life, for I am no better than my fathers’ (1 Kings 19:4).

This is a story that most Christians can probably relate to.  We all have our visions of societal renewal, God’s kingdom coming down convincingly and publicly with force, and us playing a pivotal role.

Only then, it doesn’t.  And, possibly, things even get worse.  We are left to face the question ‘is our faithfulness tied to an immediate result?’  Do we live out of hope when the results of that hope are invisible?

The conclusions to Luke and Elijah’s stories are remarkably similar.  An angel approaches Elijah, feeds him, and soon Elijah hears the voice of God reminding him that he is not alone, that 7,000 have not bent the knee to Baal, and that there is work still to be done.  Go find your successor and continue the march of daily faithfulness. For Luke, Yoda approaches him, reminds him that failure is part of life, and tells him that there is work still to be done.  Rey still needs guidance and protection.  And, as the last shot of the film reveals to us, there are more out there who have the Force and are ready to continue the fight.

I find this as compelling a switch of the narrative as the revelation inThe Empire Strikes Backthat Darth Vader is Luke’s father.  Each one was meant to bring these movies closer to home.  Yes, there is good and evil, but evil is often within our immediate family.  Evil often needs love and compassion as well as antagonism.  Yes, there is a glorious future but we rarely get to experience it. Our lives are spent fighting the local battle with hope, keeping our minds, as Yoda might say, on where we are and what we are doing.

And in this way, the Disney-owned Star Wars franchise is one that connects more directly with the often sluggish daily rhythms of faith. Kylo Ren is not a symbol in the way Vader is; he is evil in an embarrassingly childish way, somehow believing he can be truly original and stand apart from past leaders. Great men struggle when their vision is not realized and attempts to redeem the lost fail. Some may find this trend all too close to home.  It certainly makes the movies a little less escapist.  But the aforementioned pleasures of these movies still stand, and I suspect that when the new trilogy is finished, we will look back on Star Wars: The Last Jedi as the bravest film of the new run; one that assumed we need Luke more as a follower than we do as a leader.

Andrew Barber currently teaches English at The Stony Brook School on Long Island and has an MDiv from Covenant Theological Seminary. He has written film reviews and editorials for Christianity Today, The Gospel Coalition and RelevantMagazine.com, and you can follow him @flybarber14.

On 21 July of this year, Edinburgh based sculptor David Mach temporarily installed the first of four ‘Coat Hanger Crucifixions’ outside of St Giles…