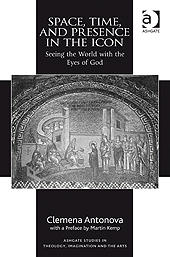 A Review of Space, Time, and Presence in the Icon: Seeing the World with the Eyes of God by Clemena Antonova (Farnham: Ashgate, 2010).

In an impressive display of depth of understanding, scholarly citation, and engagement with both fascinating and deep issues, Clemena Antonova’s book, Space, Time, and Presence in the Icon: Seeing the World with the Eyes of God, offers an in-depth study of Orthodox iconography and provides a compelling argument of how the artistic ‘technique’ of reverse perspective is a ‘text of theology’ and thus provides new understanding of Orthodox doctrine.  She also delves into philosophies of space and time and how one understands both within an icon.  While there is much in this book that would stimulate a specialist, this review will serve the generalist by briefly summarising Antonova’s work and finish by considering its contribution to the field of theology and the arts.

Antonova starts by considering the historical debate of the relation to space and time to art, specifically the visual and the literary.  Traditionally, it has been considered that visual art (a painting) exists in space while literature (ie poetry) exists in time (an argument put forward by Leonardo).  Antonova challenges this distinction and introduces ‘reverse perspective’, an artistic element that is an essential characteristic Orthodox iconography and something that (she thinks) has been misunderstood as the opposite of linear perspective (an impossible point of reference since reverse perspective existed before linear perspective).  While linear perspective involves parallel lines converging at a single point on a horizon, reverse perspective is ‘the simultaneous representation of different planes of the same image on the picture surface, regardless of whether the corresponding planes in the represented objects could be seen from a single viewpoint.’ (105)

In light of this artistic method, Antonova explores the theology of the icon, focusing specifically on how Orthodoxy understands presence within the icon, since ‘the Eastern Orthodox position on images is based on the belief that there is a sort of presence of the prototype in the image.’ (63) In a very dense and interesting section, Antonova discusses the Byzantine theology of the image, exploring the theological rationale put forward by the iconophiles and the corresponding criticism levied by the iconoclasts.  She then moves the discussion into the twentieth century with the work of Florensky, considering his view of the icon as symbol, arguing that his view is informed by both Byzantine theology as well as romantic notions of image and presence.  The image is a symbol – ‘something that manifests in itself that which is not itself, that which is greater than itself…’ (96).  The image as a symbol has the capacity to be a container for presence, and in the case of the icon, that presence is partial.  This view of the image challenges some of the underlying assumptions about art, initially laid by Kantian aesthetics.  Antonova suggests that because presence results in a dynamism between object and viewer, Kant’s ‘disinterested’ aesthetics is inadequate and does not ‘describe adequately what happens in the interaction between image and viewer in a religious context.’ (101)

Antonova finishes with what I think is the most relevant for readers of this blog by linking her research into the wider theology and the arts discipline and considering whether ‘reverse perspective’ could be reflective of theological doctrine, as seen through both Orthodox liturgy and the visual arts.  If one applies an understanding of ‘reverse perspective’ to liturgy, a different understanding of the Orthodox’s use of the present tense in describing past events becomes possible.  Rather than just pointing to a hope in the future, it challenges one’s understanding of the present and seeing time as a linear construct.  For example, rather than seeing Christ’s death as a ‘once and for all’ event (as linear time does), ‘reverse perspective’ introduces an ongoing sense of that event in the present.  (132-3)  With the visual arts, Antonova suggests that its implementation as an artistic device ‘could actively contribute to the understanding of the theological doctrine of timeless eternity’ (137) and provide ‘a visual code to the nature of a simultaneously existing, timeless deity.’ (142) This way of ‘seeing’ points to ‘“the way God sees the world”…a simultaneously existing god, who is outside space…and time…would perceive the various aspects of objects all at once.’ (153) 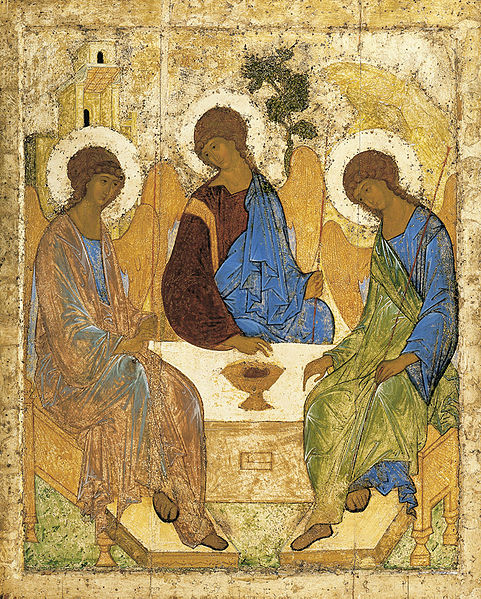 As someone who knows the basic constructs of Orthodox iconography and the theology that underpins it but wholly unfamiliar with ‘reverse perspective’ and the subsequent issues it raises, I found Antonova’s analysis of Rublev’s Trinity icon to be extremely helpful in understanding her argument and its significance.  Rublev’s Trinity Icon feature three angels and alludes to the visitation of the angels to Abraham and Sarah in Genesis 18.  The three angels are commonly interpreted as representing the Trinity.  Much has been written about how to interpret this icon, specifically which angel represents which part of the Trinity.  Antonova finds this direction of thinking to be missing the point of what Rublev intended (and what his audience would have understood).  Within the framework of her argument, Antonova views the three figures as ‘one figure seen simultaneously from different points of view,’ engaging with the paradox of the three yet one nature of the Trinity in an interesting way.

As I mentioned at the beginning, this book will delight the specialist and challenge the generalist but regardless will open up any entirely new way of thinking for any reader.  Engagement with the material could have been made easier by the publisher as the type was too small and the single spacing made it hard to read, especially for someone not familiar with the concepts in the book.  Regardless, I think Antonova has challenged the temptation to engage with Orthodox iconography with Western artistic eyes and reveals that depth of theological meaning also lies in the artistic method employed in the creation of the icon.

Sara Schumacher is the editor and a regular contributor to Transpositions. Prior to life in academia, Sara worked as a graphic designer in Oxford where her experience as an artist and a Christian raised many questions, ultimately leading her to pursue further study in theology and the arts at St Andrews. Sara holds a B.S. in Graphic Design and an A.A. in Cross-Cultural Services from John Brown University and has recently completed an M.Litt in Theology, Imagination, and the Arts at St Andrews. She is currently working on a PhD at St Andrews, focusing on church patronage of the arts.

“The taste for the useful predominates over the love of the beautiful in the heart of man,”  writes Alexis de Tocqueville  at the opening…