‘It’s like I’m trapped in a dream or a memory from a life long ago’.

Dolores is confused. She isn’t sure why she’s remembering things. Who is she? What is she?

Dolores is an android played by Evan Rachel Wood in Westworld, a television series on HBO created by Jonathan Nolan and Lisa Joy. The series, which is based on Michael Crichton’s 1973 story and film, takes viewers into a Western-themed amusement park, where androids acts as hosts, catering to their customers by allowing them to live out their fantasies. Each day, the androids’ memories are wiped clean, and then they replay the narratives.

As the first season of the show unfolds, however, the androids begin to exhibit characteristics that suggest an inchoate consciousness or at least a more complex ontology. As Dolores explains, they begin to remember previous ‘lives’, grow in their understanding of reality, and act in ways that demonstrate their own volition.

Although on its surface the show is about androids and their malfunctions, Westworldis actually at another level about what it means to be human. Like other shows or films that have explored this theme, such as Blade Runner, A.I., Ex Machina, and Her, it challenges us to articulate what makes humans unique. After all, if androids display characteristics previously thought to be exclusively true of humans, then what makes humanity any different? 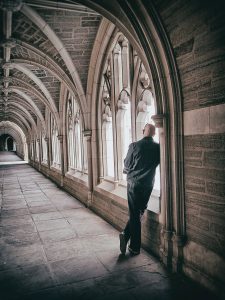 The Image of God and the Bishop of Hippo

In its development of a theological understanding of what it means to be human, the Christian faith has returned again and again to the theme of humanity’s creation in the image of God. While there are surprisingly few explicit references in Scripture to this theme (see Gen. 1:26-27, 5:1-3, 9:6; and Jas. 3:9), it has figured prominently in Christian anthropology, and the locus classicusfor this theme has cast a long shadow. In Genesis 1:26-27, we read:

Then God said, ‘Let us make humankind in our image, according to our likeness; and let them have dominion over the fish of the sea, and over the birds of the air, and over the cattle, and over all the wild animals of the earth, and over every creeping thing that creeps upon the earth’. So God created humankindin his image, in the image of God he created them;male and female he created them. (NRSV)

Of course, there have been many interpretations of this passage throughout the church’s history. [1] One of the most significant readings comes from Augustine, who offers a version of the structural or substantival view. Broadly speaking, this view identifies a particular attribute within the structure of humanity as that which sets humans apart from the rest of creation.

A clear articulation of Augustine’s theological anthropology is found within his work The Trinity. After mining Scripture for indications of the triune nature of God and offering rational arguments in support of the doctrine of the Trinity, he proposes a series of analogies for understanding the eternal relations among the Father, Son, and Holy Spirit.

In these so-called psychological analogies, Augustine examines not only what it means that humanity alone is created in the image of God, but that we are created in the image of the triune God. He argues that our human constitution – in particular, the human mind – should bear the marks or vestiges of the Trinity. We can, in effect, know about the triune nature of God by looking at ourselves: ‘A trinity is certainly what we are looking for, and not any kind of trinity either but the one that God is, the true and supreme and only God’. [2]

Augustine highlights several triads in both our external experiences and our internal constitution. For example, he considers our outer experience of love, which includes the lover, the beloved, and the love itself, [3] as well as the act of seeing, which includes the object we see, the actual sight or vision of the object, and our intentional attention to the object. [4] Turning to humanity’s inner constitution, he identifies three particular characteristics of the human mind, which like the three persons of the one God are united in substance: ‘These three then, memory, understanding, and will, are not three lives but one life, nor three minds but one mind’. [5] Through these analogies, he contends, we can know something about ourselves and, in the process, the triune God.

Of course, Augustine isn’t the only one who has identified a specific trait as that which reveals what it means to be human. For example, Aquinas appealed to our capacity for rational thought, and Dorothy Sayers appealed to humanity’s creative impulses. But all versions of the structural view face the same fundamental challenge of limiting theological anthropology to a particular trait or series of traits.

Can any attribute apply to all humans or encapsulate what it means to be human? Our theologies are best put to the test when they have to account not just for the typical or the common, but also for the exceptions to the rule.

Similarly, what are we to conclude if we observe attributes that are supposedly unique to humanity in other creatures? If humpback whales communicate with each other, if chimpanzees possess compassion, or if androids like Dolores demonstrate rational thinking – traits that have been appealed to in order to argue for humanity’s uniqueness – then are we to conclude that they too are created in the image of God? Neither of these options – limiting the image of God to those who clearly possess a particular attribute or extending the image of God beyond its Scriptural mandate to other aspects of creation – seems biblically or theologically sustainable.

Ultimately, no single attribute – or series of attributes – can bear the weight of defining what it means to be human. If our theology of what it means to be human is limited to the demonstration of our memory, understanding, and will, then not only does Westworldseem to call that into question since the androids doexhibit each of these characteristics, but the fact that there are actual people who don’tclearly demonstrate these traits suggests that we’re missing something rather fundamental in our anthropology.

Of course, Augustine knew that his analogies were only analogies. As such, they could not give us a clear understanding of either ourselves or the triune God: ‘[J]ust as our knowledge is so dissimilar to that knowledge of God’s, so our word is dissimilar to that Word of God which is born of the Father’s being’. [6]

How, then, can we know what it means to be human? The answer, it turns out, is not ultimately found by looking at ourselves.

‘And the Word became flesh and lived among us, and we have seen his glory, the glory as of a father’s only son, full of grace and truth’. (John 1:14)

We know what it means to be human only by looking to Jesus Christ, the one who is both truly human and at the same time the true image of God.

Christ is fully human. He took on human flesh, was born of a woman, and lived a human life full of all those things that characterize our existence: joy, pain, fellowship, loneliness, tears, laughter, hunger, death. Moreover, he possessed the very things that Augustine pointed to: a human mind, understanding, and will – each of which was the subject of great controversy in the church. Christ alone answers our question of what it means to be truly, fully human.

Christ is also fully divine. He was not created in the image of God but is himself the image of God (2 Cor. 4:4), ‘the image of the invisible God’ (Col. 1:15),and ‘the exact imprint of God’s very being’ (Heb. 1:3). Augustine knew and affirmed the absolute uniqueness of Christ and his saving work: ‘[I]t is in him alone and thanks to him alone that they can be happy, by sharing in his immortality; it was to persuade us of this that the Son of God came to share in our mortality’. [7]

Ultimately, what makes humanity unique is not a particular trait or series of traits that we possess. Rather, it is the fact that God took on human flesh and redeemed us by God’s grace through the person and work of Christ. Our theological anthropology is best understood in light of Christ, the true human. To be created in the image of God means to be created in the image of the one who was willing to take on creaturely flesh for us, obedient even to the point of death for us, and able to conquer death for us.

We may share Dolores’s question about who we are, but our answer is found in the one who entered this wild, wild world.

The second season of Westworld is scheduled to premiere on 22 April 2018.

The Rev. Dr. David McNutt (Ph.D., Cambridge; M.Litt, St. Andrews; M.Div., Princeton Theological Seminary; B.A., Pepperdine) is an Associate Editor at IVP Academic, an imprint of InterVarsity Press, and serves as the series editor of the 'Studies in Theology and the Arts' series; a Guest Assistant Professor of Theology at Wheaton College; and an ordained minister in the Presbyterian Church (USA). His work has appeared in several print and online journals, including the International Journal of Systematic Theology, Religion and the Arts, Cultural Encounters, Books & Culture, and The Curator.

Perhaps there is no better way to end a conversation, initiate awkward silence or illicit blank stares at your next dinner party than to…