On a cold, bright day in November, I stepped into the Senate Room at the University of St Andrews to participate in my first ever symposium. A dozen or so august academics gazed down upon the room from antique portraits. Less foreboding were the friendly faces of our six visiting composers, many of whom had arrived in St Andrews for the first time the night before (or, in some cases, that very morning). Also gathering were six PhD candidates from the School of Divinity, of which I was one. Katy Wehr, one of the key organisers of the event, beckoned me over to the loose circle of composers and introduced me to my partner for the next few months, Kerensa Briggs.

And so the TheoArtistry partnerships began. Each partnership comprises one theologian and one composer, working together to set a scriptural text to music. The chosen biblical passages are all from the Hebrew Bible, and are all characterised by the theme of ‘annunciations’—God speaking to humanity. By the end of the project, the partnerships will produce six theologically-informed compositions to be performed by St Salvator’s Chapel Choir in 2017.

Meeting at the symposium was my opportunity to communicate my theological research to Kerensa. Our passage? The famous ‘burning bush’ incident of Exodus 3.

For both of us, our interest in the text was piqued by the presence of fire. What might the burning bush indicate about this divine-human encounter? And how could a composer represent the bush itself in music?

Below are two perspectives on this project from the angles of theologian and composer. The composition is still very much a work in progress (as Kerensa would attest). However, much of the theological and artistic thinking that underpins the composition has already been done. Our ideas are now in the process of being explored musically by Kerensa as the piece comes together. The ‘theologian’s reflection’ focuses on the theoretical foundation that informs the composition, while the ‘composer’s reflection’ speaks of the composition as it exists presently — that is, as a work of art that is coming into being.

Working on the ‘theologian’ side of the partnership, my role is comparatively simple: provide the background, the context, and the themes of Exodus 3. My research has been a kind of exploratory venture, designed to open up possibilities for the composer rather than provide conclusions. It is my task to convey the theological depth of the scene: the significance of Moses’ calling for the covenant; the nuances of divine appearance and of the divine names; and the symbolic resonances of the burning bush itself. 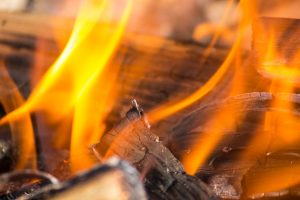 For the month leading up to the symposium, I spent a lot of time thinking about fire. This is not unusual for me — my PhD thesis focuses on the multivalence of fire, so I spend much of my day considering various theological and symbolic resonances present in fire imagery. However, October’s fiery musings were particularly focused and intense. I had roughly four weeks to attempt to unravel the idea of a fire that does not burn.

It sounds like a philosophical dilemma. It is certainly a theological one.

I had written before on the theological dimensions of the burning bush in Exodus, but I had approached the image in a primarily visual way. I had done so, as it were, with my mind’s eye wide open. I had imagined the sight of the flames catching Moses’ attention; Moses drawing closer as he saw that the branches of the bush were not charred, quickly followed by his realisation that the bush itself was not burning up. I had envisioned him standing before the bush, gazing into the flames as the angel of the Lord called his name: Moses. Moses.

The TheoArtistry compositions will not be accompanied by any extra visuals, leaving only the music. There is no scope to represent the bush in images or to describe it in prose. In preparing my research for my composer, I wrestled with an intriguing dilemma: how could I present the image of the burning bush in a way that would lend itself to music? This approach to the image led to a different kind of imaginative engagement. I found that I needed to close my mind’s eye. Instead of asking what Moses saw, I needed to ask: what might Moses have heard?

This first, fundamental question led to half a dozen more. Would the flames have had rhythm? Did they flare and recede or stay constant? Can flames even make sound if the wood is not actually being burned? (It turns out the answer is yes — by virtue of air displacement.) What if the flames did burn silently? How might sound, or the absence of sound, affect how Moses felt upon seeing the unburned bush? What in the sound of the flames might resemble the sound of the divine voice?

Since our first meeting at the symposium, Kerensa has taken these questions about fire—and many others about identity, revelation, and the divine voice—and started the process of composition.

I was immediately drawn to Exodus 3 due to its evocative imagery and expressive implications. I thought it would be interesting to delve further into the context of the passage and to see how the ideas surrounding it could be translated musically.

I interpreted the notion of the burning bush as a continuous flame of revelation as opposed to a “one off” explosive moment. There is initially a sense of mystery and ambiguity as to who, or what presence, is speaking from the bush—the identity of God is revealed as the text continues. There are also questions surrounding Moses’ identity. These elements are some of the things I have tried to express within the music. 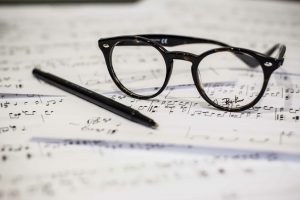 The opening rhythmic quaver pattern in the organ part is depicting the continuous, rhythmic yet slightly mysterious nature of the burning flame, as a background to the voice(s) that are soon to enter. When Moses is told that he is on ‘holy ground’, there is a harmonic shift to F# major as it becomes clear to him that he is in the presence of God. God’s words are now proclaimed in a solo voice, ‘I am the God of thy father, the God of Abraham and the God of Isaac and the God of Jacob.’

The fire depicted in the organ, and sometimes imitated or responded to in the voice parts, is an ever-changing presence that acts as both a support and a stimulus for the voices; the divine voice is, in a sense, interwoven within both.

Of course, Exodus 3 is about much more than the bush that does not burn. It is about covenant, an encounter between human and divine which reaches far into Moses’ past and even further into our future. However, the burning bush is too central to the theology and aesthetic impression of the passage to be neglected out of sheer inconvenience. True, it would have been far easier not to undertake the imaginative work that was needed to set the burning bush to music. Easier, but nowhere near as rewarding.

The portrayal of fire has not been the only challenge to arise from setting Exodus 3 to music, but it has proven the most characterful. For both theologian and composer, the imaginative possibilities of fire have guided how we have thought about and discussed the project.

Our shared determination to incorporate some aural representation of fire has deepened our engagement with the passage. It has added texture to both the music and the theology.

On that cold, bright day of November’s TheoArtistry symposium, sixteen pages of research around Exodus 3 seemed to present a thousand artistic possibilities. How could we possibly whittle down our myriad shared ideas into a single artistic expression of the text? But that is precisely what followed.

Music and the musical imagination have given structure to over-abundant possibilities. Now, the project is in its productive phase as Kerensa weaves the theology of the passage into music. Setting the scriptural text to music is no mere act of embellishment. Artistic choices regarding what the composition conveys—and how—are themselves an act of theology.

For more about the project, check out www.theoartistry.org