One of the more familiar stories from the Hebrew Bible comes from the ‘Call of Isaiah’ in Isaiah 6. The lines ‘Woe is me!’, ‘Here I am, send me!’ and the Trisagion, ‘Holy, Holy, Holy is Yhwh of Armies’, are all well-trodden texts by both scholar and pulpit alike.

Yet, the Isaianic text certainly commands attention for other reasons. The fantastic creatures known as the seraphs (Heb. seraphim) have captured the imagination of artists for the better part of the last two thousand years. Numerous Byzantine examples might be most familiar to modern people, wherein the seraph covers nearly all its body with its wings, exposing only its head, feet and hands. These early Christian renditions are no doubt works of art, but the historian in me wonders: Do the Byzantine, or any other post-biblical visual interpretations of the seraphs, reflect what Isaiah saw? In other words, are there visual correlates for the seraphs that would have been known to an eighth-century BCE Judahite like Isaiah?

I shall attempt to answer the above question in two complementary ways. First, via critical analysis of linguistic evidence from the Hebrew Bible, options emerge for how to understand the seraphs. Second, using the conclusions drawn from said linguistic analysis, I shall highlight a set of iconographic data from a period and locus approximately contemporary with Isaiah. Based on the cumulative evidence from these two data sets, I think we can safely isolate what the seraphs would have ‘looked like’. So, without further delay, let us mine the Hebrew Bible for linguistic clues regarding the seraphs of Isaiah 6.

For some time, scholars have sought to explicate the nature of the seraphs via analysis of the Hebrew noun seraphim as well as with reference to the surrounding pericope of Is 6.2-6. When it comes to Isaiah’s description of the seraphs, it is surprising how sparse the description is. Following the text, the seraphs have six wings, faces, hands and ‘feet’—which is probably a euphemism (cf. Ruth 3.7) (v. 2, 6). They also speak (v. 3) and fly (v. 6). However, beyond such generalities nothing more is said. Funnily enough, this textual scarcity is perhaps why the Byzantine seraphs are more ‘wing’ than anything else. The artists incorporated everything the text provided, which clearly isn’t much.

Thankfully, the term seraphim proves more useful for identifying the appearance of the beings. In fact, there are two possible ways to understand the name. The first option is to understand seraphim as primarily based on its verbal sense, which means ‘to burn’. If the term seraphim is understood in the sense of ‘to burn’, it follows that the creatures are ‘the ones that burn’. But we might ask: What does it mean that the creatures are ‘burning’? Are they luminous beings? If so, why has the writer chosen the verb ‘to burn’ instead of verbs that explicitly refer to luminosity (e.g., *ypʿ Duet 33.2; Ps 50.2; 80.2 [Eng v.1])? Moreover, it is less obvious how ‘burning’ informs what the creatures looked like. Surely there is more to the seraphs than a general sense of ‘burning’, which leads to the second translation option.

The noun saraph (the singular form of seraphim) can also connote ‘snake’ or refer to snakes via metonymy. Without delving into an in-depth lexical study of the term, let us consider a single example that demonstrates the point. In Numbers 21.6-9, the people of Israel, no longer under the auspices of Egyptian rule, fear death by starvation and thirst during their adventure in the wilderness. The text explains that the people speak out against Moses and Yhwh out of frustration (Num 21.5). In response to the Israelite behaviour, Yhwh sends saraph-snakes into the Israelite camp, whereupon some of the Israelites are bitten and die (v. 6). The people come to Moses, repent of their grumbling and ask Moses to calm Yhwh on their behalf in order to assuage the situation (v. 7). Moses agrees and prays for the people. Yhwh then instructs Moses to make a saraph and place it on a pole, so that anyone who looks at it will not die (v. 8). Moses follows Yhwh’s instructions and constructs a bronze snake (nachash hanechoshet) which he sets on a pole, thereby ending the episode (v. 9).

The significance of Numbers 21 is the seemingly coterminous relationship between saraph and nachash. Clearly Yhwh’s instructions in v. 8 require Moses to build a snake, as is confirmed in v. 9; yet, the term Yhwh uses is saraph (as a noun), not nachash (‘snake’). So whilst the verbal form of saraph means ‘to burn’, as discussed above, it is not obvious that the verbal sense is primary in v. 8. On the contrary, saraph appears to be a synonym for nachash and in some way designates ‘snake’.

To account for the use of saraph here, some have rightfully argued that the term signifies the effect of the snake’s bite, which induces a burning sensation. There are two possible snakes that fit this profile in the Levantine fauna: the black-necked cobra and the red spitting cobra. [1] Such an observation nicely accounts for the use of saraph in v. 6, where Yhwh sends saraph-snakes, i.e., ‘the snakes that cause a burning sensation’. So in v. 8, when Yhwh instructs Moses to build a saraph, the term metonymically refers to a particular kind of snake. A similar linguistic phenomenon occurs in English when we colloquially speak of ‘rattlesnakes’ as ‘rattlers’. Therefore, saraph in Numbers 21.6-9 functions as a term that signifies ‘snake’. So in the cases of texts like Isaiah 14.29 and 30.6, the saraph meopheph is best understood as ‘flying snakes’.

Regarding Isaiah 6, then, the linguistic data elicits a probable identification. The noun seraphim is best understood as meaning ‘snakes’ or at the very least connoting ‘snakes’, as in Numbers 21.6-9. Plausibly, a strict linguistic analysis suggests that the seraphs of Isaiah’s vision are avian serpentine creatures with faces, hands and ‘feet’. With such a conclusion, let us turn to the iconographic record to test the hypothesis.

Helpfully, outside the Hebrew Bible, winged snakes are attested across various regions and periods of the ancient Near East. Appearing in Egypt as early as the fourth millennium BCE, serpentine traditions permeate both the textual and iconographic records. For instance, the wingless form of the serpent, often in the form of the Egyptian cobra (Naja haje), is closely associated with the goddess Wadjet—the divine midwife. Frequently called the uraeus (Gr. ouraious) in scholarly circles, the Egyptian cobra is generally a protective agent or apotropaic figure in Egyptian lore. Such a protective function is exemplified in texts like the Prophecy of Nefer-Rohu, where the uraeus guards the king from treacherous tempters. [2] Also, the uraeus’s presence on pharaonic headgear and other royal garb is suggestive of its protective function.

Additionally, there are also Egyptian examples of the winged form of the uraeus. Wings, not only in Egypt, but also in the Hebrew Bible, tend to signify the notion of protection (see Ps 91). Therefore, the addition of wings to the uraeus further highlights the protective function of the creature. In terms of iconography, winged uraei appear on the throne of Tutankhamun (late fourteenth-century BCE), which displays two, two-winged uraei, one either side of the chair. [3] And the sarcophagus of Sety I (early thirteenth-century BCE) displays a two-winged uraeus and a four-winged uraeus (Fig. 1). 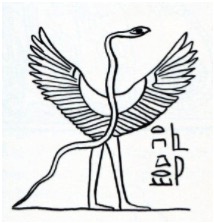 Othmar Keel has helpfully highlighted two Egyptian examples that bear striking resemblance to the Isaianic seraphs. First, a two-winged uraeus bearing legs and feet appears in the Book of the Dead (Fig. 2). [4] Second, the tomb of Ramesses VI displays a company of humanoid uraei using their hands to pull the solar barque (Fig. 3). Though it is unlikely that the author of Isaiah 6 knew or drew upon these specific examples, the amalgamation of anthropomorphic and zoological features is telling.

As in Egypt, four-winged uraei are also found in Israel and Judah. One seal displays a four- winged uraeus, possibly adorned with the goddess Hathor’s horned solar disc. [10] Another Judahite seal contains a four-winged uraeus, but this time wearing the Egyptian double crown. [11] On top of the previous two seals, the serpentine motif appears on several other Judahite seals (Figs. 5-7). [12] As these examples indicate—not to mention the countless others that are collecting dust in museums around the world—the Egyptian winged uraeus was a favoured artistic motif in Isaiah’s very backyard. 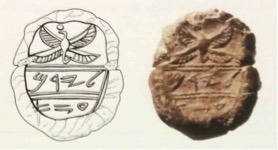 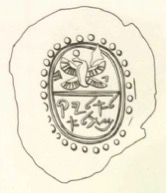 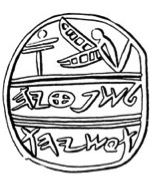 Also as in Egypt, the protective power of the winged uraeus is signified through two conventions of display. One convention displays the creature in profile as it extends both wings in one direction, as on a seal from Lachish where the uraeus guards a stylised ankh, the Egyptian sign for ‘life’. [13] Protection is alternatively signified when the uraeus is depicted en facie and hovers ‘over’ the name of the seal’s owner (Figs. 8-10). [14] Given these artistic conventions, it is clear that the protective function of the uraeus carried over from Egypt and into Israel and Judah, where it became a common iconographic element.

So, how might we answer the question posed at the beginning of this discussion? Based on the cumulative evidence, the seraphs in Isaiah 6 are textual versions of the winged uraeus. With that said, several other observations logically follow. First, this means that Isaiah’s creatures are deeply rooted in an Egyptian artistic tradition. Said tradition migrated to the Levant and maintained a popular status in the iconographic repertoire for several centuries. Second, as in Egypt, so too in Israel do the seraphs function as protective agents. However, in Isaiah 6 the role of the creatures flips. Instead of protecting someone or something else, the seraphs guard themselves from Yhwh. Lastly, observing the popularity of the celestial being in Israel and Judah, the winged uraeus must have appeared as a likely, if not logical member of Yhwh’s already populated pantheon. Ostensibly, to introduce an additional being was just another drop in the bucket for the author of Isaiah 6.

Taylor Gray is currently a PhD candidate at the University of St Andrews studying under Dr. Madhavi Nevader. His present research investigates petramorphic language in the Hebrew Bible and ancient Semitic standing stone traditions through the lens of Peircean semiotics. In 2016, he completed an MLitt in Biblical Languages and Literature at the same university. During that time, he worked on Iron Age Levantine iconography and the seraphim in Isaiah 6.

Due to circumstances outside our control, Josh Edelman’s post has been moved to Saturday. Today, please enjoy Part One of Wes Vander Lugt’s A Thesis…