“The first stage of the economy’s domination of social life brought about an evident degradation of being into having – human fulfillment was no longer equated with what one was, but with what one possessed.  The present stage, in which social life has become completely dominated by the accumulated productions of the economy, is bringing about a general shift from having to appearing…  At the same time all individual reality has become social, in the sense that it is shaped by social forces and is directly dependent on them.” [1] 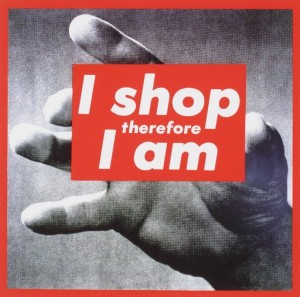 Barbara Kruger, Untitled (I shop therefore I am), 1987

In his seminar on The Four Fundamental Concepts of Psycho-Analysis, Jacques Lacan exposits a conception of the social unconscious which recognized that a person’s identity is socially constructed within the context of their community.[2] For Lacan, the process of self-definition is not an autonomous enterprise.  Instead, identity is intersubjective; subject to the pressures and beliefs of the broader community, and these corporate and implicit influences can be understood to comprise the “social unconscious.”  It is “social” because it is determined through societal interaction, and it is “unconscious” because it is so pervasive that it often manifests its will through the members of a given community undetected.

As consumers in an increasingly commodified culture, the will of the social unconscious is often manifested in the marketplace. As Naomi Klein explained in her seminal book, No Logo, contemporary advertising is primarily concerned with developing and disseminating the meanings of brands. These meanings often aspire to be spiritual. [3] When advertising is successful, these commercial narratives become part of the social unconscious and come to bear on decisions we may think are autonomous. For example, when I purchased the Apple iPad I am using to compose this post, I did so based on a combination of thoughts and feelings that Apple wanted me to associate their product. In so doing, I essentially acquiesced to the will of the social unconscious insofar as Apple’s desire for me as a consumer preceded my desire for the iPad as a product. This begs the question – who is consuming whom?

Few artists have been more adept at illuminating the social unconscious of contemporary consumer culture than Barbara Kruger. In her photographic silkscreen, Untitled (I shop therefore I am), Kruger deftly employs her trademark appropriation of commercial forms to subvert and expose the presuppositions implicit in consumer society regarding assertions of identity.  By reframing the Cartesian dictum, “I think, therefore I am,” Kruger confronts us with the unsettling proposition that in today’s marketplace, even identity can be reduced to a commodity to be bought, sold, exchanged and upgraded – or at least it appears we believe that it can.

In light of these considerations, I’ve decided to review my credit card statements in order to construct a consumerist autobiography based on the meanings I’ve associated with the brands and products I’ve purchased over the last ten years.  It begins like this:

My name is Christopher.  In undergrad I was a PC…

Christopher Min has a background in arts administration and entertainment, most recently serving as a segment and live events producer for MTV Networks.  He is currently pursuing a degree in Theology and the Arts at Fuller Theological Seminary in Southern California.

Christopher Min has a background in arts administration and entertainment, most recently serving as a segment and live events producer for MTV Networks. He is currently pursuing a degree in Theology and the Arts at Fuller Theological Seminary in Southern California.

James McCullough is a PhD student at the University of St Andrews.  His research explores the relationship between works of visual art and spiritual…