The poem is titled ‘Romsey Christus‘ (after the sculpture by Peter Eugene Ball) and it represents an internal and ongoing, four-way conversation/argument between faith, art, reason, and religion that has been roiling since early adolescence. Once I began writing poems in high school, the conversation found a voice, but the appeals of reason and art held sway; I was persuaded to keep faith and religion effectively out of my art. During an MFA at Vermont College of Fine Arts, my advisors challenged me to begin letting all the concerns have a place in any poem that opened toward such inclusion. The Incarnation is the once-in-time, revelatory sacrament of ‘God with us’ against which to measure any and all other claims to divinity or heavenly direction. But if no Resurrection, then no such revelatory sacrament. The divine Logos both broke in and broke out of our Old Order history, and now leads captive a host of captives into the New Order freedom and fullness of God.

You can read more about the process behind this piece here. 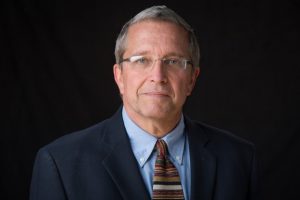 Brad Davis has had seven collections of poems published, most recently Opening King David (poems in conversation with the Psalms) and Still Working It Out. His awards include an AWP Intro Journal Award and the Sunken Garden Poetry Prize for his chapbook, Short List of Wonders. Davis’s poems have appeared in many journals (e.g., Poetry, Paris Review, Image, JAMA, Puerto del Sol, Spiritus, Practical Theology), and he was a featured reader in Yale’s Literature and Spirituality Series. His new collection, in which ‘Romsey Christus‘ will appear, is Trespassing on the Mount of Olives (poems in conversation with the Gospels).