If the deep purpose of creaturely reality is to make manifest the glory of God, then the ‘place-writing’ of Robert Macfarlane may be said to register whole constellations and caverns of glory to which we are customarily oblivious— ‘continents within countries’ – the sacral language of the wild places.

Fellow of Emmanuel College, Cambridge and the Royal Society of Literature, Robert Macfarlane pioneers a form of ‘place-writing’ centred on mind and landscape, pilgrimage and wayfaring, that traces its antecedents to the work of John Muir and Edward Thomas, Nan Shepherd and Roger Deakin. Could his project help facilitate the type of ‘ecological conversion’ Pope Francis identifies in Laudato si’ as crucial to the earth’s future? How might his explorations in ‘ecological aesthetics’ contribute to what Lewis terms the ‘baptism of the imagination’, i.e., the re-visioning of the world in Christ?

A luminous virtue of Macfarlane’s craft as a poetic-non-fiction writer is the fineness of perception which marks his recollected commerce with the natural world. This is evident in his intricate evocations of the Himalayan uplands, the contested edgelands of the Middle-East, the coastlands of the Outer Hebrides, or most recently, the ‘underlands’ of Neolithic caves. 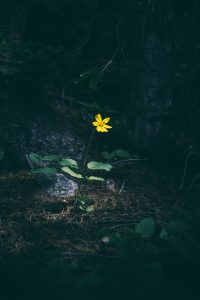 The initial chapter of Landmarks, the second entry in his trilogy on landscape, is instructively entitled ‘a counter-desecration phrasebook’. What follows are nine place glossaries comprising thousands of words from myriad dialects that capture the wondrous subtleties of nature, weather and terrain in the British Isles. One term, for instance, ‘caochan’, designates a ‘slender moor-stream obscured by vegetation such that it is virtually hidden from sight’. The Cornish word ‘zawn’ denotes ‘a wave smashed chasm in a sea cliff’, and the mellifluous ‘rionnach maoim’ means the ‘shadows cast on the moorland by clouds moving across the sky on a bright and windy day’. Such beautiful words Macfarlane regards as ‘tiny landscape poems’ [1]. For the faithful perceiver, they are unavoidably the words of the Word.

Macfarlane’s evident preoccupation with specificity is deeply, although unwittingly, consonant with the vindication of the particular demonstrated in the Word of God’s becoming flesh (his formation in the womb, traversal of the desert, baptism in the sea, prostration in the garden, execution on the hill and communion on the shore). Too often the grandeur of nature is spoken of in the abstract, in sentimental or nostalgic modes. And this rarely with concentrated attention to the inner vibrancies, interlocking milieus and historical courses of living creatures. Negligence in this case is a sobering index of our apathy toward the created order. Macfarlane’s remarkable quest to ‘register the participatory dramas of our relations with nature and landscape’ may be interpreted as a deepening of the Adamic task of naming portions of the living world (Gen. 2:20) [2].

Another virtue of his prose is the confluence of reference and figuration, analysis and metaphor. In Mountains of the Mind we are guided through the ascents and traversals of vast mountain systems with interludes of glacial science, world literature, analytic philosophy, apocalyptic discourse, geology and mysticism [3]. It is the ardent intention of Macfarlane that ‘the denotive and the figurative are paired as accomplices rather than antagonists’ [4]. In this hybrid genre, we discover perceptions of playfulness, inter-dependency, beauty and intelligibility tuned to the glory of creation—its mysterious intimation of and providential upholding by God. Just as faith in Christ begins in fascination and blossoms into commitment, so might our ecological engagement be spurred by wonder and appreciation.

But far from offering an Edenic optic that filters out mass degradation and ecological crisis, Macfarlane renders the incursions and hollows of the natural order with haunting clarity and with definite moral purpose. The themes of ‘disease’, ‘exile’ and ‘unsettlement’ are cautionary, serving as an aesthetic appeal to adapt our habits [5]. 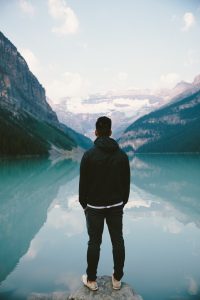 For Macfarlane, the erasure of place words from our vernaculars indicates the loss of particularised ways of seeing. This loss is borne out in diverse and deleterious ways. We are dislocated from the weathers, terrains and textures of the spaces and times we daily negotiate. We thereby lose a rich provision of metaphors and lexical figures for making sense of our particular journeys, sociality and interior lives – a feature vividly evidenced in the nature-saturated language of the biblical traditions and Celtic and Desert spirituality. In Macfarlane’s words, we lose the aid of landscape and inscape to ‘figure ourselves to ourselves’ [6].

Instead, our perceptions and thoughts are increasingly modulated by technical and virtual vocabularies. Our common languages are bending towards utilitarian concerns and away from appreciation, celebration and mystery. The presence of wilderness in our midst that once served as an invitation to humility and gratitude is reduced in significance to raw material, instrumentality or even meaninglessness. We have long departed from the richly textured worlds inhabited by ‘crofters, fishermen, farmers, sailors, miners, climbers, soldiers, shepherds, poets, walkers [and] children’ [7].

The more we are deprived of language which senses the eerie strangeness and consoling intimacy of creature and place, the more we are distanced from the materiality and finitude of our own condition. The corrosion of ‘scalpel sharp words’ from our lexical pools thus underlines an oddly gnostic tendency [8].

Internal to the genre of writing is a revision of the borders and affinities of the flesh, revealing at once the clear limitations, dependencies and responsibilities of human life.

Finally, Macfarlane’s concern to ‘re-wild’ language is rooted in a desire to know and to delight in the gift of creation in all its teeming diversity and interior richness. His mission is to reclaim the lost intricacies of perception stored in forgotten or marginal words and to birth new ‘fine-grained’ vocabularies of place. He writes, ‘Words act as compass; place-speech serves literally to en-chant the land—to sing it back into being, and to sing one’s being back into it’ [9]. These are gestures of and invitations to love. While apparently humble in scope, this is one potent means to mend the fractures endemic to technocratic modernity: to allow fascination and gratitude to draw together mind and world, intellect and imagination, individual and community, the human and the non-human, and finally the enigmatic world we move in and the creative love of the Triune God.