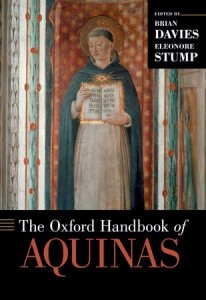 In this Handbook, the editors “have tried to pick those issues and topics that allow the reader to see Aquinas’s whole worldview in broad outline and to appropriate in particular some of its richest and most powerful parts.”[p. 9] The Handbook includes thirty-eight chapters grouped into seven post-Introduction parts: 1) Historical Background, 2) Metaphysics and the Existence of God, 3) The Divine Nature, 4) Ethics and Action Theory, 5) Epistemology and Philosophy of Mind, 6) Theory of Language and 7) Philosophical Theology.

As it would be impossible to engage each and every chapter or part here, I have chosen one chapter from the book’s seventh part for special consideration; namely, Chapter 33: “Sacraments” by Dominic Holtz, O.P.

Holtz begins noting that Aquinas “recognizes as sacraments instituted by Christ those rites so recognized by the Latin Church in the thirteenth century: above all Baptism and Eucharist, but also Confirmation, Penance, Extreme Unction, Order, and Matrimony.”[p. 448]

The chapter is divided into three parts: Sacraments as Worship, Sacraments as Signs, and Sacraments as Causes. Most interesting, particularly in relation to the review that follows, Holtz notes:

There is … a broader way to speak of sacraments, namely as signs of sacred realities. Taken at its broadest, it might be possible to claim that everything created, insofar as it is what it is, insofar as it participates in some way in God’s perfection, is a sign of a sacred thing, namely, of God’s own being. Aquinas, however, is not inclined to use the term “sacrament” in this way.[p. 450]

Fairly straightforward, the chapter is nevertheless clear and concise. More generally, the Handbook is an excellent addition to Stump’s and Kretzmann’s The Cambridge Companion to Aquinas. A helpful resource for specialist and non-specialist alike.

In this Handbook, Adams, Pattison and Ward set out to convince the reader that “theology and modern European thought …. belong together,”[p. 1] and that theology has the resources “to contribute–on its own terms–to the continuing debate.”[pp. 1-2] The Handbook includes thirty-one chapters grouped into six post-Introduction parts: 1) Identity, 2) The Human Condition, 3) The Age of Revolution, 4) The World, 5) Ways of Knowing and 6) Theology.

Here again, it would be impossible to engage each and every chapter or part here, and so I have chosen one chapter from the book’s sixth part for special consideration; namely, Chapter 29: “Sacramentality” by David Brown. In what follows, I will summarize Brown’s chapter, and then offer several general reflections on the volume as a whole.

Brown begins by noting, over and against those who “focus exclusively upon either the seven acknowledged sacraments of the Roman Catholic tradition, or else more narrowly on the two (Baptism and Eucharist) accepted by Protestant and Catholic alike,” that “the term [i.e., sacrament] could be applied to almost any material reality that symbolically mediated the divine presence.”[p. 615] His more particular aim here, however, is to “acknowledge … earlier modern attempts,” and by earlier he means earlier than Nouvelle Théologie, “to use the notion to ground a sense of divine presence in the world.”[p. 615]

These earlier modern attempts are considered in five parts. Brown begins in Part 1 with “Platonism and the Romantic Movement,” engaging Coleridge, Wordsworth and others. Then, in Part 2, he considers “Ruskin and the Symbolist Movement.” Here, “human creativity could … be seen as sacramental.”[p. 619] In Part 3, “Disenchantment and Responses from Secular and Sacred,” Brown discusses Weber and those who preferred “a weaker, non-theistic version of … transcendental moments.”[p. 624] These secular responses of Joyce and Heidegger are contrasted with the sacred responses of Elliot, Auden, Chesterton and Jones. Part 4 covers “Nouvelle Théologie,” and its emphasis upon “grace … already operative within nature itself.”[p.627] Finally, in Part 5, Brown maps “The Way Forward,” i.e., the recognition of God’s generosity in addressing “humanity everywhere and not just within the Church.”[p. 629]

A succinct introduction to Brown’s broad sacramentality against the backdrop of modern European thought, this essay is essential reading. With regard to the volume as a whole, the definition of terms (i.e., ‘theology,’ ‘modernity,’ ‘Europe’ and ‘thought’) in the “Introduction” was not only helpful, but just plain responsible. And the inclusion of an “Afterword,” in which the editors conclude that “modernity … remains an unfinished project,”[p. 677] and furthermore that this “unfinished project … will require … the continuation of the relations between” theology and philosophy,[p. 678] pulls together these various strands into one coherent whole. An excellent collection. Highly recommended.

The last Tidbits was on Art and Artists. It was intended to be wide ranging. This week, following the Rookmaaker symposium, tidbits will be…