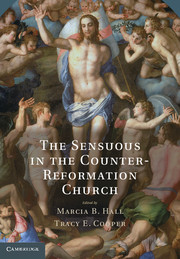 While a volume like this is quite difficult to read given the fact that no attempt has been made to interrelate the various essays, there is no doubt about the importance of the contribution it makes to our understanding of post-Reformation history. The art historian (and spy) Anthony Blunt in his influential work  of 1940, Artistic Theory in Italy 1450-1660, had assumed a strong top-down strategy in the Counter-Reformation’s approach to art, with various approaches tolerated during the Renaissance now firmly excluded. But this detailed survey of actual practice suggests a quite different perspective. The Roman Catholic Church of the time was itself divided, with everything from dogmatic Puritanism to endorsement of the sensuous and even the erotic as a way of deepening faith.

Thus on the one hand there is Erasmus’ suspicion of images, the saintly Charles Borromeo’s forbidding of comedy and dance in his own diocese of Milan, and Pope Clement VIII’s detailed inspection of churches in Rome with his subsequent instruction that quite a number of works of art were to be removed on the grounds that they were religiously unsuitable. Yet on the other hand there is the failure of quite a few of those churches to obey the pope’s demands (presumably hoping for fairer weather under another pope), the relatively little attention devoted to the issue at the Council of Trent, and continuing engagement of artists with not only nudity in the Christ child but even hints of pubic hair on the Cross. It would be all too easy to interpret those last moves as representing the continuing influence of paganism on Renaissance ideas but more probably they were seen as a way of stressing the full reality of the incarnation. They can also be viewed as part of a wider CounterReformation strategy to actively engage the viewer. So, while Michelangelo’s attempt to symbolize the reality and significance of Christ’s resurrection through the perfection of a naked body came to be rejected, most forms of sensual appeal were not.

In that appeal two new religious orders played a decisive role, the Jesuits and the Oratorians. Central to the Spiritual Exercises of St Ignatius Loyola had been an appeal to use all the senses in appropriating the narrative of our salvation, and so significantly the Jesuits were one group that resisted Clement’s condemnation of some of the art in their own church of the Gesù in Rome. But the founder of the Oratorians is an even clearer instance of how important the appeal of art had become. Like the Jesuits the Oratorians used theatre as one of their principal forms of evangelization, and indeed our word oratorio derives from one type of presentation that they employed. Their founder, St Philip Neri, however, himself went one stage further, with several instances on record of him entering into a religious trance before specific paintings, as he contemplated the significance of the events being narrated through the art before his eyes.

Perhaps the best example from the book of how matters are seldom quite as simple as they might initially appear is the attitude of the Dominican friar, Girolamo Savonarola, who not long after his ‘bonfire of vanities’ in Florence was burnt at the stake, for despite that bonfire his writings reveal someone deeply sensitive to the positive potential of images in religious devotion, indeed someone who profoundly influenced St Philip in his own approach to the same issue. 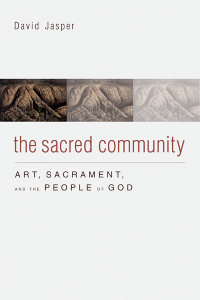 In this dense monograph, David Jasper, Professor of Literature and Theology at Glasgow University, is concluding his work of “three exercises in theology and the arts”[xi] that began with The Sacred Desert (2004), and continued with The Sacred Body (2009).

Jasper explores themes of the Bible and Sacred Space, the sacrificial praise of the Eucharist, issues of Evil and Betrayal, Pilgrimage, Repentance, the “Artist and the Mind of God,” Art and oppression, Friendship, Architecture and finally contemporary society.  This massive variety of themes might appear wide ranging, but Jasper makes some profound connections between seemingly dissonant topics and diverse figures (e.g. connecting the art work of Chinese painter Ding Fang and German painter/sculptor Anselm Kiefer, with Nigerian poet Wole Soyinka).

The high point of the book is in chapter 11, “The Church and the Sacred Community in Contemporary Society.”  This is not so much about the sacred community’s role in society as it is the role of the artist within the sacred community of this contemporary society, with its key point being that “the poet, the musician and the artist are never more needed by the community that is the church than today, the church whose religion so often can become the place of … ‘poor little talkative Christianity.’”[p. 159] This chapter is perhaps the most beautiful, as Jasper plays with images of light and shadow, voice and silence, and the pursuit of each within its opposite.  Throughout, Jasper offers an interesting take on the intersection of community, art and sacrament centering the life of the body of faith upon the Sanctus – the angelic hymn from Isaiah 6, and a climactic moment in Eucharistic liturgies.

While overall I think this book to be edifying, I find one significant challenge with it.  Given that the purpose of this project is one in which “the nature of the sacred community be given consideration,”[p. 2] one would expect a style of prose that would be more accessible to that community, especially as to “think liturgically” is to “think as a part of a …community,” which is his stated goal.[p. 3] Jasper takes on a style that is at times convoluted, and often rife with parenthetical phrases that can require the reader to repeat a given sentence multiple times in order to get the gist. As an example, Jasper writes:

Only when we begin to understand each other (an understanding that allows the possibility, and only the possibility, that this writing may eventually evoke understanding as meaning) does that action (liturgy is at its heart, and most deeply a commitment to “doing” in remembrance lest we forget ourselves and each other) provoke my sense of being-here (in myself) into becoming a sense (more deeply felt and known) of being-toward.[pp. 10-11]

This parenthetic style is most evident in Chapter 1, where Jasper appears to be experimenting with a writing style that borders on stream-of-consciousness.  The prose tightens up in later chapters, but the style still often stands as a barrier to understanding.

The Sacred Community, will be a satisfying read for those who are not seeking a formally academic work, but seek a more contemplative and free flowing approach to the place of art and sacrament within the Christian community.  The moments of insight and beauty outweigh the difficult prose, but nevertheless the reader must have patience in order to extract the full meaning of the text.