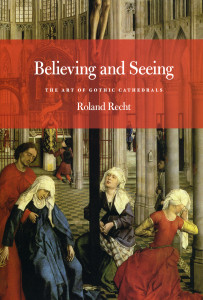 Originally published in 1999 as Le croire et le voir: L’art des cathédrales, and translated into English a decade later, this book happily takes the thought of Roland Recht beyond the Francophone world which has benefited from his expertise for decades. Through this book, a fresh voice on Gothic architecture is introduced to an audience perhaps more familiar with the classic treatment on The Gothic Cathedral by Christopher Wilson, and the arguments of Panofsky, Von Simson, and Mâle concerning the metaphysics of Gothic churches, and the idealized Gothic vision of A. W. N. Pugin.

Indeed, the latter is conspicuous by his absence in the first part of Recht’s book which is a survey of the concept of Gothic architecture as it has been understood by predominantly non-British art historians and architects. Rather as one might first circumnavigate the exterior of a great cathedral so as to acquaint oneself with its form and structure before exploring its interior, Recht gives an overview of the Gothic form and attempts to systematize and understand it. The second part of his book then draws one into the cathedral to explore its diverse elements: devotional and liturgical sculpture, reliquaries and stained glass, the piers and vaults. And Recht considers both the people who made and used these artifacts – sculptors, glassmakers, architects, even Dominican friar preachers – and the function of these artistic elements within the building. There is much richness in Recht’s writing as he adds layer upon layer, as full of colour as the medieval reliquaries he examines.

This is particularly true of Recht’s exploration of the use of colour in a cathedral. Despite the polychromy of Gothic revival churches, one is still prone to forgetting how different our white-washed and unpainted cathedrals are from their original state. Recht reminds us that “architectural polychromy had, in fact, a decisive effect on the perception of the stained glass windows.”[p. 185] In effect, we no longer see these buildings as they were intended; something vital, it seems to me, has faded along with the polychromy.

But I am disappointed that Recht rejects the view of Panofsky and others that Scholasticism or the metaphysics of light informed Gothic architecture. Even after Recht gives us an excellent philosophical and theological overview of the medieval science of optics and the contemporary desire to see the mysteries of God, he says, rather bewilderingly, “I do not think there is a direct causal connection between the questions of optics… and the new conception of space…  For all their sumptuous elaboration, the works of art never serve to illustrate a philosophy, much less metaphysics.”[pp. 106, 107]

But, surely, the cathedral does serve to illustrate Christian faith in the invisible God who has made himself visible in Christ? As Recht himself says: “the visible needs to be interpreted if we’re to gain access to the invisible,”[p. 70] and it seems to me that his strong rejection of an underlying meta-narrative informing Gothic architecture has led to a failure to see what the visible reveals. For does not the complex Gothic cathedral serve to reveal the Incarnation? God is with us, and in Christ, heaven and earth meet. The Liturgy which animates the cathedral, is that unceasing parousia of Christ, such that the cathedral is an icon of the eschatological Jerusalem, for within her walls Christ truly comes again in the Eucharist, and in Holy Communion heaven and earth meet in every Christian heart.

In this edited volume, James K.A. Smith presents an interdisciplinary conversation between theologians, economists, art historians and geographers on the topic of globalization and religion. This review will focus upon Smith’s introductory essay, wherein he explains: “we are interested in the links between globalization, capitalism, and secularization–and the valuations and permutations of ‘religion’ (by no means monolithic) that attend this constellation.”[pp.3-4] Smith goes on to identify two sets of questions: “the first cluster of questions revolves around the theoretical expectations and descriptive evaluations of religion generated by the modern social sciences.”[pp.5-6] The “second set of questions … concern the shape of religious responses to and evaluations of globalization as the globalization of capitalist organization of commerce and exchange.”[p. 6] The themes of secularity and globalization are engaged throughout, and this with an eye towards reenchantment. But what does Smith mean by reenchantment? He explains: “This epistemological implication of the postmodern critique of Enlightenment notions of rationality–breaking open the spaces of the public and political sphere for religious voices and identities–finds an ontological analogue in the reenchantment of the world.”[p. 10] Over and against secular disenchantment, Smith is keen “to think the world otherwise.”[p. 11] And this, says Smith, requires the imagination. The essays that follow, then, “constitute an imaginative vision of reenchantment.”[p. 13] A unique collection, this volume will appeal to specialists interested in “globalization as religion.”[p. 13]