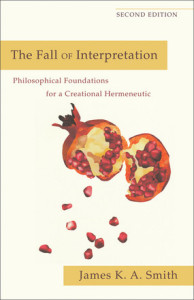 In this 2nd edition of his first book, James K.A. Smith, Professor of Philosophy at Calvin College, offers “a creative repetition and faithful extension of [his] original argument.”[p. 10] Smith begins:

Interpretation has long been a sin. Understood as a postlapsarian phenomenon (occurring after the Fall) from which humanity must be redeemed, hermeneutics has traditionally been linked with the curse and banishment from the Garden. Interpretation, in short, is a result of the Fall, is itself a fall–from the intelligible to the sensible, from immediacy to mediation, from reading to hermeneutics…. Hermeneutics is something to be overcome by redemption, whereby the curse of interpretation will be removed in a hermeneutical paradise where interpretation is absent.[pp. 13-14]

He continues: “The task of this book is to explore various understandings of interpretation in light of these common categories of ‘creation’ and ‘Fall.'”[p. 14]

In Part 1, Smith considers theologians who locate interpretation in the Fall. In Chapter 1, Smith summarizes and critiques the “present immediacy model.” He explains: “Interpretation, from this perspective, is a mediation that is to be overcome, restoring prelapsarian (pre-Fall) immediacy.”[p. 17] In Chapter 2, Smith summarizes and critiques the “eschatological immediacy model.” The latter model is similar to the former except that interpretation is overcome, not in the here and now, but in the eschaton. In both models, interpretation is fallen, and creation (i.e., immediacy) must be regained.

In Part 3, Smith proposes a “creational model” that “stands in contrast to both [of the previous] models and yet is indebted to both.”[p. 138] Locating interpretation in the goodness of creation, as opposed to the Fall, he defines interpretation as “a subjective construal of an objective reality.”[p. 187] Acknowledging that this might lead to criticisms of relativism, Smith goes on to argue for “a phenomenological constraint on interpretation (’empirical transcendentals’) and an ethical criterion (love)”[p. 199] before addressing the “special hermeneutic” required by the incarnation and the Scriptures in the new to this edition Chapter 7.

Positively, “Figure 1. Models of Interpretations of Interpretation” on p. 20 provides a helpful overview of the models and the book. Readers short on time might skim the “Introduction,” consult this chart, and then read “Part 3: Toward a Creational Hermeneutic.” That said, Smith’s fluid prose will tempt the busiest of readers to slow down and make time for the details of his argument. The book evinces a careful and creative reading of primary texts, presents a well-argued and provocative thesis, and speaks to difficult questions with clarity and grace.

Recommended for readers of Smith’s Who’s Afraid of Postmodernism?, as well as those with more general interest in the field of philosophical hermeneutics. The Fall of Interpretation should be read alongside David Brown’s “hermeneutics of Pentecost and crib,”[1] particularly with regard to Smith’s “special hermeneutic.” 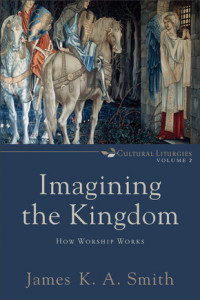 In this, the second of three volumes in the “Cultural Liturgies” series, Smith is keen “to articulate a liturgical anthropology that accounts for the importance of the kinesthetic and the poetic – that recognizes and explains the intertwinement of the body and story as the nexus of formation that ultimately generates action.”[pp. 15-16]

Much of our action is not the fruit of conscious deliberation; instead much of what we do grows out of our passional orientation to the world – affected by all the ways we’ve been primed to perceive the world. In short, our action emerges from how we imagine the world.[pp. 31-32]

And what does Smith mean by “imagination”? He means “a kind of faculty by which we navigate and make sense of our world, but in ways and on a register that flies below the radar of conscious reflection, and specifically in ways that are fundamentally aesthetic in nature.”[p. 19] For Smith, then, what we need is more, though certainly not less, than a worldview.

After building the theoretical toolbox of Part 1 Smith goes on to use the toolbox in Part 2; that is to say, he goes on to “explore the specific implications of a liturgical anthropology for an understanding of Christian worship and formation.”[xviii, cf. p. 101] Put simply, Smith is concerned with how worship works, and here he means to emphasize worship as not merely expressive, but formative.

Generally speaking, Smith has delivered yet another well-argued and provocative thesis. Even if one does not agree with each and every one of his answers – I certainly do not – the questions, and the answers, merit serious consideration.

More specifically, and of particular interest to me, Smith makes reference to “the importance of the arts for the witness of the church” as a “significant implication of [his] argument,”[p. 21] but does little to develop this notion with any specificity. Not surprisingly, he distances himself from the language of “natural theology,” characterizing his project as a “theology of nature.”[p. 33 fn. 5; cf. pp. 126-127 fn. 44] That this will “allay Barthian worries”[p. 33 fn. 5] is doubtful given Smith’s anthropology which is chiefly informed by philosophy, sociology and psychology.[2] I don’t mean to champion Barth, but we need not abuse him.

Recommended for practitioners comfortable with philosophical language, as well as scholars interested in conversations of embodiment and worship.

The year 2018 saw the publication of a book jointly written by David Brown and Gavin Hopps, The Extravagance of Music (London: Palgrave Macmilllan)….