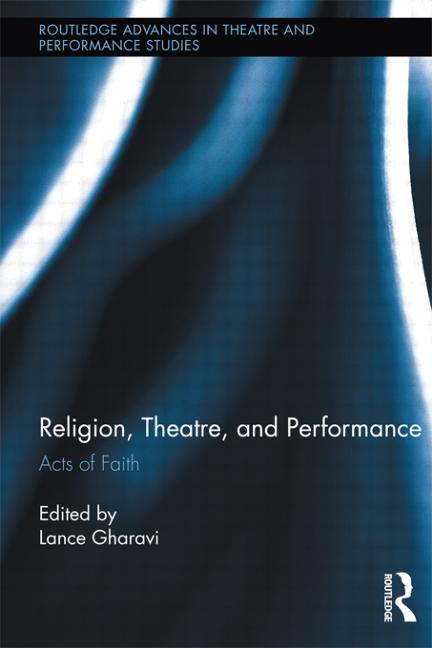 The contributors to this volume make the argument that theatre and performance studies should take religion seriously, admitting that religion is not just a private matter, but performed publicly on the world stage. This collection of essays seeks to counteract the hesitancy of performance studies scholars to engage with religion. Anything and everything religious is game for performative analysis, whether the spiritual logic of ritual (Donnalee Dox), the liberating potential of tantra (Anthony Kubiak), the boundary-pushing trends in Jewish media (Henry Bial), the plain speech acts of Quakerism (Tamara Underiner), or the correspondence between Israeli theatre, religious ceremony, and everyday life (Gad Kaynar). For the purpose of this review, however, I would like to focus on the last essay in this collection, evaluating the book as a whole by examining John Fletcher’s reflection on divergent performances of interfaith coexistence. Fletcher, who is assistant professor of theatre history and women’s and gender studies at Louisiana State University, looks in particular at evangelical performances of intolerance. 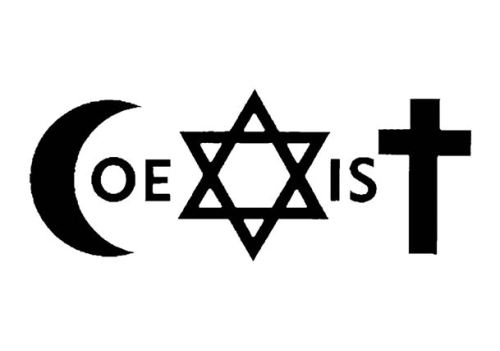 One way of achieving interfaith coexistence, according to Fletcher, is the “liberal-democratic” performance of tolerance. This approach assumes that religion is a private matter, and in order to get along in civil society, we have to love each other and live in peace. A perfect example of this is the COEXIST bumper sticker, which is a spin-off of Piotr Mlodozeniec’s original design displayed in 2001 as part of the Coexistence exhibition at Jerusalem’s Museum of the Seam. Whereas the original design emphasized the coexistence of Abrahamic faiths, the pop culture icon announces and enacts the coexistence of all spiritual traditions. Whether preached during U2’s 2005-06 Vertigo Tour or plastered on the bumpers of liberal evangelists, this symbol is a performance of tolerance that not only suggests coexistence (can we all get along?), but commands it (you will get along!).[p. 230]

According to Fletcher, this is a self-defeating and corrosive performance of coexistence. It enacts intolerance of intolerance, disapproval of disapproval. In doing so, it misconstrues religion as something inherently revisable and reduces religion to exchangeable symbols. In short, this performance fails, despite its popularity. A better approach is the performance of coexistence modeled by evangelicals in public debates. Fletcher zeroes in on William Lane Craig, Research Professor of Philosophy at Talbot School of Theology, who models a “good faith intolerance” that respects religious convictions enough to defend and critique positions and practice the art of persuasion. Fletcher himself is not an evangelical, but he believes this performance of evangelical conviction is a better alternative to liberal-democratic let’s-all-get-along-wishy-washiness. Richard Mouw calls this “convicted civility” (see his book Uncommon Decency), which, among many others things, is a fitting example of faith working itself out in love.

I find it incredibly fascinating that “convicted civility” can be deemed a fitting way of life, not by theologians or ethicists, but from the perspective of performance studies. One of the reasons I loved this book is because it shows that since religion is a comprehensive way of life, it can be examined by every academic discipline and never be exhausted. And as a Christian, it is always encouraging to me when anthropologists, sociologists, psychologists, and other scholars explore Christian practices and find them compelling.

Personal remarks aside, I recommend this book as a prime example of the benefits and dangers of interdisciplinary dialogue. I hope the summary of Flether’s essay showed one major benefit; namely, the opportunity to gain illuminating perspective on a familiar reality. One major danger, however, is that disciplines may not be understood on their own terms, which may lead to interesting interactions, but fail to foster real dialogue. For the most part, the essays in this book do not fall prey to this danger; rather, they demonstrate that religion is a public performance open to analysis by insiders and outsiders alike. 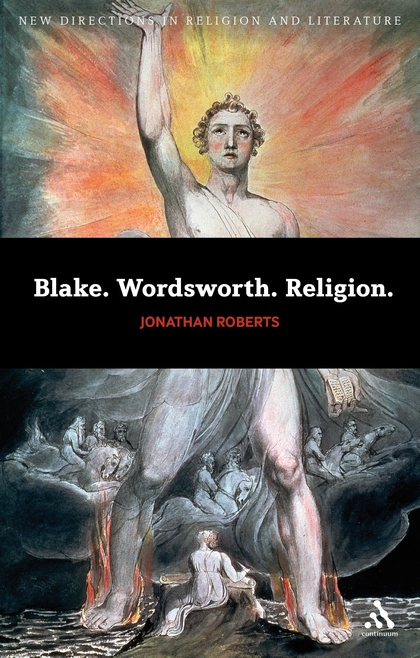 In this stimulating and enjoyable book, Jonathan Roberts, Senior Lecturer in English at the University of Liverpool, UK, effects something of a reconciliation between traditionally isolated methods of hermeneutics. Roberts delineates the controlling paradigms for literary criticism and argues that these texts are best understood in light of all of the paradigms operating in mutual conjunction and not in perpetual antagonism. Discussion of religion in the modern world is, according to Roberts, at an impasse “due in part to the antagonistic hermeneutical structure of many contemporary debates”[p. 1] That said, Roberts “look[s] to poetry for a different type of engagement with religion.”[p. 1]

Three main issues run through the body of the work: (1) hermeneutics, (2) the nature of “religious” experience – with the question of defining “religious experience” being a sub-question within this strand, and (3) the problem of finding a proper communicational medium for this experience.

Having been presented with an introduction to Blake’s poem “To Butts,” and an extract from Wordsworth’s “Excursion,” the reader is led through the maze of contemporary approaches. In the end Roberts’s main contention is that no one approach can claim the title of ‘the approach’ to either these poetical texts or to the religious experience to which they point. The book oscillates back and forth between the hermeneutics of the poets and the nature of religious experience, because, for Roberts, what is predicated of the one is implicitly true of the other. Thus, Roberts’ main contention regarding the practices of the different methods of criticism as with the expression of religious experience is that “each (method) takes a portion of existence and fancies that the whole.”[p. 88] In Roberts’ presentation of the methods, he achieves with the discussion of religion and literary criticism what he believes Blake and Wordsworth to have achieved with their poetry: namely, a more complex and holistic, a more cooperative and dialectical approach to religious experiences and to the texts which purport them.