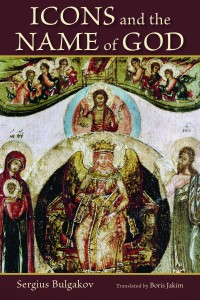 The Orthodox theologian Sergius Bulgakov (1871-1944) remains a controversial, but nevertheless important, figure in the Orthodox world, so much so that he is sometimes referred to as the von Balthasar of the East. The controversy surrounds Bulgakov’s sophiology, an idea condemned as heretical by the Orthodox Church. Regardless of this condemnation, any person interested in art, sacramental theology, theories of embodiment, theology of icons, deification, or anything generally concerned with God’s presence in the world would greatly benefit from this book.

Bulgakov gently introduces the reader into the theological depths of iconography by tracing the history of thought that precedes and follows the seventh ecumenical council, the council that affirmed the veneration of icons. He argues that while the conclusion of the council is correct, the dogma, or justification, is flawed. In fact, he maintains that the iconoclasts have better arguments and so he sets out to provide proper argumentation. The motivation for this endeavour is to defend onomatodoxism: the Name of God is God Himself.

The main problem with the debate surrounding icon veneration is that both the icon venerators and the iconoclasts appeal to christology (i.e., Incarnation). The question of icons, according to Bulgakov, must be moved into another domain “to the domain of general theology and anthropology in their interrelation; and this interrelation is given by sophiology (which, to a certain degree, includes christology).”[p. 25] What is sophiology? In short, sophiology concerns the visibility of the invisible, or the wisdom of God in the world–and therefore ‘outside’ God–and divine wisdom in God. This sophiological antinomy is necessary for revelation. He notes:

If there is no mystery and depth, if the object of revelation is completely knowable and exhaustible by a one-sided act of cognition, then we have knowledge, not revelation. But on the other hand if the mystery is not known, not revealed, not disclosed, it simply does not exist for man, for the unknowability of the mystery in revelation is correlative with the knowledge of it.[p. 39]

The connection with icons is obvious. The icon is a concrete example of the antinomy of the invisibility and the visibility of God, and is therefore revelatory.

Going deeper into the specifics of the argument, Bulgakov turns to the artistic element of the icon, for the icon is firstly a work of art. Bulgakov’s philosophical reflections on art are profound, and the book is worth reading even if it is only for these reflections. Art expresses the meaning, the name, the idea of a thing; it takes one beyond the image to the proto-image. More cryptically, he notes: “art attests to the images of being, and this testimony is not a deception (not even one that elevates us) but a tale told in the language of the world about pre-eternal being; it is testimony of creaturely sophianicity about the noncreaturely Sophia.”[p. 49] Bulgakov unpacks these dense ideas and answers questions such as: What is the difference between religious art and icons, or between the Holy Gifts of the Eucharist and icons? Is it possible to have new icon forms? The last part of the book, “The Name of God,” follows the same logic Bulgakov gives for icons, and he concludes that “in the Name of God is present the Power of God, which is inseparable from the Essence of God and in this sense is God Himself.”[p. 160]

Icons and the Name of God is philosophically and theologically dense, a difficult read, and yet certainly worth the effort. I do not see the need to embrace Bulgakov’s sophiological antinomy in order to defend icons from idolatry, perhaps a reflection of my limited understanding, nonetheless I gleaned much from Bulgakov’s refined arguments.

In her slender, provocative volume, Margaret R. Miles illumines the tumultuous history of the breast as a symbol in Western art from the late medieval to early modern period. She narrows her focus to the breast in order to trace it as a once religious symbol of nurturing to the sexualisation and medicalisation of the body in the modern period. Undergirding much of her claim are the tensions between archetypes of women placed against one another in the art of the period, chiefly the Whore and the Madonna.

What Miles does well, and perhaps best, is engage each contextual argument on its own terms. She draws conclusions from the period, but does not force modern assumptions onto it. When handing the commonality of the breast seen in the later eighteenth century as temptation, being only seen exposed on Eve or witches, Miles leaves room for the reader to tease out the implications. That said, she suggests that this is intended to associate the breast no longer with the fertility of faith as was once enjoyed two hundred years earlier in the common portraiture of the Madonna feeding the infant Jesus.

Furthermore, Miles engages an important critical element of feminist studies called the male gaze, though she does so with an eye for context. The male gaze, put simply, is the subjective power of a man in interpreting the place and role of women. Though there are extremely complicated aspects to the theory, what Miles engages is a very literal understanding of the male gaze. She notes the increasing norm of men being the primary artists commissioned to paint portraiture and points out the notable difference of representation that follows, including a scare amount of nursing portraits by the eighteenth century.

Overall, Miles has delivered a careful analysis that will prove essential and an enjoyable read to art historians, feminist critics and theologians, and those interested in the ideology of the late medieval and early modern period.