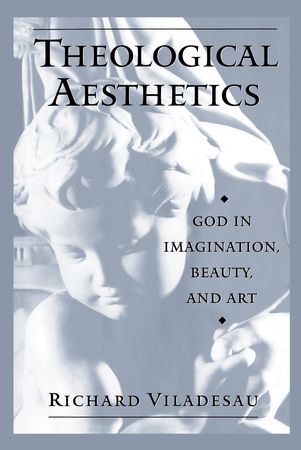 A classic in the field, Viladesau’s Theological Aesthetics begins with the possibility of theological aesthetics, addressing approaches “from above” as well as “from below.” Two sections are especially pertinent.

In Chapter 4, Viladesau “explores the connection of beauty with ‘natural theology.'”[p. 103] What follows is a historical theology of “ascent” that runs from Augustine to Aquinas. Viladesau then summarizes the approach of Jean-Dominique Robert, noting: “Robert proposes two different “ways” to God. They are … (1) from the creative act and its inspiration, both of which imply a dependence on an Other; and (2) from works of art, which are a kind of witness to an encounter with ineffable mystery.”[p. 118] That said, Viladesau laments the fact that “Robert has not fully carried through his project,”[p. 120] and goes on to “suggest that a more fruitful modern approach may be derived from the application to aesthetic experience of the transcendental method as developed by such thinkers as Coreth, Lotz, Rahner, and Lonergan.”[p. 120] In sum, “the condition of possibility for the experience of beauty … is the implicit and unavoidable co-affirmation of ultimate Beauty.”[p. 138]

In Chapter 6, Viladesau examines two theological objections against the arts: 1) “the problem of idolatry,” and 2) “the problem of distraction.”[p. 209] These objections, however, are addressed from “the Perspective of the Cross”[p. 189] before Viladesau concludes with an excerpt from Alexander Solzhenitsyn’s Nobel Lecture:

Then perhaps the old tri-unity of Truth, Goodness, and Beauty is not simply a showy, worn-out formula as we thought in the time of our self-confident, materialistic youth?  If the tops of these three trees meet, as scholars have declared, but the too obvious, too straight sprouts of Truth and Goodness have been knocked down, cut off, and do not grow–then perhaps the capricious, unpredictable, unexpected sprouts of Beauty will force their way through and rise to that very same place, and thus carry out the work for all three?

And then it is not a mistake, but a prophecy that we can find written in Dostoievsky: ‘Beauty will save the world.'[pp.213-214]

Balanced yet provocative, this is essential reading.

Cecilia González-Andrieu, Professor of Theological Studies at Loyola Marymount University, begins: “This book, then, is an invitation to join me in discovering ways we can initiate new and fruitful encounters by cultivating our ability to engage works of human creativity, most often represented in what we call ‘the arts.'”[p. 6] Taking “the Golden Gate Bridge as a metaphor for this book,” she is seeking to build bridges between disciplines and cultures.

Chapter 2 begins with Avery Dulles and his notion of “the revelatory symbol.”[p. 13] Drawing on Pope John Paul II’s Letter to Artists and an address by then Cardinal Joseph Ratzinger, González-Andrieu suggests that art might function “as witness and producer of revelatory symbols.”[p. 18] Chapter 3 attempts to illustrate the point by way of an extended meditation on Luis Valdéz’s La Pastorela. Along these same lines, Chapter 4 considers the success of “Seeing Salvation: Images of Christ in Art,” and Chapter 5 its various difficulties. In Chapter 9, González-Andrieu returns to the Golden Gate Bridge, and three ways that art and the religious function: Art as Effective and Affective Carrier of a Religious Tradition, Art as a Source of Theology, and Art as a Bridge to the Glory of God.

Admirable for its celebration of the particular as well as its invitation to cross disciplines and cultures, the book nevertheless lacks focus, and prefers assertion to cogent argument. 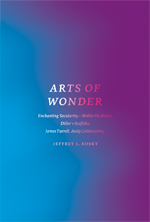 In this book, Jeffrey L. Kosky, Professor and Chair of the Department of Religion at Washington and Lee University, explores the work of several land artists with an eye towards “enchanting secularity.” 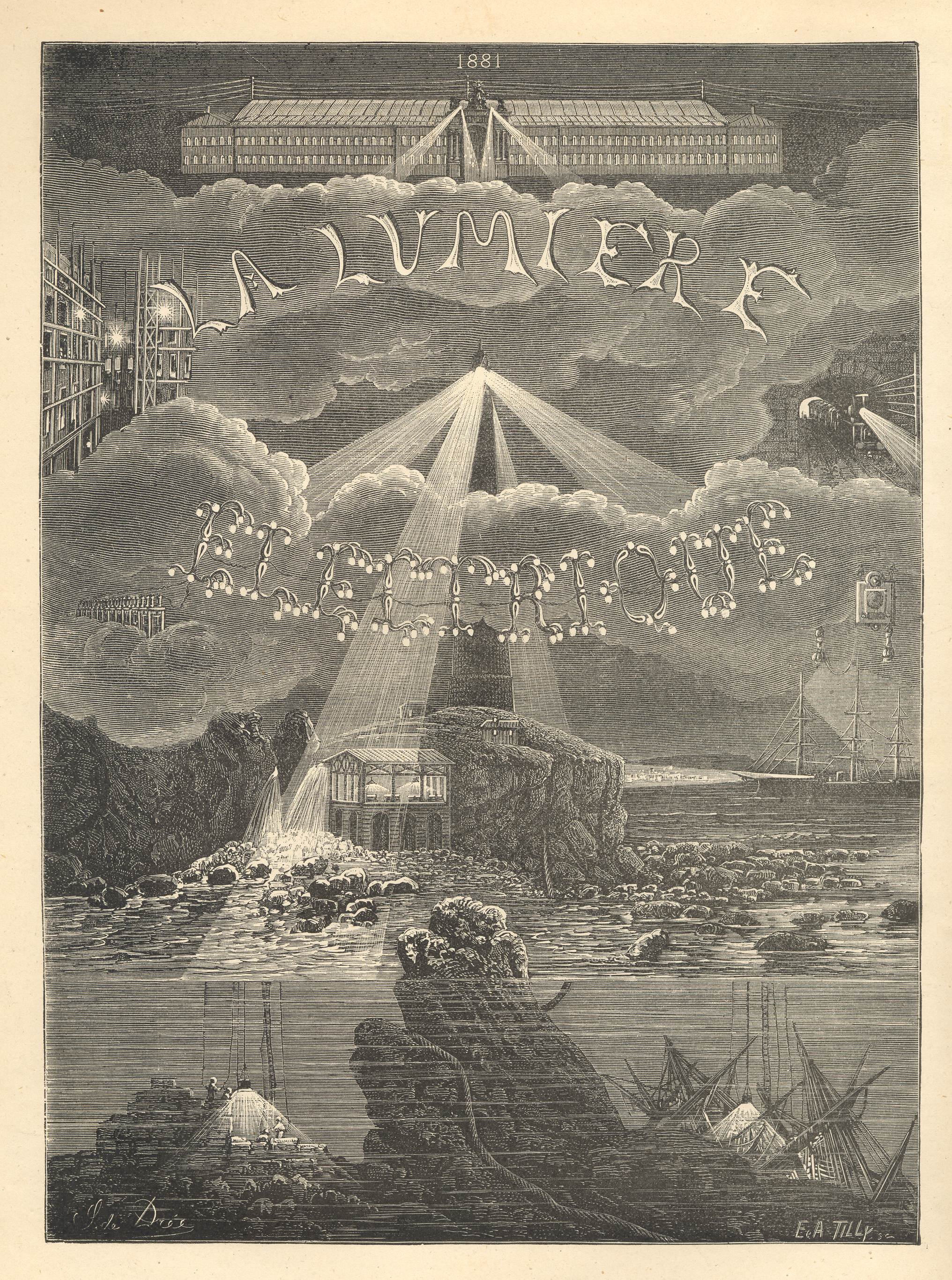 Taking Max Weber’s classic essay, “Science as a Vocation,” as his point of departure, Kosky brings the work of Walter De Maria, Diller + Scofidio, James Turrell and Andy Goldsworthy into “intimate encounters with modern disenchantment.”[xii] Kosky’s narrative begins with two pieces of art: the frontspiece to Christian Wolff’s Reasonable Thoughts on God, the World and the human Soul, and All things in General. Communicated to Lovers of Truth (1720), and the title page from Wolfgang Schivelbusch’s Disenchanted Night: The Industrialization of Light in the Nineteenth Century (1882, at right). In the former, the sun has a face, and, the clouds having passed, sheds light on the scene below.  Above the sun, a banner reads: “He/It brings back the light after the clouds.” In the latter, a lighthouse and celestial factory shed light on the waters below, and “The Apotheosis of Electricity” lights up the night sky, taking the place of the banner.  Kosky reads this as illustrating a movement from nature to technology, and God/Reason to self-assertive man. That said, Kosky does not argue for re-enchantment, but an enchanting secularity.  He concludes: “I have tried in this book to welcome the appeal of dwelling in this in-between, never fully enchanted, never fully disenchanted, never fully secular, never fully religious.”[p. 177]

There is much to like here, a fine marriage of Dillard-esque prose and high production quality. Nevertheless, it is evident from his conclusion that “Scholars in religious studies similarly avoid modern and contemporary art, except when such art explicitly deploys traditional symbolism or iconography”[p. 172] that he has overlooked David Brown‘s God and Enchantment of Place [pp. 94-95], Anthony Monti’s A Natural Theology of the Arts [pp. 114-117], George Pattison’s Art, Modernity and Faith, and T.J. Gorringe’s Earthly Visions [pp. 167ff.].  Each of these addresses particular modern and/or contemporary artists and their work beyond the purview of traditional symbolism or iconography, Brown dealing with Goldsworthy in particular, even if quite briefly. More fundamentally, Kosky ignores William Desmond’s point:

art cannot be the sanctus sanctorum in which the burden carried by religion, science and metaphysics can be sustained, and renewed. Art can be a carrier of transcendence, only if these others are themselves in robust spiritual shape…. Art is not the remnant that will save the rest. The impossible burden of transcendence is God. Without the religious, we collapse under the burden.[William Desmond, Art, Origins, Otherness, 289-290.]

Surely the same could be said of beauty.

The header photo, “beauty”, is copyright (c) 2008 sanberdoo and made available under a Creative Commons Attribution 2.0 Generic License.

UPDATE: Unfortunately, the upcoming symposium ‘Artistry and the Arc of the Atonement’, is postponed indefinitely. However, it will be rescheduled when it is possible…