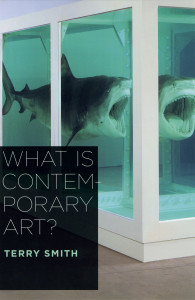 Terry Smith begins: “No idea about contemporary art is more pervasive than the idea that one can–even should–have no idea about it.”[p. 1] But this simply will not do. For, as Smith rather bluntly suggests, “this attitude amounts to a pluralist happy mix that seeks to pull up a bland, idiot mask over the most irreducible fact about art today.”[p. 1] In an effort to remove the mask, Smith states: “This book is organized around these three core meanings of the term “contemporary”: the immediate, the contemporaneous, and the cotemporal.”[p. 4]

Part 1, “Museums: Modern/Contemporary,” “explores the triumph of the exhibition over the collection,”[p. 9] He begins (Chapter 1) with the Museum of Modern Art, New York, arguing that it “remains the temple of … a defensive remodernism.”[p. 26] Put simply, when faced with “the paradox between institutionalism and contemporaneity,”[p. 36] MOMA chose the former with the result that contemporary art is viewed as part of modern art (i.e., the paradigm of modernism). Smith then considers Dia:Beacon (Chapter 2), Tate Modern (Chapter 3), Saatchi Gallery, London (Chapter 4) and the Guggenheim Museum (Chapter 5), suggesting: “How they ride this paradox is their answer to the question: What is contemporary art?”[p. 37]

When you stand in the atrium of the Guggenheim Museum, Bilbao, you know that you have arrived at contemporary art. If, at the end of the twentieth century and the opening of the twenty-first, there is one place on the planet where it can not only be found, but also experienced to the maximum, surely, it is here.[p. 71]

Naming it “one of the definitive works of contemporary art of the late twentieth century,”[p. 75] Smith continues:

The result is a kind of built form that is both sculptural and architectural–that is, it is like both, but not exactly either. It is a hybrid in which a very complex “sculpture” works as a building (here, an art gallery) and a very complex “architecture” exists as sculpture.[p. 75]

It is, according to Smith, “the world’s spiritual home of official, international, contemporary art, turn-of-the-millennium version.”[p. 86; cf. p. 200] But, to ask the book’s central question here: what is contemporary art? In this case it’s the experience museum. In the chapter that follows it’s “the all-around experience”[p. 92] of Matthew Barney’s Cremaster cycle. Incidentally, I saw Barney’s cycle at the exhibition “From Death to Death and Other Small Tales” at the Scottish Gallery of Modern Art this past summer though I must admit I failed to grasp its main theme from that all too brief exposure.

Part 3, “Markets: Global/Local,” “examines the markets for two kinds of contemporary art.”[p. 9] Chapter 7 addresses the global, and here the auction house is at the center. Tracey Emin’s “I’ve Got It All” [Il. 7.4, p. 131] might be seen as an (in)appropriate summary for this chapter. Chapter 8 addresses the local, and this through the Australian Aboriginal art movement. Smith then engages in a “Compare and Contrast” exercise, noting:

If one compares the marketing of the yBas [i.e., Young British Artists] to that of contemporary Australian Aboriginal art, it is evident that despite everything that is utterly different between them (and almost everything is), they have both benefited from the recent collapse of the distinction between primary and secondary markets, from the convergence between what used to be the quite separate provinces of the commercial gallery/specialist dealer and the auction house.[p. 139]

This leads, quite naturally, into Part 4, “Countercurrents: South/North,” where Smith considers the postcolonial turn (Chapter 9), and this with reference to the Bienal de La Habana. Smith’s discussion of another example, “East Art Map (2002) … a project in which Group Irwin mobilized  twenty art critics, curators, and artists to preset up to ten curatorial art projects from their respective countries during the past fifty years,”[p. 167] was consistent with the exhibition I saw at the Palais de Tokyo (Paris, France) this past August: “Nouvelles Vagues … a large-scale event organized by 21 international young curators (hailing from 13 different countries).”[Exhibition Catalogue, p. 5]

In Part 5, “Contemporaneity: Times/Places,” Smith addresses two pronounced tendencies in contemporary art: “the taking up of a viewer’s time,”[p. 194; cf. pp. 214-215] and the related set of “world-picturing, place-making, and connectivity.”[p. 235]. More interesting to my mind, however, is Smith’s discussion of “certain kinds of contemporary art as the core elements of a contemporary religion,”[p. 200] and this with reference to several museums and a number of artists.

Finally, in Part 6, “An Art Historical Hypothesis,” Smith “show[s] his disciplinary hand,”[p. 241] and then goes on “to review the range of answers to the question of contemporary art that has been offered,”[p. 244] before suggesting: “Contemporaneity is the fundamental condition of our times.“[p. 255] That said, Smith argues: “For the history of contemporary art, the core object of inquiry is the art, the ideas, the cultural practices and the values that are created within the conditions of contemporaneity.”[p. 256] Smith has, he says, “been attempting to lay the groundwork for such a history.”[p. 264] The book concludes with three currents in contemporary art which “might suggest the classic logic of the dialectic.”[p. 268] But, Smith counters, “synthesis will never occur.”[p. 268] He explains: “Like so much else in contemporary conditions, they are, at once, irreconcilable and indissociable.  Their friction in relation to each other is of their essence.  They are, in a word, antinomies…. This is how art today is answering the question of its contemporaneity.“[p. 269]

Readers of Smith’s book may also be interested in Richard Meyer’s What Was Contemporary Art? which “takes a different tack.”[p. 15] Either way, it’s clear that answering the question “What is contemporary art?” isn’t so easy as one might think, and learning this is certainly one of the benefits of reading Smith’s introduction.