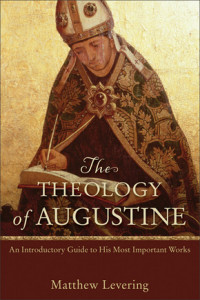 In The Theology of Augustine, Matthew Levering, professor of religious studies at the University of Dayton, applies his considerable knowledge of Catholic theology toward this most recent publication which aims “to introduce Augustine’s major ideas by surveying his most important works in their entirety” [xii]. The works Levering chooses — On Christian Doctrine, Answer to Faustus, Homilies on the First Epistle of John, On the Predestination of the Saints, Confessions, City of God, and On the Trinity — each receive a chapter’s worth of treatment and when taken together are meant to give a sense of Augustine’s thought.

The book finds its place in a small but important theological genre – the simple summary.  Alongside books such as Ford Lewis Battles’ companion to Calvin’s Institutes or Geoffrey Bromiley’s Introduction to the Theology of Karl Barth, The Theology of Augustine provides an accessible companion to the thought of an otherwise imposing figure and his major works.  After a brief biographical sketch of Augustine’s life in the introduction, Levering turns to each of these works and follows the shape of the text, neatly summarizing sections and occasionally highlighting salient points or important quotes.

Levering’s prose is exactly what one would hope to be in this kind of book.  His writing is direct and easily comprehended, and he is intentional in making sure his own interpretions and musings on Augustine are as limited as is possible.  In the main body of the text Levering wears his own erudition lightly, but the footnotes demonstrate his grasp of the immense body of secondary literature that has accumulated around Augustine. Those footnotes together with Levering’s bibliography are an excellent introduction to Augustinian studies. The book is not merely paraphrase, though.  Levering will from time to time pause to quote Augustine (particualrly the memorable passages in Confessions) or to note his powerful use of imagery, as in On Christian Doctrine when, while discussing signs and signification, Augustine remarks that, “We cannot place our happiness in worldly things; this would be like a bride loving her wedding ring more than she loves her bridegroom” [54].

One of the more helpful aspects of the book is the attention Levering gives to Augustine’s exegetical practices.  Rather than passing over how Augustine handles particular passages of Scripture, Levering includes these elements of Augustine’s argumentation.  This inclusion is not only demonstrates just how important Scriptural reasoning was for Augustine but also serves as a glimpse into patristic strategies for interpreting the Bible.

To appropriate an argument of Augustine’s, the book best serves as a sign with respect to Augustine.  It is not to be mistaken for the real thing (the thing signified – Augustine himself), but so long as it is read by those who wish to engage with this theological colossus directly but are in need of an introduction, it fills a notable gap in the secondary literature.  Those who desire some knowledge of the terrain before they set off into City of God or On the Trinity will find in Levering a faithful and knowledgeable guide. 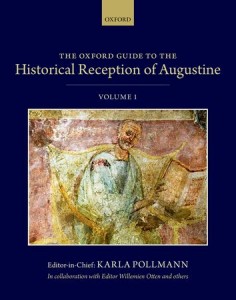 In contrast to Levering’s introduction, The Oxford Guide to the Historical Reception of Augustine is … well, long and expensive. But don’t let that deter you. Even if the sheer size of these volumes, or their accompanying £450.00/$895.00 price tag, are prohibitive, you might head to your local university or seminary library, and take advantage of this excellent resource.

With regard to the aim of these volumes, Pollman comments:

The Oxford Guide to the Historical Reception of Augustine (henceforward, OGHRA) intends to outline this gigantic, complex, and intricate history of Aug.’s reception from his death up to the present, taking into account not only theology and philosophy, but also the history of culture overall…. The … goal of this project is to identify, analyse, and describe some of the seemingly innumerable ways into the reception of Aug. that have been traversed through the ages.[p. 3]

That said, the first volume is divided into two parts: 1) “General Introduction,” and 2) “Works of Augustine.” The second and third volumes, then, cover “Individuals and Themes” (vol. 2: A–I, vol. 3: J–Z). As these latter two volumes will likely be of more general interest, my review will focus upon them; more specifically, I will discuss one representative entry – “Sacramental Theology” by Gary Macy – and this in an effort to give some sense of what the reader, specialist or not, might encounter and gain.

Macy begins by noting: “Aug.’s influence on sacramental theology in Western Christianity was pervasive but often indirect.”[p. 1680] And why was that? Because “few writers before the sixteenth century had access to the entire corpus of Aug. or even to single complete works.”[p. 1680] What’s more, most readers would have been unfamiliar with Augustine’s Neo-Platonic framework, reading him instead through an Aristotelian framework. That said, Macy notes: “This essay will highlight the way in which the most influential theological movements used passages from Aug. to shape their understanding of sacraments in general.”[p. 1680] The essay is divided into two post-Introduction sections: 1) Definition of Sacrament, and 2) Sacramental Efficacy. A final Evaluation in which Macy reiterates his main argument and briefly mentions modern sacramental theology follows these two sections.

Regarding the matter of definition, Macy comments: “Up through the eleventh century, sacramentum maintained a broad range of meanings with no fixed definition.”[p. 1680] Recall the recent review of David Brown’s essay in The Oxford Handbook of Theology and Modern European Thought. Macy mentions Isidore of Seville’s definition, but spends more time with Berengar of Tours from whom we get “the visible form of an invisible grace,” as well as “a sacrament [is] the sign of a sacred thing.” Neither of these definitions, however,  are direct quotations. The former is “at best a summary,” and latter a “transformation.”[p. 1681] The important point, is that these definitions were “a major shift away from a broader use of the term ‘sacrament’.”[p. 1681] And as Macy notes: “Theologians were aware of this wider usage, but were reluctant to oppose the authority of ‘Aug.'”[p. 1681] Macy then traces Augustine’s influence via Berengar through Hugh of St Victor and Peter Lombard. To summarize: “The definition of a sacrament derived from the quotations ascribed to Aug. during the aftermath of the Berengarian controversy remained the standard for Roman Catholicism and continues to influence traditional Roman Catholic theology down to the present day.”[pp. 1681-1682] While Anglicans were similarly influenced, the Reformers drew upon another quotation from Augustine, one emphasizing “the centrality of the word in Christian worship.”[p. 1682] Calvin, however, “repeated approvingly the definitions of Aug. as understood by the scholastics.”[p. 1682] Macy thus concludes that “the classic definitions of the sacraments … tended to rely on excerpts from Aug. or works attributed to Aug. rather than on a thorough analysis of his own thought.”[p. 1682]

Regarding the matter of efficacy, Macy suggests that Augustine’s influence was less indirect, more straightforward. Put simply: “Both good and bad might receive the body and blood of Christ, but only the just receive … the result of that reception.”[p. 1682] Luther and Calvin argued along similar lines, but differed from Rome on “the possibility of salvation without reception of the sacraments.”[p. 1683]

Macy gives a brief, but helpful, introduction to the reception of Augustine’s sacramental theology, one that might be drawn upon in the ongoing conversation of broad sacramentality. A perfect example of the contemporary relevance of these volumes. Highly recommended.

In one of his many essays on Milton, Northrop Frye defines the epic poem as a ‘special kind’ of narrative poem that does more…