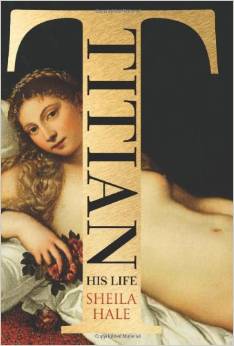 Sheila Hale begins the introduction of her tome on the life of Titian (Tiziano Vicellio, c.1488/90 – 1576) with the following quote from Edward Said: “Any style involves first of all the artist’s connection to his or her own time, or historical period, society, and antecedents: the aesthetic work, for all its irreducible individuality, is nevertheless a part – or, paradoxically, not a part – of the era in which it was produced and appeared”. [1]

This epigraph sets the theme of Hale’s work in two ways. Firstly, it grounds the attempt “to chart Titian’s stylistic development” across the century in which “he became the most famous artist in Europe” (xv). Yet it also points to the conclusion of Titian’s life wherein the artist’s final creative productions, most notably the Pietà (1575), may be seen not as the resolution of a lifelong craft but as exhibiting an unprecedented mastery which would lead to transcendent works of greater complexity and innovation.

Divided into five parts that cover Titian’s life from birth to death, Hale’s biography provides both historical analysis and aesthetic reflection spanning across the artist’s entire life and legacy. As such, we begin with Titian’s youth in the studio of Giovanni Bellini and examine early works such as The Three Ages of Man (1509) as well as his successful solicitation for work from both public and religious organisations. In his middle years he secured the patronage of personages such as Alfonso d’Este Duke of Ferrara, who commissioned Bacchus and Ariadne (1520-1523), as well as commissions to paint the portraits of Pope Paul III (1534-1549) and Charles V. In the later years of his life, Titian worked mainly for Phillip II, painting a series of commissions based upon Ovid’s poems.

Hale’s narrative of Titian’s life moves primarily from innovation to innovation. While acknowledging how some of his works display the ground-breaking use of colour and form for which he is known, Hale dispels the myth that all his works display such virtuosity. It would seem that even Titian created dull works to which he did not give his full attention. Of the many interesting anecdotes that disclose the character of Titian, Hale describes Titian as “an exemplar of the Renaissance ideal of sprezzatura.” that is, a master of concealment in regards to the amount of labour he would devote to each of his pieces. Nevertheless, Hale writes, “the false starts and the pentimenti – the changes of place while he worked on a painting…give us an idea of just how great the effort was” (134).

In each part Hale discusses the social, economic, and political circumstances in which Titian was working, often devoting entire chapters to particular historical contexts and personages. Though told with extraordinary detail and liveliness—and unfolding within the framework presented by Said’s epigraph—these accounts also expose the circumstantial nature of the historical documentation employed to create a sketch of the artist; and subsequently, the paucity of documentary traces left behind by Titian himself. Even so, the focus on Titian’s historical context provides evidence of Hale’s background in history and whose projects ranging from Renaissance Venice and The Civilization of Europe in the Renaissance reveal her adroitness for detail.

Yet it is the anecdotes of Titian’s behaviour that offer a glimpse of the artist’s personality. She tells of how offended Titian was when he discovered he was not included in Vasari’s Lives of the Most Excellent Italian Architects, Painters and Sculptors, which was devoted to deceased artists, excepting Michelangelo, and favoured Florentine artists and disegno line-based drawing. Though this omission was rectified in the second edition, Vasari’s aspersions on Titian’s drawing ability led the artist to circulate an advertisement of himself drawing when “at that time it was considered inappropriate to discuss or show the act of artistic creation” and which included a sonnet that announced Titian as “‘the wonder of the world, Because he transforms nature into art, Where we see in all his figures, Disegno and colore in flesh and bone’”(521).

In many ways, Hale’s biography of Titian carries resonances of Vasari’s artist biographies (including the one including Titian) which have exerted such a lasting influence on the structure of narratives of Western art history and painting. In this narrative of Titian’s life lie echoes of Vasari’s capacity to pull together various anecdotes and accounts of artistic influences, relationships and the circumstances of production of particular works in the form of artistic biography. And thus through excellent scholarship and historical framing Hale successfully produces a portrait of the artist as an artist of his time even if the artist as a man remains vague.