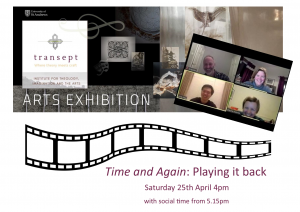 On Saturday, 25 April, 2020, over a dozen artists came together for a ‘Zoom-in Playback’ encounter moderated by Karen McClain Kiefer. This event was designed to follow the ‘Time and Again’ art exhibition. The dramatic performance was originally scheduled to close the Holy Week event by giving the participating artists an opportunity to share their experiences, but changes had to be made due to the COVID-19 lockdown. Playback Theatre per se is usually performed live since the presence of actors, conductor, and audience in the same physical space is regarded as essential. An online forum was devised to adhere to current restrictions regarding social gatherings and new nomenclature given. [1]

What is Playback Theatre?

Playback Theatre itself was founded by Jonathan Fox in 1975 in upstate New York and has since become a worldwide movement. Each local group takes cues from the concerns and needs of their immediate community in order to address social and educational issues, guide corporate training, support recovery from trauma and crisis, or entertain at community events and celebrations.

Playback Theatre’s format is simple enough: a space is created where personal stories, feelings, and memories offered by members of the audience are re-enacted by the actors. This dialogue between viewer and performer establishes a bridge of understanding and empathy. The emotional content of the narrative is drawn out by the artistry of the performer and then shared with the rest of the audience. The principal aim is to honour and affirm the person’s story within the community generated by the audience.

Founder Jonathan Fox defines the framework of what happens during a performance as ‘Narrative Reticulation’ (NR). As with the connectedness of veins on a leaf or the lines on one’s palms, there is an interrelationship between stories. Personal journeys interlace during the performance; each journey resonates with another, creating a link as well as another point of departure. Fox writes, ‘The sequence of stories, considered as a whole, will reveal important aspects of the identity of a community. If the NR is weak, on the other hand, then the connections will be shallow, the meanings thin’. [2] The purpose of Playback is to successfully create a space within which improvisational theatre establishes a healing environment for both actors and audience.

‘Time and Again: Playing it back’

So, at 16:00 on Saturday, 25 April, more than a dozen artists (including myself) joined a Zoom call from different time zones and nations. We had recently experienced Holy Week under lockdown in our various countries. We were living in a time none of us could have imagined, one that brought new fears and insecurities and triggered old ones. I think most of us in the audience were not sure what to expect from an online participatory theatrical performance. This performance was the concluding event of Transept’s ‘Time and Again’ art exhibition, which ran from 9-23 April and moved online in response to the coronavirus lockdown. Before the forced move online, the Playback performance was to have closed the exhibition and been followed by a celebration and closing reception. Instead, this Zoom performance was our celebration, and time for socialising was included at the end. We were a community finding its way into sacred space with the aid of technology.

As conductor, Karen McClain Kiefer set the stage, introduced the Playback actors (Andrew Gray, Davina Holmes, and Andy Yau), and gave us the opportunity to greet each other. Karen herself is a member of Playback Edinburgh and founded ‘Zoom-in Playback’ in response to the current time of distance, separation, and isolation. She is also a certified Playback Theatre Advanced Practitioner and is among the first to be certified as a Listening Hour Guide by Jonathan Fox. Karen explained that the conductor normally functions as the host, facilitator, and artistic director who manages the flow and ‘forms’ of a performance. In this situation, great shifts had to be made to adapt to an online stage and platform. We were not physically present with each other and interactions were thus limited. We were blessed by the advantage of accessibility from different geographical locations and time zones despite the drawbacks of a lack of live interaction. We were distant in time and space but present. I confess that I felt this added rather than took away from the magic of the whole evening. 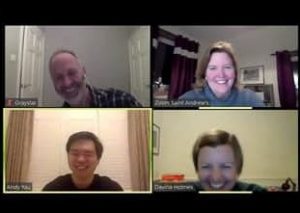 In a Playback performance, members of the audience participate as tellers of their own stories. Karen selected the first person and, after listening to how she was feeling about the lockdown and life in the age of COVID-19, asked the actors to perform in a certain manner to express this story in movement and facial expressions. Andy, Davina, and Andrew took turns due to the limitations of the Zoom platform. The actors had to shift into the equivalent of a filmed performance rather than a staged one. I was impressed by Andy’s body language and his wide range of facial expressions. Andrew, on the other hand, moved like a dancer for this performance, contorting his body but remaining rather facially impassive. Davina, in contrast, used her full-on facial expressions close to the camera. At one point she removed herself completely from the screen before coming into the frame bit by bit—first a finger, then a hand. She went back out and returned again and again, like someone drowning who rises to the surface a few times before sinking completely.

Karen moved us on to the next story, to be played back with yet another approach. In many ways I felt the whole performance was a demonstration of theatrical techniques, a workshop to introduce the audience to all that Playback can be in spite of the limitations imposed by an online venue. We had a musical interlude kindly provided by a harpist in our midst and then carried on with the next story.

This was my first experience of Playback Theatre. I came to it fresh from an exhibition in which my three-dimensional artwork was forced to be exhibited on a screen for Transept’s ‘Time and Again’. The colours ended up being modified by pixels and the tactile materials were flattened. Experience and emotion were skewed by technology and hanging above it all was the invisible threat of the pandemic. In this dramatic performance, I believe the struggle continued. We were all there to see if this could be done and if it would look and feel right. It was a tough learning curve for performers and audience alike, I dare say. Even so, as we attempt to imagine a different future, a ‘new normal’, we ask ourselves if it will still be possible to make art and to present it in person. Both the online art exhibition and the Playback Theatre performance hosted by Karen confirm the resilience of artists and our adaptability to change.

[1] A Playback Theatre performance forced to use an online platform loses some critical aspects of its very nature. However, those same constraints ended up providing opportunities for an innovative and unique engagement. The organisers decided to omit the term ‘Theatre’ in describing the modified event and chose ‘Zoom-in Playback’ instead since the experience differed as much as viewing a film differs from attending a theatrical performance.

Kieran Gaya is currently pursuing a doctoral degree in Art History at University College, Dublin. He looks at how religious imagery is steeped into the visual design of capital cities to shape national identities. He was born in Dublin, Ireland of Mauritian parents and spent his formative years in Asia and Africa as well as Europe. This diversity of cultures, languages, and socio-cultural contexts is the seasoning to his interests as well as artistic pursuits.

In Part II, I consider those who identify the image of God with creativity as an aspect of the human being. What are the ethical implications of comparing divine and artistic creativity from this perspective?