Editor’s note: In Part 1 of this review, Kieran Gaya reviews the visual and literary component of Transept’s ‘Time and Again’ exhibition. In Part 2, he will review Karen McClain Kiefer’s ‘Time and Again: Playing it Back’ Playback Theatre performance on Zoom on 25 April, 2020.

‘Time and Again’ was a multidisciplinary arts exhibition created by students and artists associated with Transept, the student-led artists’ group within the Institute for Theology, Imagination and the Arts at the University of St Andrews. The twin themes of time and cyclical time were explored from a variety of perspectives, some through the lens of faith, and subsequently expressed in as many mediums as the participating artists saw fit.

When the exhibition’s call to artists went out in December 2019, no one had any idea that the COVID-19 pandemic was going to hit the world. They little suspected that time itself would go into a series of freeze-frames, pauses, default modes, and an overhauling disk restore to our life systems of adaptation. The exhibition was originally planned for display at Saint Andrew’s Episcopal Church in St Andrews from 3-8 April, 2020. The organisers had to hastily decide whether to cancel everything or adapt to the enforced lockdown by choosing a digitally accessible venue. The result was an Event on Transept’s Facebook Page with new artwork added daily from 9-23 April. The idea was two-fold. First, this format would allow a wider audience to view the art pieces at leisure and in complete safety. The second was a means of connection during this time of physical isolation: a new community was devised for artist participants as well as for visitors to the exhibition.

Gabriel Garcia Marquez wrote the novel Love in the Time of Cholera; the ‘Time and Again’ artists contributed to Art in the Midst of a World-Wide Pandemic. The arts, whether visual, performing, musical or otherwise, resonate with our senses via our imaginations and intellect. A work of art takes root, enters our frame of mind, and is fleshed out in our reactions, whether we admire it or not. The spiritual implications of art can be similar to Advent, with words taking on flesh through the choices made by a creator. Without any need for protective gear or face masks, let us proceed with our virtual visit. Let the artists speak to us through voices, heard or implied, and lead us to contemplation. This is virtual reality at its best.

Liz Crichton’s pieces, as laid out in her artist’s statement, explore hopes and fears which may result in each individual’s personal journey shaping his or her very sense of self. She mentions that her work is made to contrast with the power of natural elements, with the fragility and temporal quality of life itself. She aims to inspire others to step out from the pragmatic into an exploration of the magnificence of the unknown via their imaginations. Her ‘Time Capsule’ is a sculpture of clocks and found objects, put together in an attempt to capture a fleeting moment in time. It is interesting to note that some of the clocks have stopped working and are thus frozen into a specific era while others continue to beat towards an uncertain future when they too will stop for one reason or another.

Karen McClain Kiefer is a narrative artist who uses theatrical space to explore spiritual definitions. Her installation piece ‘Khora for this Holy Saturday’ invites the visitor to enter into a sacred space, empty of death and yet redolent of an invisible divine presence. This presence enters physicality through the indwelling of a visitor entering the space. She asks, ‘Tomb or Womb?’ In addition, Karen McClain Kiefer created the Facebook Page ‘For Such a Time as This’ (Esther 4:14), which engages with the exhibit’s theme of cyclical time by creating a virtual space where people can share their responses to this unprecedented time. 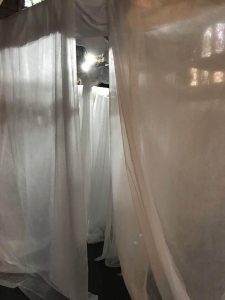 Jean Lamb’s professional life as an associate priest impacts the visual art she produces in the manner of a concrete spiritual space. Her piece ‘Station of the Holocaust IV’ connects the narrative of the persecution, torture, and murder of a Jew in the figure of Jesus, to the suffering of the Jewish people during the Shoah and pogroms of Europe. It is a powerful piece to observe, and the pathos on Mary’s face as she reaches out to her son is mirrored in the faces of the other mothers here represented. 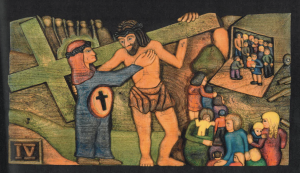 Daniel Drage brings his hands-on creative touch to his very tactile pieces which make one want to experience them more than just visually. They create a yearning to see all sides, to hold and feel. His tea-and-coffee-stained wood piece, ‘Tea and Coffee Rings with Vesica Pisces’ is fresh and fun while still connecting to the themes at hand. Mugs carelessly placed on wood, left there for some time, and then taken away left indelible marks like age rings on a tree. The seventh and eighth rings connect into a vesica pisces shape, a wrinkle in time, a specific moment of history leaving its mark upon eternity, chalice and ichthys in one.

Architect Laurentiu Tiberiu Stancu is another artist whose work is inspired by his professional practice. His three-dimensional sketches of houses show the process from conceptual designs to plans. They take us on a journey where these constructive elements show the passing of time and the ephemeral aspect of ideas becoming concretised. Each house begins as ruins of a sort, then becomes a shadow before ending up just a memory. The drawings for House XIII allow us to imagine the space and enter it as a paper doll into a miniature house of dreams. Stancu shares that his work attempts to find the theological grounds of architecture. 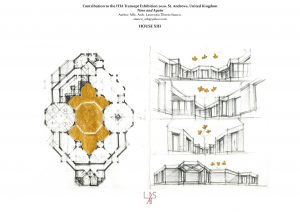 Letizia Morley, meanwhile, is an artist who uses words in the form of illuminated calligraphy, as well as in hand-drawn graphic novel-style comics, to express spiritual journeys in the context of our daily lives. The illuminated calligraphy pieces succeed in elevating daily words into sacred spaces, similar to how proverbs inherited from familial wisdom become ensconced in holy texts. 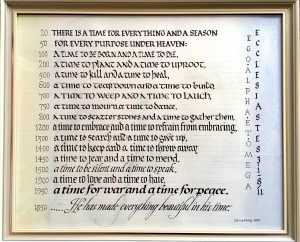 ‘There Is a Time for Everything’, Letizia Morley

Julia MacLaurin mentions that she is interested in energy and aliveness, trees and nature. Her recent pieces deal with the earth, disintegration, and renewal. Her two iterations on the theme of seeds, using paper that had been buried under the earth, delve into nature’s cycles of demise paving the way for regeneration. This idea connects with the truths of Easter as well as with our own mortality and infinity. 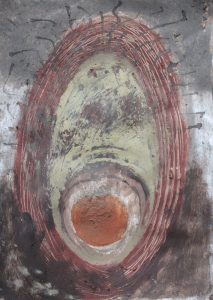 Rebecca Howard’s fascination with the contemplative life she observed at Malling Abbey resulted in ‘The Canonical Hours’, a study of the prayer cycles connected to the hours of the day. Aspects of constant repetition within a cycle of time are evident in her use of the same figure in the same pose with only the colours and the subtitle changed. Her book of woodcuts entitled ‘Prayers in Stones’ is a pared down, visual record, reminiscent of medieval psalters.

Liesel Rios’s pieces express the creative energy which had lain dormant over the last eleven years of raising four children. Her delightful ‘Nighttime Ninja’ is a linoleum print combined with a poem inviting the viewer to share that sense of wonder one feels in observing someone sleeping. Her format emulates children’s books where one lifts a flap to see the ‘rest of the story’. 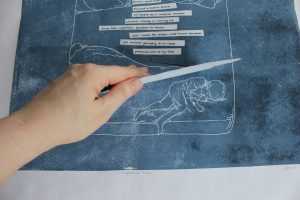 Daniel Rattelle is a poet and arts journalist. His three poems fill the space around us with imagery-soaked words when read out loud. Cycles of time, the mundanity of daily life, and celebratory events all go into the mix. One poem in particular transported me:

Each day when new light gets past the shade, and I gaze
Out at the yard, and fumble for my glasses
(The grass still wet from rain) I recall the phrase
I heard somewhere: Good is that which passes.

Next, David McCulloch’s sculpted marble relief ‘Image Coming Soon’ comes from several sources of inspiration. The word ‘soon’ does not say how long one has to wait before seeing the missing image. The statement itself is given concrete form in marble, thus there is no more waiting for an image to be revealed. He also mentions that Jesus is called the Word of God as well as (as are we) the Imago Dei, the image of God, the visible representation of an invisible God. 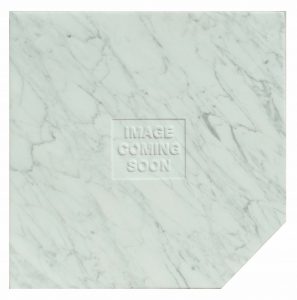 Finally, Kieran Gaya also shared his work. When he considered the cyclical aspect of the theme, he decided to use old pieces of fabric that had travelled with him: cutting them up proved rather cathartic! The individual items of clothing died to their previous life and were resurrected in a new form as the tapestry ‘Giro Giro Tondo…Casca il Mondo’. In some ways his piece resonates with Karen McClain Kiefer’s as it moves from shroud to cocoon. As a third-culture person, this lockdown and curtail to travel has made him feel trapped. His ‘Tondo’ tapestry references time, global connections, and becomes a launching pad to the next leg of the journey. 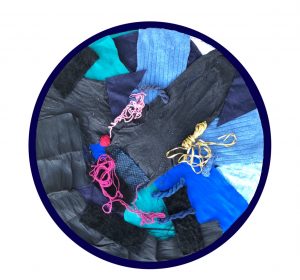 As we deal with the invisible threat of the COVID-19 virus, these art pieces expressed in an unexpected context speak of another invisible and yet hopeful reality. The invisible divine presence became flesh and dwells amongst us. We celebrate the impact of an eternally loving God upon time itself.