Marjorie Hewitt Suchocki’s ambitious book, Through a Lens Darkly: Tracing Redemption in Film, begins hypothesizing that it could be beneficial to examine how certain directors rectify conflict throughout their oeuvre. The premise of this book is hardly surprising considering her interests as a theologian:  the problems of sin, evil, and redemption, particularly within process theology. By following the conscious (or subconscious) evolution of how directors consider issues such as violence, existential questions, greed, and love, she aims to trace a path which she argues can be theologically beneficial for the religiously inclined viewer. 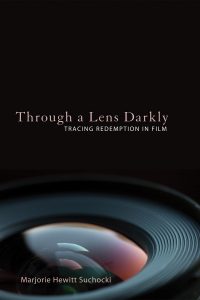 In the first chapter, Suchocki highlights a consistent concern with varying responses to violence within the films of Clint Eastwood. Whereas Unforgiven (1992) and Mystic River (2002) abjure violence—ostensibly in all its forms, but specifically vigilante violence—his later films offer up a slightly nuanced development in the form of self-sacrificial love. Death mercifully given, as in Million Dollar Baby (2004), or voluntarily accepted, as in Gran Torino (2009), is described as ‘a violent response to violence’ (1). Suchocki explains this self-sacrifice as being an inherently Christian response to violence, since this love is given based on ‘life, not  death’ (15). With Hereafter (2010), she concludes that Eastwood suggests the intentionally ambiguous notion that love might persist even beyond death.

The chosen films of Woody Allen are split into three different categories according to their focus on meaning, morality, and mortality. Annie Hall (1977) and The Purple Rose of Cairo (1984) seem to actualize the Existentialist world where meaning is created as opposed to intrinsically given. In the former, Allen presents storytelling as a vehicle which might add meaning to one’s life. This is contrasted in the latter which projects a ‘tender but bleak picture’: fantasy and illusion does not, in actuality, add meaning, but instead generates an escape from the inherent meaninglessness of life.

The later Allen focuses on morality in Hannah and Her Sisters (1986), Crimes and Misdemeanors (1989), and Matchpoint (2005). Throughout, one observes a descent from characters who wrestle with a guilty conscience—the result of infidelity and murder—into an amoral world which declares that if God does not exist then all things are permitted—something both Allen and Suchocki derive from Ivan’s dictum from Dostoevsky’s The Brothers Karamazov.

Lastly, Suchocki looks at Allen’s more recent films, You Will Meet a Tall Dark Stranger (2010) and Midnight in Paris (2011) which appear more optimistic, providing possible resolution to the questions plaguing Allen. In the end, whatever route is decided upon, Allen’s films seem to at least invite the viewer to ‘appreciate that one is, after all, alive to ask the questions’ (33).

Through examining the films of Spike Lee, Suchocki pinpoints his meditation upon how one may respond to racism and violence that are prevalent in the contemporary world. In Do the Right Thing (1989) no specific ‘right answer’ seems to be given. Instead, an ambiguous middle ground is intimated, forcing the viewer to consider exactly what the ‘right thing’ might be. In Malcolm X (1992), Lee picks up where he left off in the biopic of the revolutionary, which perhaps elevates community as a ‘means of transforming violence’ (42). 25th Hour (2002) differs slightly, in that it focuses on a white man’s last day before serving a seven-year prison sentence, but ultimately demonstrates that redemption can be found through the lucid acceptance of the consequences of one’s mistakes. The chapter concludes with a discussion of Red Hook Summer (2012) which is used by the author to support the theory that perhaps, for Lee, redemption can only be found in community and its ability to redeem violence.

Suchocki moves to the weighty and darkly comic films of Joel and Ethan Coen. With Fargo (1996), she posits that, though rife with inexorable evil, one might see the decency and kindness of Marge and Norm as a resolution to the pervasive violence in the film. Additionally, in O Brother, Where Art Thou? (2000), we find a turn towards laughter, comedy, and music as a way of transforming the tragedy and suffering of life. However, this apparent attempt to resolve evil and suffering seems to come to a halt in the Coen brothers’ later films No Country For Old Men (2007) and A Serious Man (2009). In the first, we find evil to be a powerful force too strong for ‘decency’ to handle, as Sheriff Bell retires after Chiguhr absconds with the money. In the second, we find a depiction of the unintelligible absurdity of life where things just ‘seem to happen’ and life appears devoid of meaning and justice—Suchocki describes it as the Old Testament book of Job without its conclusion (65). However, a partial resolution for the films of Joel and Ethan Coen might be found, she argues, in True Grit (2010), when Mattie secures justice for the murder of her father, but is saved by grace. And perhaps, this ‘partial resolution’ is enough.

Compared to the theoretically oriented films discussed, one finds the films of John Sayles instead highlighting socio-political issues. In devoting attention to problems such as economic and political corruption, the director suppresses a sense of resolution in order to impress demands upon the viewer to act. Matewan (1987) opens up the possibility of nonviolence; Men With Guns (1997) calls for the viewer to be aware of violence and the ways to counteract it; and Silver City (2004) ends despairing at the success of corruption. Despite this, Suchocki notes that this film is ‘a passionate call for citizens to wake up to the political corruption that has overtaken us, and to use the power of the vote to address it’ (85). Finally, by focusing on America’s occupation of the Philippines at the beginning of the 20th century, Amigo (2010) implicitly compares this injustice with modern military and political practices.

The last group of films Suchocki addresses are the ‘love stories’ of Ang Lee. Beginning with The Ice Storm (1997), Lee examines modern relationships. Here she finds a resolution in the viewer’s ‘recognition of the full relationality of existence’ (94). In Crouching Tiger, Hidden Dragon (2000) we find Lee leaning towards beauty within a violent and sexual world. However, as in the later Brokeback Mountain (2005), one finds the individual’s willingness to revolt against social conventions ineffective when confronted with the conventions themselves. Despite this, in The Life of Pi (2012), we conceivably find a more optimistic resolution to life’s difficulties. Gratitude is found as a redemptive response towards suffering and through this gratitude a love for life (perhaps even a love for God) can be obtained.

Suchocki’s book concludes with a brief epilogue focusing mainly on Terrence Malick’s masterpiece, The Tree of Life (2011). Like A Serious Man, Malick’s film is loosely based on the Biblical book of Job. Here however, instead of focusing on absurdity, Suchocki focuses on Malick’s dichotomy between nature and grace. Absorbed in ambiguity, instead of prescribing theodicy, The Tree of Life places human experience within its proper, cosmic context: ‘Our small stories echo and contribute to the larger story, and that story is magnificent’ (115).

Considering her background in theology (perhaps most notably as a leader in the field of process theology) and the founding director of the Whitehead International Film Festival, one can imagine what Suchocki’s book could be.

For those looking for an in-depth, scholarly analysis regarding the development of resolution within a filmmaker’s oeuvre, Through a Lens Darkly certainly falls short. By attempting to tackle seven different directors and 30 films in its comparatively brief 117 pages, the author limits herself to providing caption-length statements of morals present in these decidedly complicated films. However, Suchocki perhaps succeeds in an admirable, albeit brief account of the ways in which these (for the most part) well-known films wrestle with theological issues, and provide ample evidence for the fact that the moral and existential questions posed here are prominent and persistent in their haunting of modern life.