Editor’s Note: This is the third and final part of a three-part review. To read the entire series, please see parts one and two.

This final glimpse into Theology, Aesthetics, and Culture will address the perceptive response of Trevor Hart, co-founder of the Institute for Theology, Imagination and the Arts, to David Brown’s 2008 volume God and Mystery in Words: Experience through Metaphor and Drama before fittingly giving Brown himself the final word. [1] 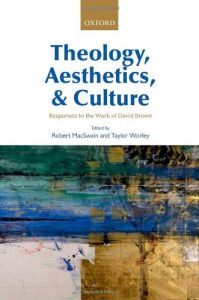 Trevor Hart offers a clear and insightful essay to this already excellent collection of responses to Brown’s five OUP volumes. Titled ‘Lectio Divina?’ (ch. 17), Hart’s primary concern is Brown’s treatment of the “‘sacramental’ power of the poetic image to draw us—through a sustained dialectic of mystery and meaning—into an encounter with the God who lies at the heart and the root of all creaturely mystery and meaning” (226). Hart does well to frame our uniquely human predicament in sacramental terms: “our distinctive creaturely circumstance is one straddling the spheres of the material and the non-material, holding them together and mediating the realities of the one to and through the forms of the other.” Moreover, Hart thinks the sacramental nature of our existence as creatures “assumes particular significance and gains far deeper resonance when situated adjacent to Christian faith’s most fundamental and distinctive claim—namely that God’s own Word addressed to humankind is never a logos asarkos, but from first to last an enfleshed word” (227).

Hart wishes to ground any sacramental understanding of humanity or poetics in the reality of the Incarnation, thinking this “reinforces precisely the sorts of points Brown himself wishes to make and to urge upon Christian readers in particular” (238–39). In Hart’s view, however, Brown “makes surprisingly little” of the Incarnation, “preferring to rely instead on the category of sacrament to provide his theological ballast” (239).  A more distinctively Christian account of “a wider poetics” would, Hart suggests, be “founded decisively on the contingencies of divine sign-giving in the incarnation” (239). Though the ambiguity of such an incarnational foundation is perhaps a weakness throughout Brown’s project, I agree that “Christian theology may have much to learn about all manner of things from wider and more general discourses” (236). As Christian theology moves into greater conversation with poetics it can only be strengthened in affirming that,

the poet’s play with words, by drawing us into a sense of the world’s residual mystery draws us more fully too into that “larger mystery” of which it is part, the same “inexhaustible presence” who was in the beginning with God and was God (234).

After listening patiently to 19 chapters critiquing the last decade of his life’s work, David Brown is finally given the chance to respond to his respondents. The insightful depth and clarity of Brown’s response is justification enough to pick up this book. Admitting that he is not attempting to “conclude” the “conversation” with his work, but merely “continue” it, Brown avails himself of the opportunity to “explore some issues that were dealt with only tangentially in the books themselves” as well as “disclose some objections” he “thought were going to be raised” by his critics “but in fact were not” (265). 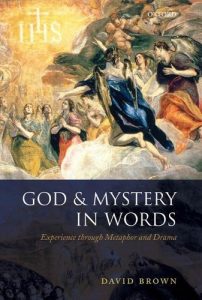 After addressing his “own disquiet with current approaches to both natural and revealed theology,” Brown proceeds in four stages: “examining first experience of God in the natural world, second through culture, third as mediated in and through biblical revelation, and finally as found in human embodiment and Christ’s incarnation” (266). In proceeding as he does Brown’s response to many of the contributors emerges “less directly,” but this clarification of his views has the advantage of creating a more coherent response that can be read on its own as opposed to a piecemeal reply to each of his critics. Indeed, these pages provide a helpful introduction and clarification to many of the most important themes and theological commitments which occupy his five books under discussion.

Even so, Brown takes time to defend his preference of “sacrament” by arguing it is a “more neutral term and so can more easily be used in dialogue with those of another or no religion,” and “secondly, to my mind incarnation suggests a more resolved way of reading the world that admits less easily of the conflicts inherent in so much religious experience” (274). Thus we can see that it is Brown’s desire for a less-resolved and more open-ended dialogue about religious experience, especially with those outside of the church, that motivates his choice of language with which he frames his entire project.

In addressing more directly the acute concern over a lack of criteria in Brown’s work, a criticism that will be addressed more fully in Brown’s upcoming volume, he explains that “part of my aim in writing my volumes was to challenge conventional distinctions between sacred and secular,” and whereas “the tendency of so many systematic theologians and philosophers to think of such criteria operating trans-historically…on my view they only find their raison d’être in specific historical contexts” (289).

Astonishingly broad while remaining erudite, Brown’s work over the past decade has been one of the clearest and most comprehensive efforts in the laudable and vital “search for a proper balance of theological stability from scripture and tradition and an eager and growing appreciation for the cultural shifts and artistic movements in our world” (304), as Taylor Worley observes in the postscript. It can only be hoped that this volume of responses will continue to deepen and advance the conversation over the next decade and beyond.