Gisela Kreglinger’s The Spirituality of Wine is as rife with careful research as it is with food for thought.[1] The book’s main claim can be (albeit unjustly) boiled down to the notion that a well-crafted expressive wine is a vehicle whereby the Christian can begin to understand herself in relation to God and the entirety of His creation. Provided that the Christian approaches the wine contemplatively.[2] This thesis is supported not only through ample evidence from Christian teaching- perhaps most strikingly through evoking the powerful symbolism and historical significance of the Eucharist.[3] Kreglinger also draws evidence from her many interviews with various vintners who have developed a deep (dare I say it?) mystical connection with creation through the caring of their vines as well as from her own experience growing up on a vineyard in Franconia.[4] Whilst Kreglinger gears her arguments towards Christianity, I shall presently argue that The Spirituality of Wine bears important lessons for non-Christians.

Kreglinger’s book at once calls us to be awe-struck with the mundane and to be humbled. It reminds us that we are creatures of the earth and of the possibility of a profoundly meaningful life within this earth. As a wine connoisseur and moral philosopher (broadly construed), and very decidedly neither a Christian nor theologian, I deem this to be of the utmost importance if we are ever to stake a guess as to what it means to be human. This has significant moral implications, especially when answering Socrates’s age-old question about how we, as human beings, ought to go about leading the good life. A question which concerns all humans, incidentally. 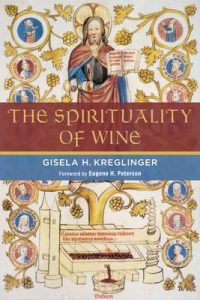 Many of you might wonder how Kreglinger’s book provides us with insight to these questions. In order to attempt to give an answer, it is important to return to Kreglinger’s humbling and awe-inspiring reminder that we are creatures of the earth. Human moral psychology has been divided into rational faculties and the passions, or impulses. This conception goes at least as far back as Plato.[5] Most moral philosophy since Kant has deemed that to lead the morally good life is to lead a life guided by reason rather than by the passions.[6] The good life on this sort of conception is removed from our bodily needs and imagined as an ethereal, transcendental endeavour. To view the dichotomy in this manner is dangerous because it may lead us to do ethics for disembodied beings rather than for human beings. An ethics construed in this manner necessarily forces us to ignore our needs as living beings as well as the needs of all other living beings who share our complex biosphere. Kreglinger invites us to re-engage with this aspect of human life.[7]

As Kreglinger points out in a rather more theological framework than the one I have employed, this elevation of human reason or the non-physical aspect of human existence over the bodily can make us lose sight of what actually matters to us as human beings. Most dangerously, it has allowed modern society to put forth the following axiom: the most rational thing to do (and, purportedly, the best thing to do) is the most efficient thing to do.[8] Through her exploration of what constitutes good winemaking, Kreglinger provides us with a sobering illustration of the inadequacy of this standard if the meaningfully fulfilling human experience is to be possible. She reminds us that when the vintner’s ultimate goal is to maximise utility in the vineyard, his end product is vacuous.[9] Wine produced in this manner is vacuous because all links between the end-product and its origins are erased, and it thus loses all its evocative power. Moreover, this perpetuates modern allegations about the good life which keeps the rational separate from the bodily. Leading us to live the typically modern life which Kreglinger characterises as fragmentary throughout her book. This impedes us from leading that good life which has always been rooted in questions about human morality.

So far, I have been underplaying the significance of wine in Kreglinger’s work. Here, wine is more than a vehicle for a metaphor about how man should lead his life. It is itself an important element of life as it should be led by man. A claim deeply embedded in what I have labelled the book’s central thesis is the idea that to drink wine is to pray.[10] But what exactly is the non-Christian to make of this? For Kreglinger, to drink wine prayerfully is to drink it in such a way that one allows the information gathered by our senses to remind us of the earth from whence the wine came, the structural nuances thereof, and, most importantly, to be in awe of the fact that the mundane can remind us of the mysteries surrounding the miracle of life in all its diverse forms.[11] To drink wine in this manner is a veritable aesthetic experience in Schopenhauer’s sense of the term.[12] It momentarily allows us to transcend the reality of human suffering in order to remind us of the stuff of life. Moreover, on this account, drinking wine in the right sort of way fosters sharing and living in communion with other human beings. This is significant not only in the Christian context of the Eucharist, but also because meaningful relationships with human beings seem important for the human good life, given our social nature. Kreglinger also sees wine as a reminder that to lead a meaningfully fulfilling life is not to deprive oneself of earthly joy.[13] The life unexamined is not worth living, but surely neither is the joyless life.

Reading The Spirituality of Wine proves fruitful to the non-Christian non-theologian because Kreglinger succeeds in showing that wine, in a manner much like Proust’s madeleine, evokes the significant aspects of the meaningfully fulfilling human life. If this were not enough, it is beautifully and clearly written. And, more to the point, it is highly informative on the history of Western practices surrounding wine and wine-making today. All in all, it is an insightful read for anyone interested in wine and in the human pursuit of the meaningfully fulfilling life.