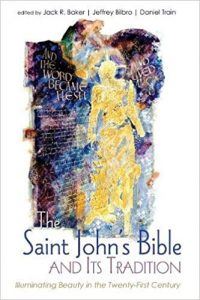 The creation of The Saint John’s Bible was a remarkable project which has already generated a wide range of responses, yet this collection of essays still offers new, valuable insights into the importance of this unique Bible. ‘The Saint John’s Bible’ and Its Tradition shows how a handwritten, illuminated book, inspired by practices dating back several centuries, can be ‘a Bible for the twenty-first century’ (p. 1). The aim of the collection is to draw out the ‘redemptive, prayerful power’ of The Saint John’s Bible (p. 3), and in doing so to recover a sense of the transformative, persuasive beauty of Scripture and its relevance to contemporary Western society.

Several of the essays suggest that The Saint John’s Bible challenges us to rediscover a patient, attentive way of reading which we may have lost amid the ‘restless’ digital age of ‘incessant distraction’ (pp. 46-7). Matthew Moser argues its resplendent illuminations can help cultivate a ‘humble receptivity’ that will draw readers into the text, allowing it to act upon them (pp. 33-4). At a time when casually scrolling through e-books and screens is becoming the norm, the weighty physicality, ornate calligraphy, and stunning imagery of The Saint John’s Bible are presented as an invitation to ‘slow down’ (p. 50) and sink into the depths of meaning the biblical text contains.

The structure of this collection appears designed to guide the reader through this journey into the text. The first three essays provide the theological and historical scene-setting which draw the reader into The Saint John’s Bible, describing the theological potency of its beauty, and suggest how we might reconsider our approach to reading in response to this. The following three essays give the reader an opportunity to reflect on the intricate details of the text and illuminations: its playful marginalia, ornate calligraphy, and the enigmatic qualities of its imagery. [Figure 1] The final contributions turn to The Saint John’s Bible’s capacity to speak to contemporary society, encouraging readers to consider how a slow, patient appraisal of this Bible might lead them to rethink their relationship to the world they inhabit. 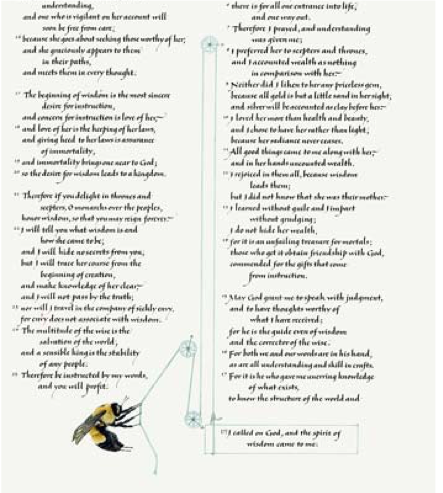 The dominant, unifying theme in ‘The Saint John’s Bible’ and Its Tradition is beauty and its relationship to the words of Scripture. The Saint John’s Bible is described as a reminder that ‘beauty and holiness in the Bible are inseparably linked’ (p. 14). From this perspective, the human artistry displayed in The Saint John’s Bible is an appropriate way of praising God (p. 11), as our notion of what is ‘beautiful’ comes directly from Scripture. Both David Lyle Jeffrey and Moser suggest that beauty should be understood in the light of ‘the glory of crucified love’ (p. 30), as Christ on the Cross affords ‘an image of transcendent Beauty itself’ (p. 23). [Figure 2] This theology of beauty is crucial for understanding the way these essays approach ‘the inextricable interplay between word and image’ found in The Saint John’s Bible (p. 113). As Daniel Train observes, it establishes Christ as the ‘Word-image’ which binds the sacred and eternal to the material and transient, enabling Holy Scripture and man-made art to co-exist as mutually enriching participants in the praise of ‘Beauty itself’ (p. 112). 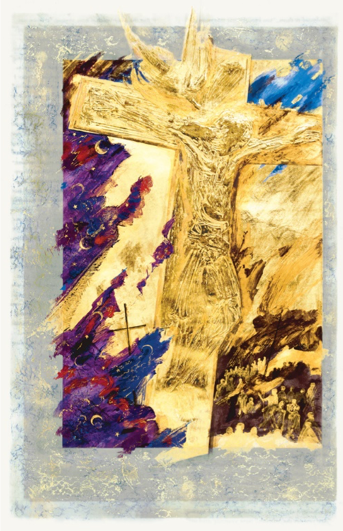 The way these essays collectively sustain and develop this theology is impressive and lends coherence and consistency to the collection’s treatment of The Saint John’s Bible. Whilst, in other contexts, a theological aesthetics tied so tightly to a particular reading of the Cross and Incarnation might cause difficulties, it seems appropriate here, and it provides a helpful degree of theological focus.

Another primary concern in ‘The Saint John’s Bible’ and Its Tradition which emerges from its theology of beauty is The Saint John’s Bible’s use of calligraphy and visual art to recover the transformative, persuasive power of Scripture. Jeffrey Bilbro argues that using illuminations to draw attention to ‘the intrinsic beauty of God’s revelatory address’ makes this call ‘more palpable and real’, inviting the reader to ‘re-arrange their sense of self’ in response to this address (p. 127). Sue Sorensen also suggests many of The Saint John’s Bible illuminations complement the biblical text by revealing ‘how radical Christ’s welcome can be’ (p. 101). She argues that the depictions of Christ in illuminations such as Donald Jackson’s Resurrection and The Word Made Flesh frontispiece remind us that this welcome can be enigmatic and ‘ambiguous’ (p. 100). Because they are ‘beautifully but appropriately disconcerting’, Sorensen believes these images can prepare the reader for a ‘highly personal’ encounter with ‘the unsettling beauty of an off-center Saviour’ (pp. 101-2).

Most of the essays choose not to confront the possibility that this relation between text and form is not always harmonious, or that beauty might distract from, rather than enhance, semantic meaning. However, as Train notes, The Saint John’s Bible provides excellent examples of an interplay between beauty and ‘legibility’ that challenge assumptions we might be tempted to make about the irreconcilability of words and abstract forms (p. 108).

This sense of challenge is also present in the various ways in which ‘The Saint John’s Bible’ and Its Tradition talks about the relation of this Bible to modern Western society. Paul N. Anderson believes The Saint John’s Bible can fulfil a ‘prophetic function’ because the striking presence of modern symbols within its imagery, such as the Twin Towers, [Figure 3] brings the social concerns of the biblical texts into conversation with ‘twenty-first century issues’ (p. 136). Bilbro also gives The Saint John’s Bible a prophetic voice, which speaks against the ‘crass commercialism’ and ‘consumerist temptations’ of contemporary culture (p. 123). 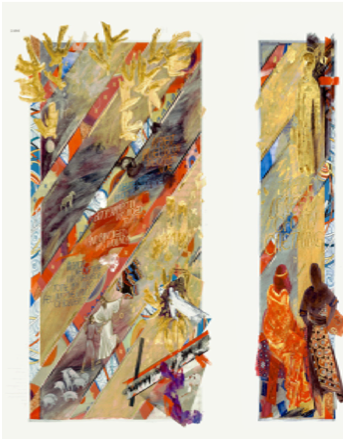 What is refreshing, however, is that the dialogue set up between tradition and modernity is not only about challenge or conflict. Anderson notes that details such as the inclusion of a DNA helix and starscapes reminiscent of images taken by the Hubble telescope remind the reader that the Spirit ‘can speak the language of our modern technologies’ (p. 131). [Figure 4] If some of the essays occasionally slip into a more polemical dismissal of the digital world of screen-fed ‘narcissism’ (p. 125) and ‘captioned cat photos’ (p. 46), the collection largely stays true to its aim of avoiding ‘naïve nostalgia or technophobia’ (p. 2). 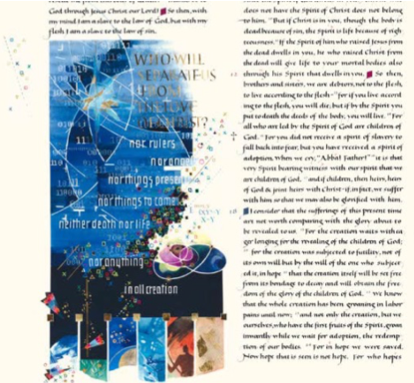 This allows for a series of fascinating, thought-provoking observations about how The Saint John’s Bible might bridge the gap between the time of handwritten, illuminated Bibles and a screen-based culture of scrolling and swiping. The result is a set of essays which constitute a fitting tribute to a Bible suffused with a rich beauty that has the power to include, persuade, and transform a contemporary reader.

[3] Figure 3. Luke Anthology, with the Twin Towers depicted in the middle in the illumination of the anthology in Luke. Donald Jackson with contributions from Aid­an Hart and Sally Mae Joseph, 2002. Courtesy of The Saint John’s Bible and the Hill Museum & Manuscript Library, Order of Saint Benedict, Collegeville, Minnesota.