With refreshingly lucid prose and a creative handling of diverse sources, Philip Tallon culls the best insights of theological aesthetics and applies them to the question of theodicy. [1] He contends that the revelation of God as a crucified Jew, an event of sheer horror and abandonment, reorders human perception of values such as reason, gratuitous violence, and the good. Analogously, human suffering experienced through voices found in masterworks like the poems of Gerard Manley Hopkins and the tragedy of Oedipus rex make possible the perception of overarching narratives of redemption in the midst of subjective human suffering.

Essential to Tallon’s argument is Eleonore Stump’s emphasis on the possibility that evil can produce aesthetic goods. Chapter 1 integrates her contribution as a corrective to John Hick’s critique of aesthetic theodicy as subpersonal, both à la Augustine (apologia for a distant artist) and Irenaeus (process theology). Stump’s account of Job, a second-person narrative, introduces a fundamentally more nuanced plane of value than propositional claims made in the third-person. 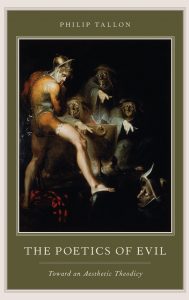 Chapter 2 investigates the historical bifurcation of the ethical and the aesthetic capitalized by Hick, locating the parting of ways, of course, in Kant’s Critique of Judgment. His banishing of taste from the sphere of cognitive judgment is difficult to reconcile with a Christian aesthetic, which maintains the unity of content and form. Rather, the cross is the locus for the perception of providence, happily corroborated by the adduction of Dorothy L Sayers and Hans Urs von Balthasar, with Gadamer as a kind of aesthetic apologist. Tallon moves to assess Augustine’s seminal contribution (Chapter 3), which cast theodicy in the guild of perceiving God’s providence amidst the consequences of sin, and not necessarily, to borrow a phrase, to “justify the ways of God to men.”

Tallon deftly handles Hick’s objections—perhaps the most lucid of modern critics after Adolf von Harnack—to the “aesthetic theme,” which Hick sees as a kind of violent totality against the capacity for human relationship (126). Tallon obviates the alleged contradiction through an innovative theological exploration of the genre of tragedy (Chapter 4).

Only a robust tragic theology, or “vision,” can handle the fragile contours of human life and escape the pitfalls of a Nietzschean nihilism or the one dimensional compression of evil under the banner of felix culpa, which Wendy Farley argues is the bane of classical theodicy (150). Yet for Tallon, Farley’s riposte of internal hope lacks transcendent value, rendering her conception of tragic theology tautological. In his book, The Beauty of the Infinite, David Bentley Hart pursues a different avenue: tout court, in which tragic theodocists err precisely in ascribing value to suffering (162-3). Tallon disagrees, and Chapter 5 fleshes out his argument.

According to the author, Christian theology must bestow upon the experience of evil some kind of positive meaning (163; 170). It is admitted that in the face of disruptive and unreasonable horrors the tragic vision seems to be more cajoling than justifying. Nevertheless, in the Incarnation, the Divine confers upon humanity an honoring identification in every range of experience. Tallon offers the possibility that under the purview of Christian theology, eschatological redemption may include a stunning dénouement, acutely perceived by the tragic vision (194-5).

That this book offers important resources for the development of the aesthetic theme in theological and philosophical discourses is clear. Yet its overall argument might be strengthened by a revised engagement with Hart.

Poetics does not seem to sufficiently address the implications of theological aesthetics for human epistemology and theological discourse as argued in The Beauty of the Infinite. For Tallon, a kind of “hopeful agnosticism” (196) can reasonably govern the tragic vision. But this seems to leave unanswered Hart’s problem with tragic theologies: to ascribe any explanatory meaning to the crucifixion necessarily presupposes a universe in which violence is a logically necessary function of fate. Thereby, human moral formation corresponds to the extent to which one resists these forces. To find meaning in violence is to deploy a concomitant metaphysics that requires gnosis of the primal cosmic forces in order to render comfort (TBOI 381; 398). When Tallon visits this problem (163-4), it is passed over with a simple denial of its conclusion, rather than an engagement with any of Hart’s premises.

Another trajectory of reflection opened by Tallon’s work is for exploration at the literary level of how various artistic tragedies corroborate aesthetic theodicy. Minor excursuses (e.g. King Lear, p. 163-4) leave the reader wanting. Nevertheless, Poetics offers inroads for critical theological dialogue in these terrae incognitae, and so leaves us much the wiser.