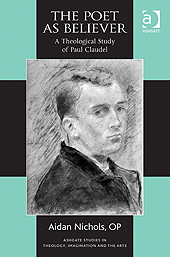 In Aidan Nichols’ review of the life and works of Paul Claudel, he succeeds in capturing the depths of Claudel’s strengths and struggles as poet, playwright, diplomat, Catholic, and theologian.  In his first chapter, Nichols gives a brief yet thorough examination of Claudel’s early life in rural France through to his retirement from French diplomacy and the enjoyment of his grandchildren.  Throughout the telling of Claudel’s ‘nomadic childhood’ and tense familial foundations, Nichols continues to lay out for us the life and experiences of this little-studied man whose work and quieter life of creative expression stands somewhere in the center of early-twentieth-century’s cultivation of French Catholic theology and thought.

In this most thorough study of the theological life and work of Paul Claudel, Nichols examines for us the breadth of Claudel’s efforts in diplomacy, history, biblical exegesis, metaphysics, liturgy and dramas both personal and on the study of human personality. Nichols offers the example of a man whose life’s work sought to achieve some revelation of the infinite God.

While raised in a Catholic household, which Nichols calls less than harmonious, Claudel’s ideals did not always reinforce a notion of the transcendent. Conflicted by his studies at the Collège Louis-le-Grand in Paris, and struggling to find an antidote for the poisonous materialism preached by his professors, as a young man in 1885 he considered suicide.  Here, Nichols reminds the reader of this similarity between Claudel and the young Jacques and Raïssa Maritain, who also considered suicide as young adults.  Though their suicide pact came later in date (1901), both accounts were resolved in a conversion and devotion to Christ within the Catholic Church.  Nichols continues from here with an examination of the theology within Claudel’s works, which proceeds fluidly between and becomes transparent of the public and private dimensions of his life.

The book is largely organized by theological theme, and after the first chapter on the brief and broad timeline of Claudel’s life, his compositions are chronologically placed within each theme.  Nichols records that Claudel found most of his insight and support within the annual cycle of the liturgy (5), to which Nichols has devoted the central chapters, four through seven.  Throughout Claudel’s studies and diplomatic affairs, traveling between France, China, Prague, and finally Denmark, his poetic works flourished into his five ‘great odes’.  In the concluding chapters, Nichols reports on Claudel’s devotion to the Virgin Mary and his approach to biblical exegesis, leaving the final chapter to treat Claudel’s plays more thoroughly- the subject towards which Nichols builds throughout this study.

Suggested as a model for Christian poets in modern times, Nichols does not downplay the importance of Claudel’s Catholicism and the reading of his works as theologically informed.  Since his conversion during Christmas Vespers in Notre Dame de Paris, winter of 1886, the everyday affairs of Claudel’s life were touched by the reality of and reverence toward the transcendent, particularly including his studies, writings, and ambitions to enter monastic life.  Working for the State while placed in China, his growing enthusiasm for the faith was safeguarded from the repression he may have felt at home under the strong hand of the Third Republic.  This same enthusiasm, lived within his daily work and deeply embedded in his theatrical writings, also resulted in the near ruin of Claudel’s career as his religious zeal for the Church in China seemed untamable.

One of his most well-known plays, ‘L’Annonce faite à Marie’ (‘The Tidings Brought to Mary’), is drenched in sacrality and reveals the devotional life of the mediaeval fifteenth-century, as opposed to that of the Counter-Reformation.  In this play, as in his others, we are drawn into the intimate complexity of Claudel’s mind and will as he ‘accentuates the theme of the difficulty of accepting vocation or destiny, and weaves it into an interpretation of history, or at any rate the history of France’ (12).  For Claudel, the historical, miraculous, and present-day are all one symphonic experience and truth attempting actuation, and lend themselves towards salvation.

Throughout his political, familial, and literary advancements, he maintained a lifelong letter correspondence, which is now also published, with many young people in the French literary scene– since their conversions were something he had set in his heart (11).  Within the body of theology and culture, Claudel is related to the Maritains, Henri de Lubac and Hans Urs von Balthasar, to name a few of the counterparts to the Ressourcement movement.  However, we should not be tempted to view his work through a singular lens, since the poetic verse of this quiet theologian could hardly be tamed within his own lifetime.  I am certain that Catholic and non-Catholic thinkers alike have much to enjoy and consider throughout the abundance of his discourses.

Of interest to any East-Coasters in the United States, the Blackfriars Repertory Theatre/The Storm Theatre in NYC’s Upper West Side occasionally runs productions of Claudel’s work through their ‘Paul Claudel Project’, most recently hosting ‘The Tidings Brought to Mary’ in 2009, and ‘The Satin Slipper’ in winter 2010.  Further productions are worth keeping an eye out for!

Sarah Elizabeth Maple is a graduate of the Pontifical John Paul II Institute in Washington, DC.  She is currently a PhD student at the University of St Andrews in the Institute for Theology, Imagination and the Arts.  Her dissertation utilizes John Paul II’s theology of personhood to consider the ‘place’ of the body relevant to the creative act, and with particular focus on the representation of the body in the 19th- and 20th-century visual arts.

Fair use: This image is being used to illustrate the book being reviewed.