Part of The Oxford Encyclopedia of the Bible series, these two volumes are devoted to the Bible and the Arts, and, more specifically, include nearly 150 ‘in-depth introductions to the cultural history of biblical texts, themes, characters, images, and ideas of scripture and the Bible as they have circulated in the arts.’ [xv] The editor explains that one of the encyclopedia’s distinguishing features is that it ‘is organized topically from a cultural-historical perspective, that is, according to entries on artists, art forms, movements, and periods, taking care to contextualize different uses of biblical texts, characters, and images (as well as cultural ideas of the Bible and ‘the biblical’) within their particular cultural contexts, rather than superficially tracing biblical topics like ‘Adam’ or ‘Genesis’ through the centuries.” 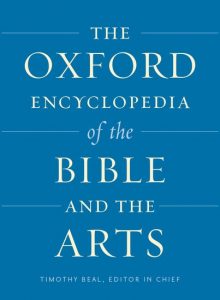 [xvi] This distinguishes The Oxford Encyclopedia from The Eerdmans Encyclopedia of Early Christian Art and Architecture which is more like a standard Bible dictionary. [1] More like the Eerdmans set, though much smaller and not limited to early art and architecture, is Peter and Linda Murray, and Tom Devonshire Jones, eds, The Oxford Dictionary of Christian Art and Architecture, 2nd ed. (2013). For my Transpositions review of that volume, see here.

In any case, after reading through several of the articles in this Oxford volume my impression is that it’s designed for the specialist, and more specifically, biblical or interdisciplinary scholars interested in Biblical reception history. That said, I’ve thoroughly enjoyed perusing essays at almost at random, one on ‘Caribbean Art’, for instance, included a case study on ‘Bahamian Art’. Having just been in Nassau this past February, I saw some of the work discussed, and as my family and I now prepare to move to this developing island nation I couldn’t help but read more about Amos Ferguson’s work, as well as the history of Junkanoo and its costumes. I was also glad to read the entry on John Steinbeck as – following my wife’s practice of choosing an author to read through each year – I’ve declared this my year of Steinbeck. These subjects might not interest you, but perhaps the entries on Blues Music, Leonard Cohen, Bob Dylan, Family Bibles, Hildegard of Bingen, Jesus Movies, Stephen King, Maps, Photography, Marilynne Robinson, U2, or Victorian Literature will. The point is that you’ll likely reach for this volume because of a particular entry rather than using it as a desk reference.

Frankly, I’d suggest buying the Oxford Dictionary first as it’s the most compact, affordable, and general reference. It’s the kind of thing you’ll frequently reach for when you stumble across some unfamiliar saint, or are trying to get your bearings on a topic such as depictions of Christ. I’d then buy the Eerdmans set. It’s a beautiful set, chock-full of fascinating, useful detail. You can then check the Oxford Encyclopedia volumes out from the library. The point is that these sets complement – rather than compete against – one another.

In the history of the development of the horror novel certain periods become associated with certain social and cultural anxieties. The classic example is…