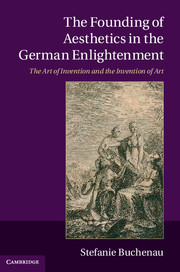 Stefanie Buchenau, The Founding of Aesthetics in the German Enlightenment: The Art of Invention and the Invention of Art. Cambridge: Cambridge University Press, 2013, viii + 272 pp., £55.00/$95.00 cloth.

In this book, Stefanie Buchenau proposes a philosophical reassessment of the contribution of Christian Wolff (1679–1754) and his pupils to modern aesthetics. The Wolffians have, according to Buchenau, been neglected; a strange reality given that Alexander Gottlieb Baumgarten (1714–1762) who coined the term “aesthetics” was among the aforementioned pupils. Why, then, the neglect? Buchenau explains:

The main hermeneutic obstacle seems to come from the fact that, from the nineteenth century until today, commentators have generally judged themselves entitled to adopt a somewhat retrospective, Kantian, neo-Kantian, or post-Kantian perspective…. From their post-Kantian perspective, they have contended that the Wolffians prepared the path to true aesthetics but remain entangled in a pre-modern framework…. They have identified Baumgarten and the Wolffians as transitory authors in a linear evolution extending from Leibniz to Kant, Herder, and Hegel.[pp. 4–5]

Buchenau goes on to propose an alternative approach, one that “take[s] the Wolffians’ acknowledged intentions and ambitions seriously.”[p. 7] More fully, she argues: “Wolffian aesthetics is part of a larger logical debate on creativity, or ‘invention’, which was initiated by Francis Bacon in the early seventeenth century and gave a radically new meaning to the Aristotelian and Ciceronian categories of invention and their ars inveniendi…. Baumgarten’s invention of art and aesthetics follows from the earlier debate on creativity, or invention, and on the arts of invention.”[p. 13]

The first half of the book has mainly to do with Wolff, whose “contribution to the aesthetic debate consisted in effecting a shift of attention from the sciences to the arts, as the place where human creativity becomes manifest, and in extending the notion of cognitive pleasure and beauty from the products of science to the products of the arts.”[p. 66]

The second half of the book (up through Chapter 9), then, has mainly to do with Baumgarten who, once again, founded the discipline of aesthetics. Buchenau explains:

The foundation of a discipline concerned (at least in principle) with the totality of the fine arts viewed as beautiful seems to mark a revolutionary event: the inauguration of a discipline that simply did not exist in the ancient and medieval period, where the beautiful was a property of being but not of the arts, and not yet a predicate serving to describe a certain category of arts.[p. 114]

Finally, in Chapter 10 Buchenau considers the Kantian critique of the Wolffian ars inveniendi. Put simply: “Kant has efficiently demolished some of the very foundations on which Wolffian aesthetics was built.”[p. 211] That said, Buchenau concludes:

The intrinsic value of the Kantian solution is indeed undeniable; and undoubtedly the opposition between the two traditions in terms of methodological options even allows us better to appreciate Kant’s originality as a thinker and problem-solver. At the same time, one might legitimately ask whether Kant’s solution rather tends to mask the profound insights of the earlier aesthetics, which he did not found but simply attempts to refound and partly recover?[pp. 230-231]

This leads Buchenau to ask: “What are these insights originating from the first aesthetics?”[p. 231] Buchenau discusses several. I’ll share just one:

Baumgarten is far more than merely the coiner of the term, the institutional founder, and first university lecturer of aesthetics, and all attempts to reduce his fame to the latter seem in fact quite absurd. He is the philosophical founder of a modern conception of art in which the arts become complementary to philosophy and engage in continuous dialogue with it…. What he inaugurated, therefore, is not an a-priori science but a new and modern interaction between philosophy and art that is essentially what still counts for us.[pp. 232-233]

Immensely readable, The Founding of Aesthetics in the German Enlightenment is first-rate scholarship, and as such, is highly recommended for anyone interested in aesthetics or the history of ideas.