Cameron J. Anderson’s The Faithful Artist: A Vision for Evangelicalism and the Arts presents new, more open ways for the average evangelical, as well as the artist, to pursue art as both worship and vocation. Indeed, as director of Christians in the Visual Arts (CIVA), Anderson draws from his own experiences as both evangelical and artist, ‘fully persuaded that art, in its most exalted form, can be used by God to lead the church to worship’ (5). This persuasion, however, is not particularly pervasive among evangelicals, leaving artists often facing the choice between their church and their craft. Anderson encourages artists not to compromise, and then explains not why the visual arts, and indeed all art, is valuable to worship, but instead how it widens our perceptions of worship and brings us closer to our Creator. 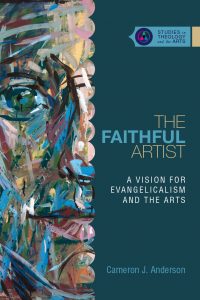 Anderson begins by tracing two movements back to their parallel development in the political and ideological change of the post-war era in which ‘the art world and the evangelical church “came of age”‘ (18). He describes the tension between modern art and evangelicalism as ‘less hostility and more ambivalence…like ships passing in the night’ (47). Having tamed the hostility, so to speak, Anderson looks at more specific arenas where evangelicals have traditionally distrusted art. As described below, some of this mistrust is unnecessarily restrictive. Yet Anderson also acknowledges where evangelical caution is warranted, without fear of calling out evangelical tradition where it has been reckless or reactionary.

Notably, in his examination of the human body in art, Anderson traces how society’s view of the body changed in the post-war period, and its result in increased ‘sexually transmitted disease, interpersonal alienation, sex trafficking and personal brokenness’ (64). While these are indeed causes for evangelical concern, Anderson emphasises the element of “brokenness” to remind evangelicals of the beauty of the imago dei and how God might use the Christian artist to redeem the brokenness of the human body in culture.

Additionally, as an evangelical himself, Anderson speaks directly to evangelicals using the (scriptural) language that they value, while still questioning the value of privileging word over image. This clear vision seeks to open the eyes of the church to a broader definition of worship, not only through visual art, but through all art as well.

The bulk of The Faithful Artist is concerned with the elements of life lying within the artist’s scope that the evangelical church either overlooks or downgrades in order to privilege something else. Anderson leaps head first into one of the most controversial topics: the depiction of the human body, especially the nude. This is followed by an exploration of the senses, where Christian “mistrust” of the sensate ‘minimizes our greater delight in the goodness of God’s creation…which…leads us to wonder, worship and mystery…’ (6). The very way in which an artist receives inspiration, the sensate, is portrayed as sinful and deceptive. Even more distrusted, however, is the image itself. Anderson ‘wades’ into the ‘bitter and long-standing dispute surrounding the use of images’ and ‘the practical outworking of verbal and visual communication’ (7).

Despite the evangelical tradition of privileging word over image, Anderson explores the role of images in Christian life, and even their pervasiveness within evangelical life. Since image is a far older tradition than word, and in light of evangelical’s own limited use of images, Anderson comes to ask which method is, after all, a better method for portraying the Christian story.

Finally, Anderson steps into the always controversial, but necessary, discussion of the evangelical privileging of ‘goodness and truth’ rather than beauty (8). Anderson asserts that ‘evangelicals have barely noticed beauty’ as a concept bigger than a word ‘on the overhead screens’ (222). As a result, they ‘fail to comprehend beauty’s true purpose,’ that is, when combined with her companions, truth and goodness, ‘beauty is a signpost of God’s glory…’ (226).

After reexamining each of these aspects, Anderson presents his own vision for evangelicalism and the arts – demonstrating how reunion of the two can lead to a church serving the Creator God more faithfully, reflecting His creativity and beauty.

The Faithful Artist describes the rift between art and evangelicalism as a cultural development which has, over the years, developed into an “assumed schism” that too few in the evangelical tradition stop to examine closely. Anderson’s task is not intended primarily as a history of modern art and evangelicalism, but by beginning his account in the earliest stages of the rift, it becomes more possible to remove the reader’s modern predisposition toward a “side” in the argument, thereby taming the hostility and preventing the two sides from seeing past each other. Through the clarity of this contextualized approach, the reader is able to see clearly how often the evangelical position has been to privilege one aspect of faithfulness over another – spirit over body, tangible over sensate, masculine over feminine, adult over child, word over image – when in truth, all of these elements are part of God’s masterful creation. 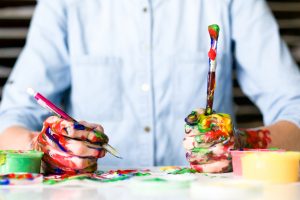 Anderson writes with the respect and knowledge of someone who has faced these choices personally, and decided to compromise neither faith nor art in the pursuit of the other. His content is encompassing and thoughtful, but accessibly so. The work does not burden the reader with complicated theories and philosophies, but instead speaks plainly and coherently, supported by an extensive academic bibliography. He pairs his research with frequent biblical support, aptly using Scripture to illustrate how evangelical emphasis on the Word can lend itself to a more open view of art and worship.

While the immediate audience may be artists, The Faithful Artist can, and likely should, be read much more broadly, demonstrating how the average evangelical may approach worship with the eyes of an artist. As Anderson encourages the artist not to choose between faith and art, he also encourages the churchgoer not to choose between God’s gifts in creation, but rather to approach both with discernment and faithfulness. As such, the book should not be limited simply to the visual arts in its readership, or even artists in general, but is open to anyone, regardless of artistic talent or interest, seeking to grow in faithfulness, walking closer with the God of creation.