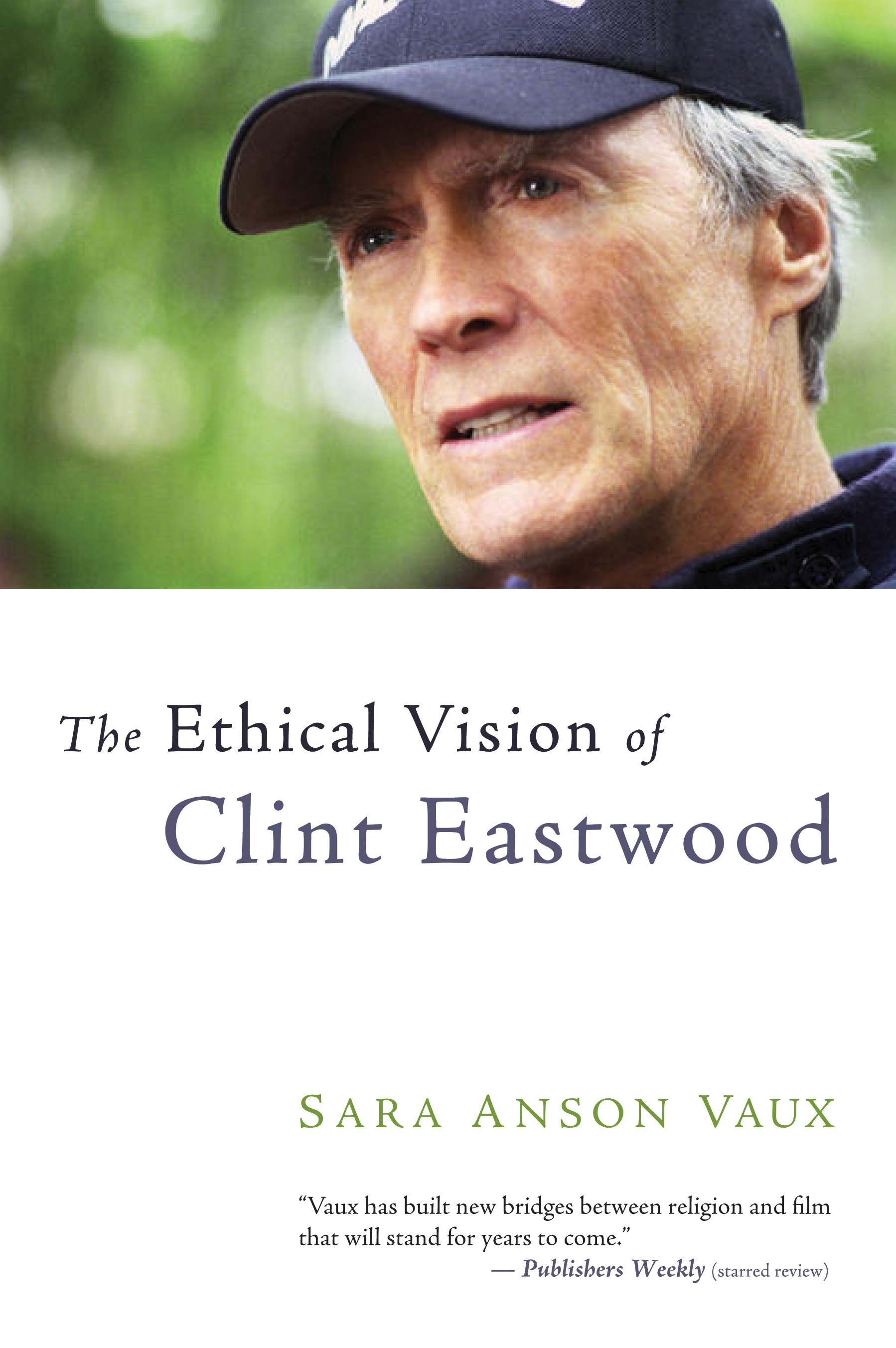 In the Ethical Vision of Clint Eastwood, Sara Anson Vaux, Lecturer in the Department of Religious Studies at Northwestern University, presents a captivating analysis and theological interpretation of Clint Eastwood’s catalogue of films for which he was the director, and in which he often acted as well. I will use two categories – analysis and theological interpretation – to describe her approach as they describe the two-fold nature of Vaux’s interaction with Eastwood’s directorial film corpus in this book.

On the one hand, the reader will discover, in Vaux’s analytical approach an almost exegetical uncovering of overt themes such as war, violence, war propaganda, poverty, drug abuse, racism, sexism, the nature of human community, and human nature itself. On the other hand, and from the perspective of theological interpretation, the reader treks with Vaux through her own reception of the movies’ content, as the philosophical, theological, and emotional elements of the various characters, scenes, and themes meet in the horizon of her own Christian worldview and presuppositions, creating a unique hermeneutical encounter and an existential moment of new significance and understanding.

Most of the time it is clear to the reader whether she is describing the analytical or the theological/hermeneutical texture. However, there are multiple instances where it is unclear. For example, when Vaux is discussing Eastwood’s The Outlaw Josey Wales, she notes that Eastwood “steadily dissects the myths that perpetuate egoism and greed,”[p. 25] which seems to be a keen analytical insight. However, she continues by describing Eastwood’s intention in the film to be to replace “national protectionism, racism, and class hierarchy” by modeling “generous, tolerant, border-free communities where all can live in peace.”[p.25] One wonders, at this point, if this is only a partial emphasis of Eastwood’s own underlying intentions, perhaps with additional elements (border-free communities?) read into the interpretation and infused with her own political ideology. This is especially striking because, despite the fact that Vaux cites Eastwood as saying that he actually does not make movies to make social analyses, her recommendation is nevertheless that “we should believe what he shows us, not what he tells us.”[p. 25] Later, when she makes reference to the theme of vengeance in Josey Wales as “the Cain-and-Abel drama” and in her comment that “the parable of the Good Samaritan…seems (my emphasis) foundational in Josey Wales,”[p. 37] it is once again unclear whether these are theological themes that Vaux is bringing to the table, or those which she thinks Eastwood is consciously evoking. Likewise, was it really Eastwood’s intention that the “end time flavor” of his film Pale Rider, was meant to say that “in eschatological hope … together we can fashion a better (if not a perfect) world?”[p. 54] Perhaps, but I doubt it, especially since on the following page Vaux concludes the chapter with her own vision for interfaith cooperation, making use of Rosemary Radford Ruether’s idea of a “cooperative reciprocity of nations” as her hermeneutical take-away from the movie Pale Rider which seem to be opinions that she brings to the table quite apart from, but surely arising from her interaction with and reception of, the film’s content. In these cases, Vaux’s own (often legitimate) significances, concerns, and interpretations ought to have been more clearly delineated from those of Eastwood.

Many times, in blogs and works of this sort, we simply find an author searching for baptism themes, or atonement motifs; that is, merely reading the meta-narrative or core components of Christian soteriology into every element of a film. In contrast, with Vaux, we get to enter into the deep narratives of Eastwood’s films. The interpretive experience itself is actually theological, world-creating, and narrative (and potentially real) world-changing. We enter with Vaux into the narratives of dehumanizing violence, suffering, and loneliness in Part I which surveys Eastwood’s Westerns (High Plains Drifters, The Outlaw Josey Wales, Pale Rider, and Unforgiven). Next, in Part II “Mysteries of Life” (including the films Mystic River, Million Dollar Baby, Changeling, and Bird) we struggle with her in the context of narratives about drug abuse, the loss of children, the rise and fall of a boxing underdog, end-of-life ethical dilemmas, and racism. In Part III, “Eternal War or the Dawn of Peace?” (which includes: Flags of our Fathers, Letters from Iwo Jima, Gran Torino, and Invictus) we encounter the futility of war, the myth of redemptive violence, and the road to reconciliation. Lastly, in Part IV “Hereafter: Eastwood and the Reconciling Community” (Hereafter), we deal with the themes of spirituality and transcendence.

This book brilliantly hones in on, dwells in, and wrestles with the thoroughly universal themes and characters of Eastwood’s films in conversation with a Christian perspective and theological worldview. Vaux isn’t simply reviewing art here or finding unconnected Christian tidbits under every secular rock. Rather, she is doing theology in, with, and through her interaction with Eastwood’s films, and the results are paradigm shifting, theologically rich and robust, strikingly real, hope-filled, and human.

John Frederick is a PhD Candidate in New Testament at the University of St. Andrews.  Before coming to St Andrews, he studied at Berklee College of Music (B.A.) and Gordon Conwell Theological Seminary (M.Div.). He blogs at Truth Within the Static.