At a time of great change politically and globally, The Empty Church is a very helpful, fascinating and important text which provides appropriate challenges to the church, its members and followers. Despite the apparently nihilistic title, there is much to encourage us in this text, which digs down to layers beyond the expected and draws fascinating links between the church and theatre. Read and re-read with close attention, this text can provide the starting points for the next great conversation with which the church should engage itself and the communities it serves. There are flaws within the text and on occasion it lacks fluency, however it opens an important conversation about the purpose of and therefore the form taken by our churches.

In the central chapters of the book, we are asked to imagine an ‘ideal dinner party to which an eclectic set of guests’ such as Don Saliers and Constantin Stanislavski have been invited. This engaging, imaginative approach enables the text to go way beyond the obvious links between the church and theatre formed by the performance of the Christian narrative or the communion liturgy within the church service. This text is more interested in the parallels between the creation of theatre and church members as co-creators of the acts of worship. An unresolved dilemma is who is the audience in the worship context, however this is minor dilemma which poses an interesting question.

A performance requires a script. For a church member this script can take the form of the Bible, the commandments and the traditions we follow.

However, an exciting idea posed by this text is that we change the script by performing it. As we live out our beliefs and so perform from them in our lives, we become performative and help to progress the unfinished scriptural text. We also understand our script better (eg the Ten Commandments) by performing from them, by living through the commandments in our lives. A key idea taken from theatre is the ‘doubleness’ of a performative self, an actor striving for the perfect performance of their character. In the same way, the Christian lives a double live – striving for the ideal while understanding it is unattainable. In a sense this is an extension of our everyday activities in which we may strive for the ideal self in the clothes we wear and in the actions we perform, however given the theatrical context, it becomes more meaningful.

The central chapters of the book have underpinning themes of incarnation, ministry, the cross and the empty tomb. These themes guide the selection of the theologians and the theatrical practitioners in each of the chapters. Interesting links are drawn, in the chapter on incarnation, between Stanislavski’s approach of drawing on the storehouse of emotions and Ignatius using gesture to stimulate the remembrance of an emotion such as repentance. In the Ministry chapter, Brazilian dramatist Augusto Boal’s challenge to catharsis in theatre is examined and applied to the purging of guilt in church encouraged by the collection. As we support good causes, we can feel we have ‘done our bit’ and so don’t need to challenge the existing order. In the same way Boal challenged passivity in theatre, Letty Russell in the mid 20th century challenged the disempowerment of the laity in the church by such a passivity. She encouraged ‘reading from the margins’ such as engaging with the Nazarenes’ viewpoint in Luke 4. Clever links are drawn by the author between Russell’s work and that of Boal who also encourages a different view of the oppressed and an alternative ‘reading’ of our social structures. 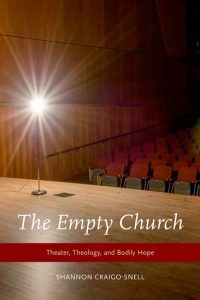 This challenge to the current order is developed further in the chapter on the cross. Performance can reinforce the values of the oppressor through its reiteration of what is held to be true by society. As seems to be popular with theologians of drama and the cross, the work of theatrical practitioner Bertolt Brecht is called upon because of his attempt to create an alienation effect, distancing the audience in order that they might learn. However, more excitingly and disturbingly, the author relates Brecht’s writings to the radical theologian Delores Williams and her challenge to the conventional understanding of the surrogacy of the cross which can unconsciously excuse the scapegoating of those we regard as other. An ‘alternative’ view of the cross can be developed through a jolting of our cathartic view of the Eucharistic. We can call on our intellect to alienate ourselves from an emotional and cathartic response in order that we might identify in the sharing of the Eucharist with the sufferings of those we regard as other.

One major flaw in the text is that it can read as a historical narrative despite being very relevant to our current social, cultural and political context. In particular it makes no reference to the many current theatrical practitioners who are drawing once again on the work of Brecht in modern developments of epic theatre. The work of Max Stafford Clark at The Royal Court Theatre in the latter part of the twentieth century, and the current work of Emma Rice and Kneehigh Theatre Company, come to mind particularly as having much to offer to the church as they develop theatrical forms which powerfully entertain, and instruct while constantly challenging the boundaries between audience and performer. The ideas in the text could also have been developed even more powerfully by a consideration of the growing phenomenon of verbatim and documentary theatrical forms which present real-life events and words in an alienated form.

In ‘The Empty Tomb’, the final chapter, a novel comparison is made between the work of theologian Karl Barth and theatrical practitioner Peter Brook. It is unlikely either of them would have wished a conversation with the other, however the link is strong. Both seek an emptying; Barth wishing the church to be emptied of human action so it can become an event of God’s action, Brook wishing the theatre to be emptied of meaningless words and actions (Deadly Theatre) so that space is created for Holy/Rough Theatre. For both emptiness is a discipline and a clever link is developed by the author to the empty tomb. Once again, there are more modern theologians and Christian mentors who could have been pointed to. I am provoked to think of the writings of Richard Rohr and the work of Shane Claiborne in particular.

However, despite these criticisms, this text is a provocative call for a radical re-examination of all that we call church. It has much to challenge our assumptions and, in its call for an emptying, provides the counter-cultural challenge we should expect from the best theological writing.