This book of fifteen chapters seeks to present an introduction to what the author perceives about the wit of Jesus. Wallace sets out the background to the Jewish interpretation of wit, and introduces a methodology for identifying the wit of Jesus through analysis of several parables. She concludes her analysis by addressing issues raised throughout the book regarding the resurrection and its effect on the moral imagination, among other conclusions which are looser and more personal.

The opening chapter sets the background to Wallace’s personal work in the field, explaining her motives for the work in hand. This is a social background that deals with similar problems that American Christianity was facing immediately prior to the most recent Presidential election. Wallace sets out the conflict between what she perceives as fundamentalist Christianity and the more literary, interpretative approach favoured by more Liberal theologians. A brief second chapter relates the author’s own struggles with the concepts she is addressing in the book. 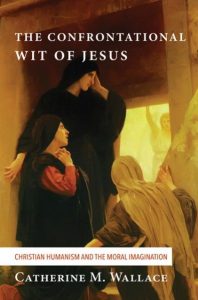 In the third chapter, Wallace presents the non-violent moral imagination of Jesus which will become the basis for her analysis of the ways in which Jesus engages with His opponents. Christ’s ‘prophetic demands’ are expected to challenge the reader as well, however. One of these is a view of salvation which eschews the atonement theology of a wrathful, sacrifice-seeking God: ‘The good news of the Gospels is not that Jesus has slaked the wrath of God by accepting vicious physical pain on our behalf. The good news of the Gospel is that God is non-violent. …The God proclaimed by Jesus would never crucify anyone.’ (Italics in original). (26)

In Chapter Four Wallace begins an exegesis of some of the parables in the light of this understanding of a non-violent God. In reading the Gospels, the author argues, we need to see the Christ as presented by the Gospel writers as a sequence of pictures or ‘cards’ on which are written memories of an event which then have to be imaginatively interpreted by the reader/listener. This cannot be done, she writes, without due reference to the historical and philosophical-theological milieu of His time but, nevertheless, it always has to be borne in mind that what we are reading are stories to engage the moral imagination. Jesus’ actions are symbolic and the symbolism needs interpretation through the ethical exercising of our imagination.

As is made clear throughout chapters Five to Ten, the main way in which Christ presents His message is through couching it in satire: herein lies the “wit” of the title. This form of wit has to be set into context and this is what Wallace elaborates upon in these chapters. Satire ‘always needs footnotes’ (p.45) and, in the understanding of these footnotes, we come to see that some things are not to be taken literally (as the fundamentalist school of American populist theology would have us do). Wallace tackles the biological origins of Jesus in this light, claiming that Jesus’ being the Son of God was ‘not a claim about extra-terrestrial sperm’ (p. 46). She follows more orthodox interpretations of other parts of the birth narrative, referring to the gifts of the wise men, for example, as indicative of events to come. Wallace’s book then wrestles with whether eternal life is a fact or fiction in the mind of Christ – a quandary which stays with her throughout the rest of the book. She defines aionios zoë as life eternally being made by God (that is, in her interpretation, continually being made and as something in which individuals participate in their time. Does this mean that the traditional, ‘Christian’ interpretation of ‘eternal life’ is or a misinterpretation by the Church of a metaphor for the compassion of God? ‘Is it poetry or astrophysics?’ she wonders (72).

Throughout the remaining exegesis, Wallace develops her presentation of Christ as one of non-violent, ethical opposition. Modern day examples of the religious Right are considered alongside those who commit violence in the name of religion, as Wallace discusses the Sermon on the Mount. Using the example of martial arts, where the physical energy of the aggressor is turned against them, Wallace likens the satire of Jesus to such an action, turning the aggressive language and behaviour of aggressors against themselves.  (84-97). Chapters Nine and Ten look at episodes when Jesus used coins to make His witty points – the ‘rendering unto Caesar’, the Widow’s mite and the parable of the Good Samaritan are held up as instances of satirical wit in which possessing money is shown to be a responsibility that, if managed in any way that is less generous than the Samaritan, results in embarrassment. In Chapter Eleven, Christ’s crucifixion is also seen as a satirical action, using weakness to be powerful. Jesus presents a God who is opposed to violence, one who reverses the ‘standard’ power strategies by deliberately taking on the role of the under-dog. This Messiah does not present military or millennial might (120-1) but rather the unforeseen messiah (128) who subverts the political and theological norms:

Some people have always written off Jesus as a fuzzy-minded romanticist for his teachings about equality, inclusivity, and compassion. But Rome recognised just how dangerous these teachings are. Rome understood that quick-witted, media-savvy religious leaders like Jesus can challenge the political order. They do so not with weapons…but by changing how people think…It’s up to us then… to decide which of these Sons of God we will accept as role models and as moral mirrors in which we see our own deepest identity reflected. (133) 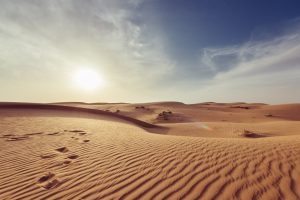 Towards the end of the exegesis, Wallace’s criticism of established religious understanding perhaps comes out strongest: while we judge Judas for betraying Jesus we rarely condemn Peter for the same type of behaviour. Christ’s resurrection is affirmed in a very qualified way – ‘since in Jesus the human and the divine have come together decisively, that means Jesus rises bodily from the tomb. Inside the story. Narrative theology. Poetic nonfiction. Not cell biology… He is not resuscitated. He is eternal. That’s something quite different.’ (147, italics in original.) Attention then turns, in the final two brief chapters, to what may always have been the author’s more personal priority: the question of how the moral satirical resistance of Christ might be practised and what the psychological implications are of her view of the eternal compassion of God that does not resolve in a personal realisation of eternal life.

Wallace’s work is a hybrid of discussion of personal thoughts and exegesis of theological matter. It sometimes displays a theological naivety or inexperience but this is to be expected from a publisher who deliberately seeks to engage a lay readership as well as a theologically literate one. The author has very perceptive moments when treating the narrative as a script to be imagined and presented. Stories are investigated (rightfully) as more than words to be defined or expounded on but as memories to be re-imagined and explored. The identification of satire and its use as a vehicle for resistance to power is not original but is tolerably well constructed and is successful within its own parameters. Nevertheless, despite her own exhortation to imagine the stories, Wallace fails to identify forms of humour other than intellectually-based satire, such as would emerge from a truly ‘dramatic’ rendition, for example slapstick humour. It is an intellectually determined response, valued mostly for its practical ramifications.

Stylistically, the author allows her writing to wander into moments of irritating familiarity. In trying to be engaging, Wallace ends up being casual; this does not always help her make her argument. Then again, this is not, and does not claim to be, an academic work, but an essay of thoughtful personal reflection on aspects of theology that have been abrogated by the Right and which the Left, Wallace feels, needs to challenge.

Sheila Rosenthal is a PhD Candidate at in the Institute for Theology, Imagination, and the Arts at The University of St Andrews. Her research looks at the Gospels as script rather than as text and as intrinsically comedic as well as often comical and thinks of the Gospels as recorded performance scripts, adding a different dimension to the perceptions of Christ. She is an ordained Anglican from Gloucestershire and works in the Episcopalian Church while studying in Scotland.