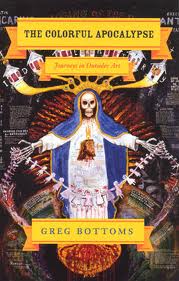 This volume, exploring the lives and works of three prominent southern fundamentalist Christian outsider artists, is an interesting mixture of literary journalism and memoir. In crisp and engaging prose, Bottoms unpacks and reflects upon his extended interviews and interactions with William Thomas Thompson, Norbert Kox, and the family of Howard Finster. He allows the interviewees to speak directly to his reader while exploring the ironies and excesses of the outsider art scene, the borderline of mental illness and genuine religious experience, and the inherent paranoia the drives the already message driven medium of Christian outsider art.

Bottoms begins with his interview of Beverly Finster, the daughter of Howard Finster, at Paradise Garden, Georgia—a compound that served as an informal headquarters of the outsider art movement and houses the “World’s Folk Art Church.” The discussion revolves around the impact of Finster’s work and the question of religious experience, mental illness, and poverty. Bottoms explores Finster’s legacy through the lens of his daughter, fellow outsider artists, and filmmakers who worked closely with Finster. The perspectives are diverse and in each interaction Bottoms draws out the dark irony of the perception of outsider artists. Central to this perception is Bottoms’ statement that “I envision, rightly or wrongly, a roomful of art browsers and collectors … eating expensive cheese and sipping fine French wine, at once celebrating and patronizing an old man who had a fifth-grade education and misspelled many of the biblical messages in his paintings.”[p. 12]

Bottoms then deals with the work of William Thomas Thompson, another southern fundamentalist Christian outsider artist who received a vision of the Apocalypse while in Hawaii to received treatment for a mysterious nerve disorder. Thompson’s shocking and violent re-appropriation of religious imagery and conspiracy theories regarding Masons, the Illuminati, Jews, the Pope, and the ecumenical plot to change to the name Yesu to Jesus rattles Bottoms. He struggles to come to grips with Thompson’s massive life change from a wealthy southern Pentecostal (pre-vision) to obsessive, caustic, critical, message driven outsider artist (post-vision). Bottoms reflects on his own brother’s experience with schizophrenia and the art world’s odd fascination with people like Thompson. Again, he is defensive of these artists: “Here’s a thought—how about treating these artists, these addicts and preachers and inmates, like people, letting them talk and listening.”[p. 83]

The volume concludes with Bottoms’ sketch of Norbert Kox—a former biker turned recluse with an art degree from the University of Wisconsin Green Bay. Kox’s impulse to create outsider art derived from a bad acid trip, the memories of which often linger in his paintings.[pp. 149-150] Bottoms describes the cluttered chaos of Kox’s home and his feeling of initial discomfort at the sight of one of Kox’s unfinished works (parts of dolls dipped in red paint nailed to a cross). Kox is portrayed as more articulate and cautious than Thompson, but the collaborative work between the two (the cover art of the volume) illustrates Kox’s penchant for the extreme, bizarre, and conspiratorial. Yet, Bottoms portrays Kox favourably in comparison to Robert, a “wanna be” outsider artist who adjuncts at UWGB and shares a studio with Kox. The contrast is telling.

Regarding the volume as a whole, Bottoms states, “I didn’t want to be a critic; more like a documentarian. My idea was to talk to the artists themselves about their intentions.”[pp. 164-165] He accomplishes this goal. The volume is an attractive mixture of extended quotations from interviews, excerpts from Thompson’s diary, recollections of televangelists, first hand description, engagement with larger issues (poverty, right-wing fundamentalism, mental illness), and his own attempt to reconcile the artists with the art that they create. The prose is clean and exacting. In this sense his presentation stands in contrast to the chaos of the pieces these artists create.

Overall, Bottoms presents the complexities and ironies of outsider artists and the outsider art movement in an engaging and sympathetic manner. For those interested in this area, I strongly recommend this volume.