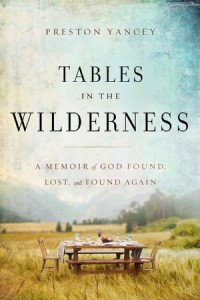 This book’s back cover bio begins: “Preston Yancey is a lifelong Texan-raised Southern Baptist who fell in love with reading saints, crossing himself, and high church spirituality.”

This is, in many ways, nothing new.

Robert Webber wrote Evangelicals on the Canterbury Trail: Why Evangelicals Are Attracted to the Liturgical Church in 1985.  Since then, we’ve seen the same story told in a variety of books, Colleen Carroll’s sociological take in The New Faithful: Why Young Adults are Embracing Christian Orthodoxy (2003), for instance.  Or more recently, a spate of titles in the CBA market: Mark Galli’s Beyond Smells and Bells: The Wonder and Power of Christian Liturgy (2008), Todd D. Hunter’s The Accidental Anglican: The Surprising Appeal of the Liturgical Church (2010) and Robert L. Plummer’s (ed.) Journeys of Faith: Evangelicalism, Eastern Orthodoxy, Catholicism and Anglicanism (2012) to name but three examples. Less well known, perhaps, but no less relevant here are two volumes of essays from Cross and Thompson, eds., Baptist Sacramentalism (2003) and Baptist Sacramentalism 2 (2009), and then more recently still, Melanie C. Ross’s Evangelical versus Liturgical?: Defying a Dichotomy (2014).

We might also remember those stories unwritten. Austin Farrer’s father was a Baptist minister. Raised Baptist, Farrer later converted to Anglicanism. My own background is similar. The child of Baptist missionaries, I attended a Baptist college and two Baptist seminaries. In the second of those two seminaries, I took a class with the Revd Dr Michael Van Horn, an Evangelical Covenant Church pastor with liturgical leanings.[1] He’s the one that introduced me to liturgical worship and prayer, guiding me to resources like The Divine Hours (3 vol.) and Venite. And it was in his home in Redford, near Detroit, that my wife and I spent an evening chatting with Lauren Winner (after which I read Girl Meets God, Mudhouse Sabbath, and all the rest). Van Horn’s sometime North Park colleague Scott McKnight, like Van Horn an alum of Grand Rapids Baptist College, is yet another example.

I could go on, but suffice to say that converting to Anglicanism, or at least considering the possibility of doing so, is, it seems, an evangelical rite of passage, and writing/reading books about it, an evangelical pastime.

Like I said, this book is nothing new. But what’s so great about being new? Increasingly, I’m convinced that what we need is the same-old. But unlike Basquiat’s SAMO, this same-old is the good news. And I’m here reminded of a recent radio interview with Stanley Hauerwas. When Al Mohler asked Hauerwas, “where is evangelicalism going?” Hauerwas responded:

I think evangelicalism is destined to die of its own success and it will go the way of mainstream Protestantism because there’s just—it depends far too much on charismatic pastors, and charisma will only take you so far. Evangelicalism is constantly under the burden of re-inventing the wheel and you just get tired. For example, I’m a big advocate of Morning Prayer. I love Morning Prayer. We do the same thing every morning. We don’t have to make it up. We know we’re going to say these prayers. We know we’re going to join in reading of the psalm. We’re going to have these Scripture readings. I mean, there’s much to be said for Christianity as repetition and I think evangelicalism doesn’t have enough repetition in a way that will form Christians to survive in a world that constantly tempts us to always think we have to do something new.[2]

Christianity as repetition. Now that’s interesting. And insofar as Yancey’s Tables in the Wilderness reminds us that we need not do something new, I wholeheartedly recommend it to college-age readers wrestling with their tradition. All this being said, I can’t help but think of the closing paragraphs of C.S. Lewis’s “Preface” to Mere Christianity where he reminds his readers that “it is in the rooms, not in the hall, that there are fires and chairs and meals.”[3] Those paragraphs describe how one might wait, and Yancey’s book is an extended variation on the theme.

[1] Van Horn is well-known in the denomination for  having been fired from what was then Grand Rapids Baptist College for “suggesting in writing the possibility that there was no physical heaven or hell, that perdition consisted of alienation from God.” (“Van Horn, Michael A[llen],” in Encyclopedia of Evangelicalism, rev. and ex., Randall Balmer [Waco, TX: Baylor University Press, 2004], 709.)
[2] “Nearing the End: A Conversation with Theologian Stanley Hauerwas,” Thinking in Public. Online: http://www.albertmohler.com/?p=31352, accessed 28 July 2014.
[3] C.S. Lewis, Mere Christianity (London: Collins, 1942), xv.