This is a fun book. Lurking behind profound scholarship and deep knowledge of a vast array of literature, ranging from poems through hymns to Scripture, lies a sense of humour and dry wit. These attributes spice the reading and carry the reader from fact to theory with the consummate skill of an author who knows what they are about. 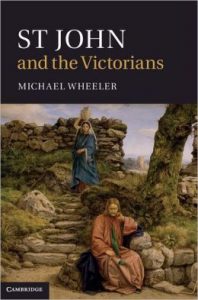 St John and the Victorians is what it purports to be, a scholarly book reporting on the relationship between the Fourth Gospel and the Victorians who engaged with it against a backdrop of growing Darwinism and the Catholic-Protestant agitations that characterised some of the period.

The first chapter hazily describes who St John is and may have been more digestible if this issue had been dealt with later in the book. But Wheeler is not and doesn’t claim to be a theologian. Instead he seeks to set out the theology of John as the Victorians would have received him through art, sermons and printed material of the time–of which there is a grand choice.

Using well known and well respected authors and artists, and some who would often not get noticed, Wheeler takes the reader through significant Johannine passages, setting out the stalls of the Catholic-Protestant protagonists in an even handed and sometimes bemused manner. The intrigues of the Tractarians and the ‘new Catholics’ are set out with grace rather than rancour or judgement, allowing for that most human of all traits, the changing of the mind. Wheeler tackles the language, the re-presentation and the reception of John by the Victorians. His writing style, though crammed with information and comment, is not turgid. This is not an author that ploughs through material, laboriously turning over the weighty clods of academia, but one that harrows the soil to break up heavy material into friable growing ground.

Appropriately, Wheeler looks at the Victorians engaging with the miracle at Cana, the woman at the well, the raising of Lazarus, the crucifixion and the Apostle to the Apostles, Mary Magdalene with the risen Christ. He omits the controversial woman caught in adultery and the cleansing of the temple which is a shame as I feel his understanding of the period would have shed much light on these passages, albeit the dusky light of a Victorian gas-lamp, with shadows and shades. Sadly the printed illustrations in the book are a little dark but this must be because the originals have so much colour in them that shades of grey become sludgy in reproduction.

Rather than referring to as many authors, artists and theologians as possible, but referring to the same few throughout, to comment and illustrate John’s gospel, Wheeler creates a unity of critique that quickly becomes familiar. When he cites Wordsworth (Christopher, not William) or Keble, Ruskin or Dods, he does so in sequence so that the reader comes to anticipate their appearance. Thus a picture of continuing presence by these magisterial Victorians is established without them being dominant or confusing. Similarly with the painters and poets, there is a progression or parade of logical presentation which makes reading and viewing an easy task. At the end of the book you realise just how much more you know about the Victorians and their attitudes without the feeling of exhaustion or overload that some academic books can bring. 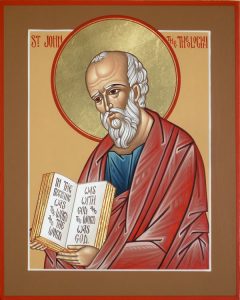 There are priceless gems of humour, including Wheeler’s own and quotations from others that any student would want to include in their own work. Quoting Kitto in The Pictorial Bible –“ ‘John is apt to repeat the same words’ possibly because old age is ‘prone to repetition’ “ (p. 47). Or this, a page later, commenting on the likes of Liddon, Tennyson and Westcott’s attitude to the writing style of John; “The simplicity of John’s language was usually explained biographically: he was a divinely inspired fisherman, writing in Ephesus in his second language” (p. 49). This is a wonderful example of the self-unaware patronising attitude of the Victorians in their genuine attempt to see the best in what they obviously thought came into the ‘could try harder’ bracket of school reports. But Wheeler also puts in the praise, quoting Godet’s commentary on John, ‘In John’s language, the clothing alone is Greek, the body is Hebrew; or as Luthard says, there is a Hebrew soul in the Greek language of the Evangelist’ (p. 48).

When Wheeler approaches the numerous poets and hymn writers of the age, especially those many who, from their sick beds, wrote edifying meditative works for the consumption of those dying of the same, he shows a gentle tolerance for the genre. However, even he cannot do much for Caroline Noel at her worst. Instead, he comments, ‘The opening stanzas are so badly written that it would be cruel to quote them’. To redeem them both, he then puts Noel into the surely uniquely Victorian context of a sickly woman writing for sickly women, encouraging them to take heart, to do their best and to look to their husbands and Christ for the strength to live or die nobly and above all, with Christian fortitude.

His even-handed treatment of the Victorian material on Mary Magdalene is also a delight. It would have been easy to go for the stereotype rather than the picture actually presented by a close reading of the text and by the theologians. This sums up Wheeler’s comprehensive approach whilst not overloading the reader with information.

The only notable critique of the work is Wheeler constantly attributes his biblical quotations to the NRSV when clearly they are from the KJV. The Victorians, of course, would have used the King James Version. So quoting from KJV is appropriate and it’s surprising that such a competent academic should misappropriate the citation.

Once you get past the muddy opening chapter discussing the person of John and into the discussion proper of setting the milieu, in which one is introduced to the varying and various attitudes of the writers and artists that we will be illumined by on our journey, one will find Wheeler’s book to be a sure-footed, lively, articulate and illuminating romp through what is often perceived as a gloomy era of dark churches, dark souls and dark piety.

Sheila Rosenthal is a PhD Candidate at in the Institute for Theology, Imagination, and the Arts at The University of St Andrews. Her research looks at the Gospels as script rather than as text and as intrinsically comedic as well as often comical and thinks of the Gospels as recorded performance scripts, adding a different dimension to the perceptions of Christ. She is an ordained Anglican from Gloucestershire and works in the Episcopalian Church while studying in Scotland.

The Society for the Study of Theology Postgraduate Conference Images, Icons & Idols 9-10 January 2015, University of Manchester This conference seeks to explore…