It is a pleasure to be reviewing the first monograph by an author with manifold connections to the Institute for Theology, Imagination and the Arts, as a graduate doctoral student and a thinker who continues to make enlightening contributions to Transpositions. The affinity is detectable, and this makes the study a comforting, as well as a stimulating, read for a graduate of the Institute’s MLitt programme. One of the book’s greatest strengths is in McCullough’s lucid and accessible prose, a quality which sometimes seems bizarrely and brazenly underrated in related academic fields to this. The author admits that, especially bearing in mind the concision of this text, his comments on the works of art are not meant as ‘full-blown commentaries’ but instead might be taken as ‘something more akin to liner notes for a record album’ (62). Instead of performing agile and sometimes mind-boggling feats of interpretative criticism, the ‘aim’ is explicitly ‘to provide the non-expert an introduction to the craft, to aspects of its means of communication, and how the particular artist inherited and advanced the medium in their works’ (62). 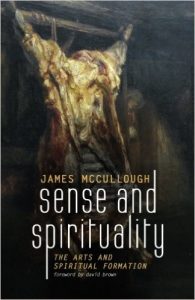 This attractive writing style also extends to the more philosophical first part of the book, which establishes the claim for which the later artistic analysis serves to exemplify. Chapter One lays out broad foundations, describing some of the history of the Christian embracing of the arts, for example with information about Francis Schaeffer’s pioneering writings on the subject (7), but McCullough also relates his thought to the rather more radical writings of David Brown on the potential function of the arts as a sacrament, ‘both a sign and a real extension of God’s presence in the world made available to human understanding and experience’ (6). The author sharpens his focus into the careful statement of a thesis, with helpful keywords: the idea that aesthetic experience, ‘sense’, contributes to spiritual formation; and especially how an imaginative engagement with the arts might ‘catalyse’ this (9).

The second chapter is an attentive outlining of how the arts often require a constant, almost personal engagement that is akin to devotion. The definition of the fundaments is simple and memorable, though warranting the interesting expansion given it in the rest of the chapter: ‘the employment of craft, the production of content, and the dynamics of context’ (35-6). Chapter Three then furthers the definitions of the three key concepts, and theorises about the practical possibility of artistic catalysis of spiritual development. The author cites the interesting theories of T. S. Eliot as to the need for an initial ‘bewildering minute’ in one’s encounter with a piece of art which brings about a greater depth of later knowledge: pertinent to many pieces of art, not least Eliot’s (45-6).[1]

The chapter on T. S. Eliot resembles album sleeve notes very much indeed, but not without making the essential connection between Eliot’s poetry and the possibility of a spiritualised aesthetic experience. McCullough’s explanation of Eliot’s rather formidably nebulous references to a ‘dissociation of sensibility’ is one of the most valuable parts of the chapter: the author describes convincingly how Eliot adapted his poetic technique to make it more difficult in order ‘to force, to dislocate if necessary, language into his meaning’, creating ‘naturalness of expression matched with complexity of thought’.[2] The subsequent exploration of the visual artistry of Makoto Fujimura is enlighteningly specific on its argument with relation to Fujimura’s affinities with the vernacular Japanese standard of Nihonga, a theme- and motif-based style. The chapter’s argument brings up pertinent connections with the modernism and abstraction discussed previously, with regard to Eliot. McCullough’s discussion of Sir James MacMillan’s music in the third and final analytical chapter also serves as an arsenal of helpful knowledge with which to equip and educate the listener. The point is made that MacMillan’s work ‘may be one way of redressing this imbalance [in minimalistic music’s tendency to emphasise tranquil, rather than suffering, states of being in the spiritual], as well as developing new capacities in musical attentiveness and emotional engagement with a point of faith and doctrine’ (100).

Yet, it would have been more daring to have chosen pieces of art which are not already overtly associated with Christian spirituality; this is especially the case, given that the main project upon which this book is based was supervised by David Brown, who emphasises the characteristic ‘generosity’ of God in making the divine Self accessible in the widest variety of physical realities. The argument of the book might therefore seem somewhat uncontroversial. However, this relative simplicity is also clearly an example of another kind of generosity: one like the poet George Herbert’s, in making accessible profound divine and artistic reflection to the uninitiated, and in its capacity to serve as an ecumenical cornerstone for the convictions of many. It is, as such, highly recommended as a refreshing perspective for readers at all levels.