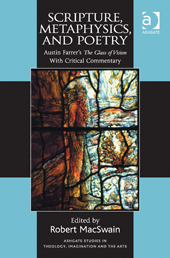 I first read Austin Farrer’s The Glass of Vision while spending a week at Gladstone’s Library in Flintshire, Wales. Shortly after returning home, I tracked down a used copy of Farrer’s text, and this just before learning that my friend Rob MacSwain was working on this critical edition. Perhaps like me you already have a battered copy, or perhaps you’ve never heard of Farrer or The Glass of Vision. In either case, we owe MacSwain a debt of gratitude as this edition not only re-presents, but improves upon, the original edition with a fine “Introduction,” the addition of copious footnotes, an excellent bibliography, and, in Part 2, six essays by scholars including our shared supervisor, the Revd Professor David Brown (who also translated Farrer’s Latin citations and phrases for this edition, identified most of the classical sources, and commissioned the Durham Cathedral “Transfiguration Window” from which the cover detail of “Moses at the Burning Bush” comes). MacSwain, no stranger to Farrer studies, co-edited The Truth Seeking Heart: Austin Farrer and His Writings with Professor Ann Loades, and just recently published his St Andrews dissertation Solved by Sacrifice: Austin Farrer, Fideism, and the Evidence of Faith.

The Glass of Vision is the published version of Farrer’s 1948 Bampton Lectures, eight sermons delivered in the University Church of St Mary the Virgin, Oxford. In some sense similar to Scotland’s Gifford Lectures,[1] the Bampton Lectures, which were made possible by the will of John Bampton (d. 1751), have been given since 1780.[2] “The subject [of this lecture series] is the exposition and defence of the Christian Faith as expressed in the Creeds, on the authority of Scripture and the Fathers.”[3]

More specifically, Farrer’s lectures address “the form of divine truth in the human mind.”[p. 15] And as MacSwain explains: “Farrer’s distinctive theory …  is that supernatural relation itself is conveyed, not in the more familiar categories of propositions or events, but through images, or more specifically through the ‘interplay’ of image and event.”[p. 4] Farrer begins:

The lectures which follow are no more than a modest attempt to state what I do, in fact, think about the relation borne to one another by three things – the sense of metaphysical philosophy, the sense of Scriptural revelation, and the sense of poetry. These three things rubbing against one another in my mind seem to kindle one another, and so I am moved to ask how this happens.[p. 12]

A volume such as this will no doubt appeal to a wide variety of readers – theologians, philosophers of religion, the theology/arts crowd – and I commend it to each and every one. A convenient and excellent resource that I hope finds its way to paperback so that it might find its way into libraries, yes, but also into homes and classrooms where Farrer’s fire might be kindled.

Editor’s Note: Readers who have made it this far might be interested in a recent series of posts on Farrer, the first from Michael Ward, a second from MacSwain, a third from Professor Ann Loades and a fourth from Regular Contributor Tim Allen.

[1] It is not uncommon for individuals to deliver both Bampton and Gifford Lectures, something Farrer himself did.  See Austin Farrer, The Freedom of the Will: The Gifford Lectures Delivered in the University of Edinburgh 1957 (New York: Charles Scribner’s Sons, 1958).
[2] The Gifford Lectures, made possible by the will of Adam Lord Gifford (1820 – 1887), have been delivered annually since 1888.
[3] “Bampton Lectures,” in The Oxford Dictionary of the Christian Church, 3rd ed. rev. (Oxford: Oxford University Press, 2005), 149.

Next week, Transpositions will be hosting a symposium on the Domestic Arts. Topics will range from domestic arts and place, woodworking, textiles, domesticity and worship, and baking…