For those individuals who are unfamiliar with his work, Andrew Peterson is a type of artistic Renaissance Man. In addition to the acclaim that he has received as a singer-songwriter [His albums have appeared at the top of the charts on both iTunes and Billboard in the Contemporary Christian Music category (CCM)], Peterson is an award-winning author, a filmmaker, publisher, and the founder of The Rabbit Room, a community of songwriters, authors, and artists that showcases podcasts and that hosts a yearly conference (Hutchmoot). Most recently, he launched a film and TV production company, Shining Isle Productions, to produce the animated film based on his bestselling books.

At the heart of his work is the persistent presence of narrative. Whether through the adventures of the Igiby children in his award-winning fantasy series for young readers, The Wingfeather Saga, or his numerous musical offerings, Peterson is an eloquent storyteller who guides the listener on a journey through the perils and joys encountered in life, yet always tinged with a glimmer of hope and awakening a longing for divine encounters.

After sitting down in 2008 for a fresh reading of C. S. Lewis’s, The Great Divorce, and reading N. T. Wright’s, Surprised by Hope, for the first time, Peterson began working on a set of songs that focused on the resurrection of Jesus. The result of that reflection was the release of his album, Resurrection Letters: Volume II (2008), which focused primarily on the ways that the resurrection plays out in our lives today. 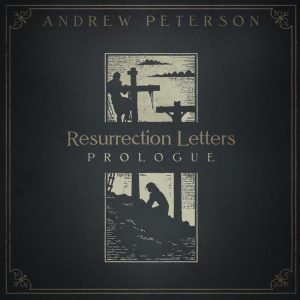 While the past may indeed be prologue, the release of Volume II prior to Volume I was much more than a mere marketing ploy. Rather, for Peterson, it was part of a larger vision focusing on both the historical event itself, as well as its significance for Christians past and present. Ten years later, he has completed the project by releasing two new albums, Resurrection Letters: Prologue (9 February 2018) and the much-anticipated prequel, Resurrection Letters: Volume I (Releasing this Friday 30 March 2018). [1]

Similar to Mel Gibson’s cinematic aim in The Passion of the Christ (2004), Peterson’s latest EP, Prologue, seeks to focus attention upon the physical and emotional anguish experienced in the death of Jesus and how it resonates in the hearts and minds of his followers. As he explained concerning his motivation for the album, ‘But it felt odd writing about Christ’s victory over death without spending at least some time on his death itself.’ [2]

The album was released in anticipation of Lent, the season of fasting that precedes Easter, and features a collection of five songs that takes the listener from the last words of Jesus on the cross to his internment in the tomb, ushering in the long wait for Sunday morning. In essence, it is difficult to fully appreciate the joy of the Resurrection without a complete understanding of the sorrow and pain experienced in the crucifixion; often, the light shines brightest in the darkness. As Peterson concludes, ‘My hope is that the listener would use those five songs during Lent and Holy Week to dwell on the terrible road Jesus had to walk in order to conquer not just sin, but the grave.’ [3]

The first song, ‘Last Words (Tenebrae)’, focuses on the last seven phrases that Jesus uttered on the cross, as recorded in the Gospels. Against the background of piano and soft percussion, it is a meditative song that interweaves these seven phrases, beginning with, ‘Father, forgive them for they know not what they do’ (Luke 23:34) and gradually adding a new phrase until they are all sung together, before finishing with the solitary statement, ‘Father into your hands, I commit my Spirit.’ (Luke 23:46).

On a secondary level, the composition mirrors the liturgical Holy Week service, ‘Tenebrae’ (Latin: a darkening), in which a series of candles is blown out one at a time after readings that reflect the brokenness of the world and the desolation of Christ’s abandonment on the cross. Like the candles being blown out, the phrases of Jesus slowly fade away until he commits his spirit into the Father’s hands.

In, ‘Well Done, Good and Faithful’, Peterson wrestles with the persistent and pervading question of why a good God would allow bad things to happen, especially the reason for allowing Jesus to suffer in such a manner. He continues looking at the words of Jesus on the cross—especially when he cries out, ‘My God, my God, why have you forsaken me?’ (Matt. 27:46; Mark 15:34)—and the anguish that Jesus experienced in the Garden of Gethsemane, knowing that he will soon experience an excruciating death. The entire song features the interplay between various messianic prophecies in the Old Testament—particularly Psalm 22 and Isaiah 53—and the humanity of Jesus, before settling on the answer given that Jesus endured the cross ‘for the joy set before him.’ (Hebrews 12:2) It is a natural progression from a focus on the last words of Jesus at his death to a concentration on the question of ‘Why?’ that continues to haunt the human condition.

The middle song, ‘The Ninth Hour’, refers to the time that the Gospels state Jesus took his last breath. It is a beautiful instrumental piece of music that acts as an interlude between the other four songs. After a focus on the words of Jesus, Peterson provides a wordless song that ushers in a moment of needed reflection on the events of Good Friday and the difficult questions being asked. This song is reminiscent of a cinematic score, though instead of watching a movie montage on a screen, the events of Good Friday are imagined through a prism of pain and uncertainty. It is not a somber piece, but rather a meditative one, that awakens the human longing for the happy ending, or what Tolkien called, Euchatastrophe.

The theme of loss continues into the fourth song, ‘Always Good’. Peterson explains that this song was born out of watching his good friend lose his wife after she gave birth to their first child. As he saw his wife’s body before they took her away, his friend kept crying out in agony, ‘Always good! Always good! God is always good.’ [4] It is a feeling that must have been felt by the disciples and other followers of Jesus as he took his last breath and darkness covered the earth. Similar to ‘Well Done, Good and Faithful’, the inability for humans to see the reasons behind suffering and pain leads often to the question of ‘Why?’ Yet, it is at those moments that faith steps in and the Christian must trust what they cannot see or understand. 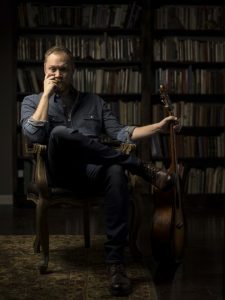 Once again, Peterson draws a connection between the suffering of Christ and the condition of his followers throughout the ages. It is Jesus’ suffering in his humanity that provides the opportunity for his followers to truly understand that he can relate to their pain. As theologians strive toward some sense of omniscience in their understanding of God and his revelation, the song is a humble reminder that God is indeed good ‘as we try to believe what was not meant to be understood.’

In the final song, ‘God Rested’, Peterson concludes his EP with the burial of Jesus in the tomb of Joseph of Arimathea. It is in this song where Peterson’s strength of narrative storytelling comes to the forefront. He presents a cosmic vision by connecting the creation story in Genesis with the story of the Passion, in which God performed his intended work in both stories, and then when it is finished, he rested on the Sabbath. As Peterson writes, ‘If it’s true that God is outside of Time, then it follows that he knew at creation, and when he established the Sabbath as a day of rest, that he was foreshadowing the Saturday when his son’s body would rest in the tomb.’ [5] He envisions a restlessness in the hearts of the Pharisees, Pontius Pilate and the followers of Jesus, while Christ rested after accomplishing his work. And yet, while the work is indeed finished, the story continues and all of creation is left waiting in eager anticipation.

In contrast to the myriad of events and messages that tend to permeate our everyday lives, this latest offering from Andrew Peterson is a beautifully written and performed set of songs that induces necessary moments of reflection to contemplate this historic event. As the extraordinary story of the crucifixion has become ordinary in modern times through repetition, Peterson takes his listeners on an emotional and imaginative journey that does not merely skip past Good Friday in order to get to the joy of the Resurrection. Rather, he forces us to dwell in the darkness, with all of its tension and discomfort, so that the events of Easter may indeed shine brighter and farther.

On Friday 30 March, I will be reviewing the third album in this project, Resurrection Letters: Volume I, on the day of its release.

Readers may purchase a copy of this album at The Rabbit Room, or at iTunes or Amazon.