Where the issue at heart in the text discussed previously in this series (Ethics and Images of Pain) is one of the ethics of representation, this text approaches the challenging issues of painful images from a different angle: that of the material of representation. The thirteen essays and two introductory chapters beginning each of the two sections of the book are concerned first with the images as objects and only secondly with the suffering of the individual subjects within the images.

Many critics of images of suffering (particularly photographic images) might caution that such an approach could be dismissive and disrespectful of the suffering individual(s) depicted (see Susan Sontag, On Photographs). By focusing upon the material nature, method, mode or format of communication of the representation rather than the represented subject, it is possible that the humanity and value of that subject would get lost, subsumed in the object-hood of their representation, and thereby be regarded as objects in themselves. This danger, however, does not appear to have become a reality. Rather, the editors have asked themselves necessary and compassionate questions around the ethics of approaching images of suffering as aesthetic objects. They write, ‘The historical question, Why is it important to study these images? – cannot be detached from two other more personal questions: why are we interested in these images? And why are we interested now, at the beginning of the twenty-first century? These are our questions, and as readers, they are also yours’ [xiii]. And while ‘ethical looking’ is not of primary concern, these questions open the door to that discussion, and aspects of it appear throughout the book. 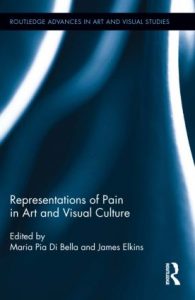 This book is structured in two parts, each exploring one of two categories into which the editors believe images of pain can be sorted: ‘those in which pain was assigned an expressive value, and those in which it was not’ [3]. Part one is introduced here, in this week’s review; part two will be covered next week.

The first section, introduced by James Elkin, consists of six chapters, beginning with chapters on the physiognomic and pathognomic origins of artistic representations of pain; the positive place of ‘faked’ pain in artistic recreations of historic violence; and (perhaps most disturbingly) self-inflicted pain as performance art communicated through photography. The fourth chapter explores (and corrects) Susan Sontag’s Regarding the Pain of Others as it refers to the work of Georges Bataille. The fifth discusses ‘what painful photographs…entail in the viewer’ [10]. And finally, the sixth chapter focuses on photographs of the Chinese torturous execution method of Lingchi. This first part of the book closes with an attempt at ethical accountability. The art historian Holly Edwards considers the writings and themes of this section, responding to the editors’ concern that they may have ‘inadequately articulated’ the ‘personal nature of this material’, especially in terms of its implications for ‘responsibility, judgment and desire…’ [10].

Editor’s note: This is the second in a three-part review of two books in Routledge’s ‘Advances in Art and Visual Studies’ series. The first section of this book is covered in the preceding review.

Thomas is an Anglican Priest and a vocational photographer. He is currently living out these vocations serving the Scottish Episcopal Church in the towns of Leven, Glenrothes, and Lochgelly, within the Diocese of St. Andrews, Dunkeld and Dunblane. Under the supervision of David Brown, Thomas is also exploring questions of how photography might be positively created, used and experienced in religious contexts as a doctoral student at St. Andrews.

~ by Jenn Craft and Anna Blanch In part I of this post, we looked briefly at the way in which subsuming craft into…