Jeremy Begbie’s Redeeming Transcendence in the Arts is a theological response to the pervasiveness of ‘transcendence talk’ in contemporary conversations about the arts. As his title suggests, Begbie believes such talk needs ‘redeeming’. He argues that this eagerness to reflect on the arts using ideas of the ‘spiritual’ or ‘transcendent’ is ‘worth exploring seriously’ but warns against an uncritical acceptance of all ‘purported rumours of transcendence in the arts’ [pp. 2-3]. The purpose of the book is to use Christian Scripture to tie the language of transcendence to the Triune God of Christian tradition, thus providing the theological focus and specificity Begbie believes is necessary to be able to interpret and evaluate these ‘rumours’, and to offer appropriate examples of how art might bear witness to this particular understanding of transcendence.

The introduction provides a basic definition of transcendence and then introduces the context of ‘Postsecularity and Suspicion’ out of which Begbie believes contemporary ‘transcendence talk’ is emerging. In the opening chapter, Begbie addresses an approach to theology and the arts which works 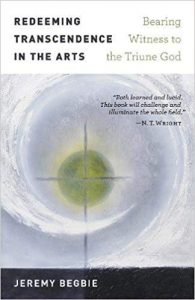 with religious experiences in ‘culture at large’ and avoids placing limits on the areas of human activity in which transcendence might be encountered. Using representative examples, Begbie notes that this is a stream of thought which allows the arts to be ‘heard in their own right’ first [p. 21], rather than using predetermined theological criteria to assess first-hand, personal experiences of art. In chapter two, Begbie ties this influential approach to the tradition of the ‘sublime’, using this association to ground a theological critique of the assumptions he believes characterise this trend within contemporary theology. The third chapter offers an alternative account of transcendence, using selected excerpts from the Gospel of John to illustrate how Begbie thinks ‘Scripture’s unsettling strangeness’ ought to ‘form and re-form our understanding of divine transcendence’ [p. 78]. Chapter four returns to the question of the arts, suggesting how they might bear witness to this ‘reconfigured transcendence’ [p. 128] by offering analogues or metaphors for the alterity and uncontainability of the Christian God, as described by Scripture.

The book is notable for the skill with which it distils the key questions surrounding theological aesthetics today, offering a lucid, insightful account of what is at stake. It also represents an important reminder of the value of creating dialogue between the arts and scriptural narratives, which could encourage a more ‘positive’ view of divine transcendence that emphasises God’s direct involvement with creation. Begbie contends that theologians are paying too much attention to an apophatic ‘fascination with unspeakability’ within the arts [p. 33], and that a ‘recovery of confidence in the sheer profundity and generativity of the church’s core confession’ is required as a corrective [p. 185].

Underlying this argument is a suspicion of all art, especially abstract art, which might invite us to ‘take flight from the church’s obligation to scriptural words’ [p. 173]. Any experiences of transcendence within the arts which cannot be tied to this verbal tradition are liable to be dismissed, as Begbie’s ‘reconfigured transcendence’ becomes a means of determining ‘ways in which this or that art – or this or that account of the arts, might fall short, or be questionable theologically’ [p. 128]. There is a danger in this approach that huge swathes of human experience and cultural endeavour could be overlooked in favour of art which witnesses more directly to the self-disclosure of the Christian God attested in Scripture.

Working with a broader, more generous definition of transcendence might help theology to avoid shutting out those who find themselves on the uncertain peripheries of faith.

Begbie is undoubtedly right to warn of the risks of working with experiences of transcendence which occur outside the controlling influence of the Christian tradition, but this warning could easily lead to an unjustifiable restriction of the scope of divine revelation.

Another possible difficulty in Begbie’s approach is that the foundations upon which he bases his reconfiguring of transcendence may not be as stable and objective as he appears to suggest. His appeal to scriptural specificity, as found in the Gospel of John, touches on matters like the precise meaning of the Logos title and the significance of the Johannine Passion, which are highly contested. To treat his own interpretations as ‘the singular perspectives opened up by Scripture’ [p. 4] and contrast them with the ‘cloudiness and irresolution’ of other approaches to religion and art [p. 5] could be considered misleading.

Despite his criticism of alternative approaches, Begbie makes clear that this book is intended to ‘open up conversation’ rather than shut it down [p. 13]. By drawing several different accounts of the relationship between theology and the arts into a dialogue and setting out the issues such a dialogue raises, Begbie demonstrates his impressive knowledge of the field and his commitment to generating further debate. Consequently, this work is vital reading for anyone seeking to join the conversation.