Fittingly, the title of Peter Berger’s valuable little book on comedy contains a polite pun. The first two words play with the notion that laughter itself is redeeming, and that the study of comedy is due more serious attention than it has received. If the former sense is true, then the latter follows.

In the opening pages, Berger points out that ‘there is a relative paucity of writings about the nature of the comic as such, certainly if compared to the libraries of books about the nature of truth, goodness, and beauty’ (xvii). Having surveyed the current literature myself, this statement is as true when the second edition of this book was issued in 2014, as when Berger first stated it in 1997. Comedy is critically (in many senses of the word) undervalued. 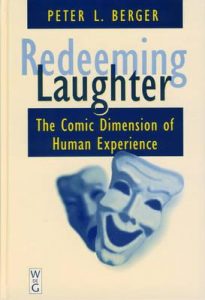 Reasons for this inattention to comedy are many, but perhaps the most prominent reason is the inherent incongruity of writing seriously about comedy. In writing solemnly about jokes, the author (or reviewer) becomes one himself. As Berger notes, ‘[P]eople who write books on the comic are legitimate targets for parody, satire, and other aggressive modes of the humorous response to intolerable seriousness’ (xix).

Nevertheless, the majority of Berger’s book is given to making the case for the value of the embarrassing enterprise. Humor has a redemptive power, salving wounds but also signaling transcendence. Humor’s redemptive capacity is woven into the makeup of mankind. Humor is ‘exclusively human…[and] also universally human’ (13).

Part 1 lays out a preliminary understanding of the nature of the comic and its source. Berger navigates the varying philosophies of humor, rightly identifying incongruity theory as the best account on the market. Humor’s amused perception of incongruity arises universally because, as Berger states, humanity itself ‘is in a state of comic discrepancy with respect to the order of the universe’ (33). We perceive that things are not as we wish them to be, nor even as they should be, and can find humor in the disjuncture.

However, Berger is aware that not all contradictions are funny. The tragic, as well as the comic, trades on incongruity. Nevertheless, Berger finds a deeper intimation of religious truth in comedy, suggesting that it may be seen as ‘an antechamber to religious faith’ (26). How significant this connection to religious truth might be is explored more in Part 3.

Part 2 offers a schematic overview of humor’s differing powers. In separate chapters dealing with the comic as diversion, consolation, game of intellect, satire, and absurd folly, Berger undertakes a closer examination of specific authors, such as P. G. Wodehouse or Sholem Aleichem, embodying diversion and tragicomedy, respectively. As Berger points out, both of these forms of comedy offer an alleviation from the pains of life. Wodehouse’s blithe romps and benign humor ‘provide mellow amusement that make it easier to get through the day’ (93). Tragicomedy like Aleichem’s likewise softens the blows of life, consoling us by finding laughter in the midst of tears (110).

In this section, and throughout, the reader will often be reminded, and sometimes frustrated, by Berger’s sociological interest, which often send him seeking more obscure sources when more obvious ones lie closer to hand and might be of greater natural interest. There are excurses into Asian and Jewish humor (both valuable). However, the sections discussing satire and absurdity dwelt on less canonically significant figures (Karl Kraus and Alfred Jarry), while this reader longed for more discussion of Voltaire or Swift; Beckett or Kafka.

A repeating element in Redeeming Laughter is the similarity between comedy and theodicy. Humor can alleviate suffering practically, brightening a bad day or cheering us in the midst of sorrow. In Part 3, Berger calls this immanent comic effect, ‘transcendence in a lower key’ (190). The interruption of the comic in common life conjures a delightful play world where ordinary rules and assumptions are suspended. Through joyful laughter, jokes assert that, despite our fallibility and foolishness, everything is alright.

In this sense, they offer a miniature eschatological comfort, ending weeping and wiping tears. An important question in Berger’s book is whether the comic offers any sort of “higher” signal. The answer to this question is ambiguous, like the meaning of the book’s title.

In first pages of the book, Berger describes himself as a “heterodox” Lutheran (xv). Both of these self-described elements are significant in assessing the religious implications of his work. In one sense, the book is an exercise in theology “from below.” It might be mistaken for a work of natural theology, except that Berger does not (as far as I can tell) commit himself seriously to any theological propositions. Yet he does think that, through the eyes of faith, we can see that comedy, not tragedy, tells the greater truth about the human condition (195). Here Berger’s Lutheran immersion in Kierkegaard comes through, as he seems willing to assert the validity of both an “empirical” (read as, tragic) perspective and a “religious” (comic) perspective. No this-worldly evidence can justify the leap of faith. But after the leap, comedy can be seen to signal transcendence in a “higher key” (195).

This final separation of transcendence in the lower and higher key leaves this rationalist longing for something more, an account of how the universal phenomenon of humor can count as genuine evidence for the truth of a comic worldview. But Berger has offered enough already, and this request is really just asking him to write the book I would want to write. The thoughtful and witty book he has written is good enough. Berger’s helped to redeem comedy by showing its scholarly value, sociological importance, and theological promise.