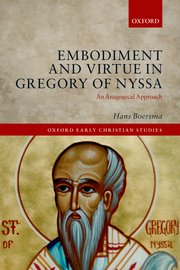 Hans Boersma’s interests in sacramental ontology and ancient Christian expressions of Platonic categories have taken his research further back into history than his earlier works such as Nouvelle Théologie and Sacramental Ontology: A Return to Mystery (2009) and Heavenly Participation (2011). Although motivated by the same interests, Embodiment and Virtue in Gregory of Nyssa is an altogether different read.

He aptly notes in the Epilogue that “this study presents a rather traditional historical theological investigation into Gregory of Nyssa’s understanding of embodiment” [247]. What Boersma means by this is that he does not use Gregory to argue for his own interests (sacramental ontology), nor does he use Gregory as a teacher to correct contemporary shortcomings. It is not that Gregory is without anything to offer, but rather Boersma thinks Gregory’s “theology of participation needs to be deepened so as to include more genuinely the material world as in some way participating in the life of God” [249].

Boersma’s historical account is not, however, undirected. He pushes the destruct button on numerous modern reads of Gregory, most notably Rowan Williams, Fr. John Behr, and Mark Hart. These scholars, according to Boersma, project contemporary concerns of embodiment onto Gregory’s theology while overlooking the central role anagogy plays in his thought.

Anagogy, for Gregory, simply means participation in the life of God—theosis (deification). In all seven chapters, covering a variety of topics, Boersma demonstrates how central anagogy is to Gregory’s theology. For example, according to Gregory time and space (ch. 1), like all created order, are diastemic (have extension) and thus are not permanent. There is no extension in the Creator for in Him there is no interval or sequence. Time for humans is a stepping stone towards infinity and eventually must be overcome. Gregory both laments extension for the way in which it limits us and praises it for being the means by which we ascend into life with God (theosis). This “love-hate” relationship with creation extends throughout his writings to expose how embodied existence is temporary and must be overcome.

The overcoming of this life is where virtue comes into play. It is through virtue that one overcomes temporality and so it enacts the movement towards eternal life. Again, following the same logic, extension is the setting and means through which we live virtuously. Therefore, extension is necessary and is a limited good that is eventually transcended. This argument becomes fascinating when applied to biblical exegesis (ch. 2). Scripture is subject to time and space and so in the same manner as anagogical ascent scriptural interpretation must go beyond the literal and historical reading. To stay within the literal and historical interpretation is to stay within the limits of extension and thus it is only a surface read. In order to avoid being a slave to the letter one must take an interpretive turn–the “‘turn’ that opens up the ‘enigmas’ in the text…which allows us to move from the beauty of the bodily text to participation in the life of God himself…. The textual body of Scripture is a measured body; and Nyssen believes we do justice to its limitations only by means of anagogical transposition” [54].

Although the book is aimed at the patristic scholar, fortunately its lucid prose and well structured chapters make it accessible to the non-specialist. Gregory’s anagogical and otherworldly emphasis offers a refreshing challenge to our modern sensibilities, and certainly must be wrestled with by anyone who is interested in embodiment and broad sacramentality. Like everything else that Boersma writes, Embodiment and Virtue in Gregory of Nyssa is worth the read.

Dr. Andrew TJ Kaethler is Assistant Professor at Catholic Pacific College where he teaches theology and philosophy (or anything remotely related). He completed his PhD in 2015 at University of St Andrews.

In his review of Rachel Held Evans’ recent and somewhat controversial book, A Year of Biblical Womanhood: How a Liberated Woman Found Herself Sitting…