The collection of essays that comprise Kevin Vanhoozer’s Pictures at a Theological Exhibition animates his lifelong project of bridging the dichotomy between the theory and practice of theology. At stake is nothing less than an understanding of theology that equips the church to effectively practice discipleship and evangelism within rapidly changing, twenty-first century contexts.

Vanhoozer addresses the truncated understanding of theology embraced by many in the contemporary church, who view theology ‘as a system of doctrines that demand to be thought and professed but not necessarily embodied and practiced.’ (12) In this view, the imagination is often dismissed as a ‘flight of fancy’ (27) or as a ‘purveyor of false images’ (19), yet Vanhoozer’s approach to the imagination could not be more different. As his preface makes clear,

When captive to Christ, the imagination is the capacity to envision all of reality as related to God the Father in the Son through the Spirit. And to the extent that the vision of a God-so-loved-world orients all of life, it is a capacity that is as practical as it is theological. (10) 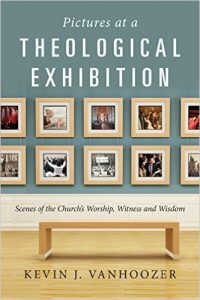 A robust, biblically informed imagination integrates the theory and practice of theology because it invites believers to more fully embrace what Vanhoozer posits as the essence of reality. He contends, ‘To see the world and ourselves with theodramatic imagination is not to live in a fantasyland but in evangelical reality: the reality of a world where God’s Word has entered and is presently active, and to which it will return again.’ (39)

To Vanhoozer, Christianity is intrinsically dramatic; that is, at the heart of the gospel is the proclamation of what God has said and done in history through Jesus Christ for the sake of the whole world. Vanhoozer’s emphasis on the theodramatic imagination stems from his earlier work, notably The Drama of Doctrine: A Canonical-Linguistic Approach to Christian Theology and Faith Speaking Understanding: Performing the Drama of Doctrine, in which he extensively explores the dramatic nature of Scripture and the Church’s role in performing it. Yet unlike his more academic work, the ‘scenes’ Vanhoozer depicts in Pictures at a Theological Exhibition follow Modest Mussorgsky’s 1874 musical composition (of the same title) and Viktor Hartmann’s accompanying artwork to provide glimpses of the evangelical imagination in action.

The essays are divided into three central sections, or ‘galleries’, each of which contains ‘scenes’ of the imagination invigorating the church’s worship, wisdom and witness. While the interrelated nature of the church’s worship, witness and wisdom made the book’s material a bit repetitive, and its divisions into three distinct galleries seem somewhat artificial, repetition does leave the reader little reason to question that, in Vanhoozer’s view, the task of theology is essentially practical. As he puts it, ‘The drama of the Christ is the Christian touchstone by which we discern and do truth.’ (175) This take on the inherently dramatic relationship between theology and the imagination offers a fresh paradigm for living the way of Jesus in the world today. As Vanhoozer explains,

The church needs to inhabit the biblical picture—the theodrama for short—as we live day by day, minute by minute as would-be followers of Jesus who desire above all else to have our thoughts and lives correspond to the gospel. To do this, we have to keep the gospel story ever in mind, together with its Old Testament presuppositions and New Testament implications, and we have to view the story of our own lives in light of the story of Jesus. That requires a sanctified imagination set apart for the purpose of making these connections. (46)

The sanctified imagination beckons the church to perceive the kingdom of God in her midst because it serves a fundamentally integrative function, synthesizing seemingly unrelated experiences and events into the overarching drama of redemption. While some readers might have benefited from more concrete examples of what the sanctified imagination looks like in the context of daily life and discipleship, Vanhoozer constructively illustrates how such an imagination is oriented by the eschatological ethos intrinsic to corporate worship, especially as conveyed in song and as celebrated in the Eucharist.

Because we are always, at all times and in all places, worshiping something or someone, the formative nature of worship shapes us in the image of what or whom we worship. It is in and through praise of ‘the God who raised Jesus from the dead’ that ‘a sense of being-toward-resurrection’ is generated within the Christian. (140) This new type of consciousness permeates all of life to the extent that doxology becomes ‘the Christian’s every day mode of being-in-time.’ (140)

The demonstration of this kind of knowledge is part and parcel of acting wisely. As Vanhoozer puts it,

Wisdom is the ability to see how Christ is the center of the both the created and the renewed order, and thus to see the place of disciples in the grand scheme of things. Being wise unto Christ involves not merely assenting to but practicing what we know. (195)

Doctrine that sets forth what is in Christ requires a robust eschatological imagining, a faith-based seeing that perceives what is not yet complete—our salvation—as already finished, because of our union with Christ . . . Wisdom leads to human flourishing only because it lives out a knowledge that corresponds to the way things are eschatologically (not empirically). (237)

Gathering at the Eucharistic table profoundly embodies biblical wisdom by proclaiming and performing the eschatological reality confessed in Christian doctrine. As Vanhoozer puts it, ‘When we celebrate the Lord’s Supper, we enact the climax of the drama of redemption—the creation of a new, unified body of Christ, in which there are no racial or social or economic divisions.’ (248)

What Vanhoozer describes as ‘eschatological imagining’ strikes me as a refreshingly biblical, hope-infused manner of being the church in and for the world. Although Christians boldly profess that ‘the kingdom of the world is become the kingdom of our Lord’ (Revelation 11:15), the pain, brokenness and frustration experienced in our fractured world at times make that claim barely believable. It takes tremendous faith to dwell within what is already the case but not yet fully realized. One day, evil will finally be done away with, all wrongs made right and every tear wiped away. The sanctified imagination provides the dramatic framework through which the church might live, move and find her being until that day is at hand.

For my part, the mode through which Vanhoozer conveys his essays as ‘scenes’ of the evangelical imagination in action substantiates his careful argumentation, systematic thinking and precise diction to form a compelling case for the liberation of the evangelical imagination. Pastors, theologians and laypersons concerned with doing theology well are sure to benefit from the creative, Spirit-led approach to discipleship and evangelism set forth in Pictures at an Exhibition.

Mary Frances Dunlap completed her MLitt in the Institute for Theology, Imagination and the Arts (ITIA) at the University of St Andrews in 2016. For her dissertation, she considered the diverse ways in which the music of Handel’s Messiah conveys the truths of the biblical narrative. After graduating from Rhodes College in 2011, she completed a fellowship at the Trinity Fellows Academy, where she developed a vision for ministry that involves the whole person in embodied worship.

Star Trek is one of the most successful American TV and Film science fiction franchises.  It includes six TV series (The Original Series, The…